An Afternoon at Snape and Aldeburgh 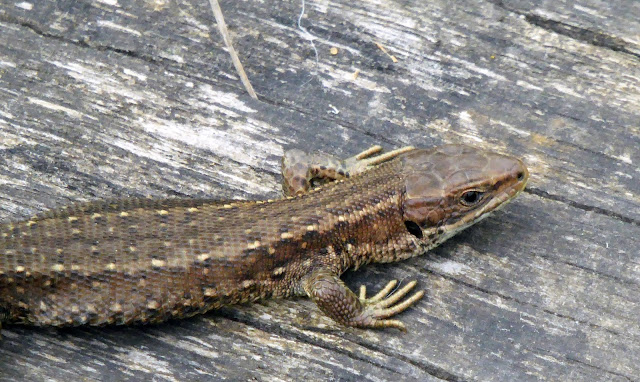 The forecast was not very promising, but when we reached Snape Maltings yesterday afternoon the sun appeared and it was sufficiently warm for a small Common Lizard to venture out of the reedbed. Lizards are not only wary of humans but they are also protected under law, so this photo was taken with my zoom lens extended. The camera has focused on the thorax: what intricate designs these lovely reptiles have. 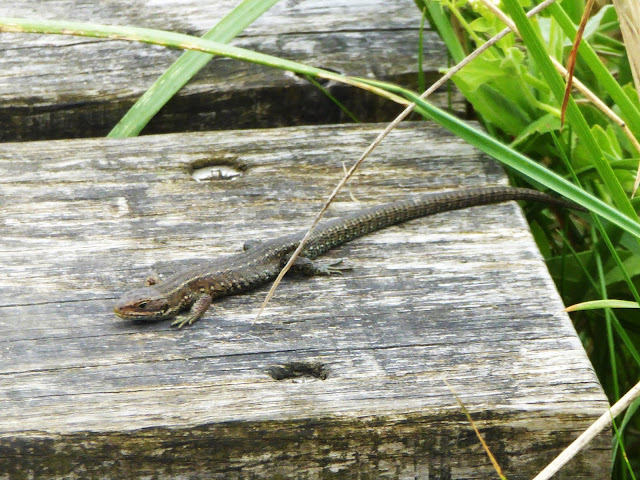 I have no idea whether the skin patterns are entirely for camouflage in this species or whether colour and appearance play any part in mating rituals. You can read about some Aegean Wall Lizard research on this topic here.

The photo above shows Snape in the hazy sunshine. 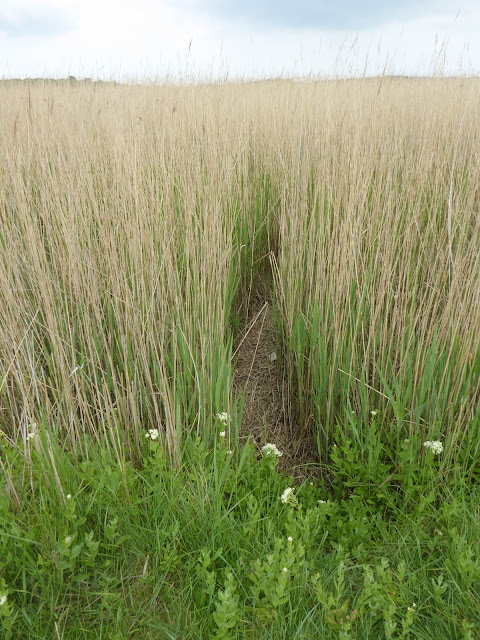 Some creature, possibly a deer, has carved out a private path through the reeds. 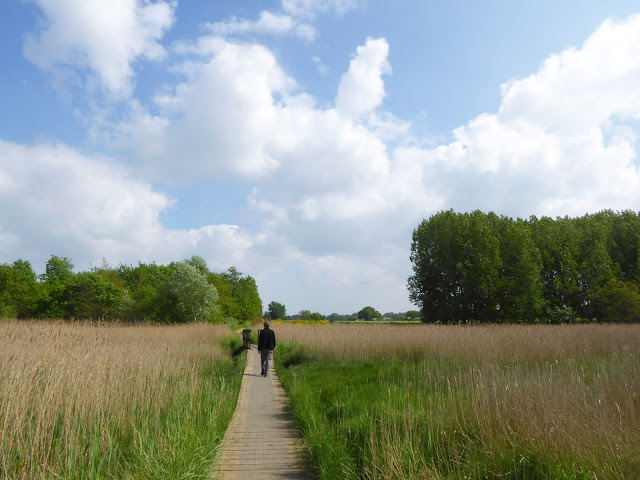 Humans can walk through the reedbeds in the direction of Iken on this slatted boardwalk. 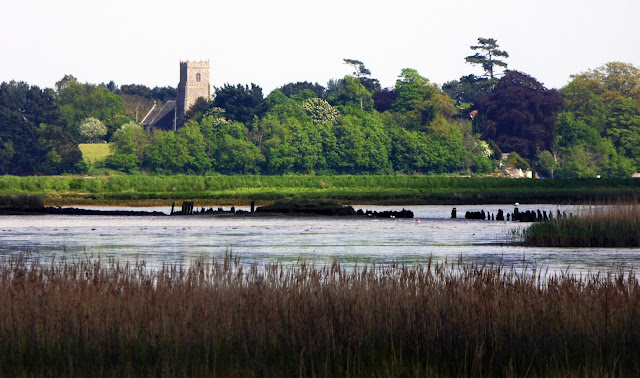 The light was very strange at this point, but the iconic tower of Iken Church, dedicated to St Botolph, was very prominent on the far side of the water. 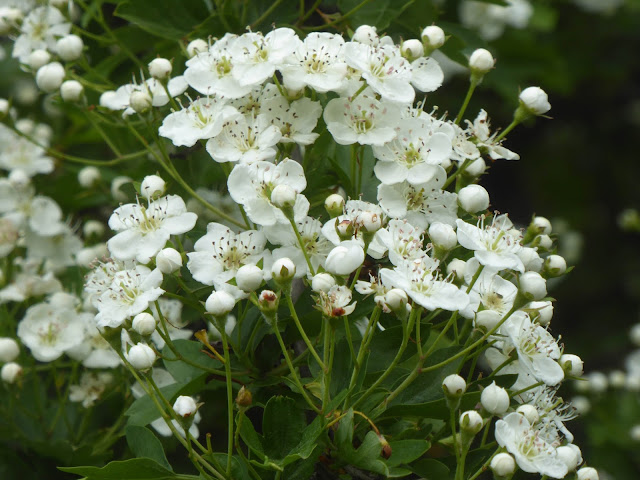 Hawthorn, also known as May, blossom was bursting into flower. We left Snape, and since the afternoon was still dry, we moved on to Aldeburgh ... 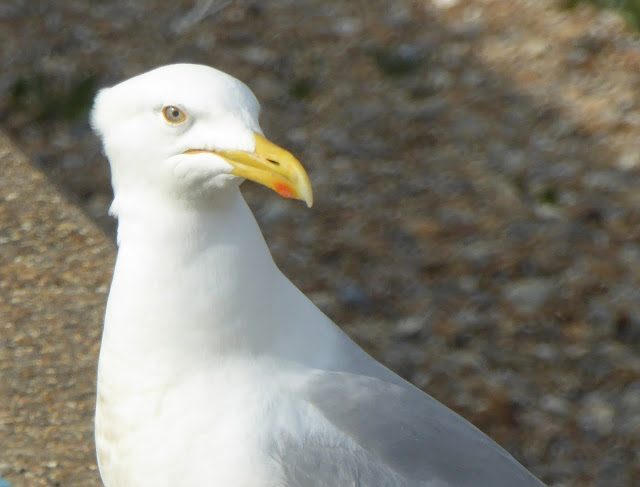 ... where we were greeted by this rather fierce Herring Gull. 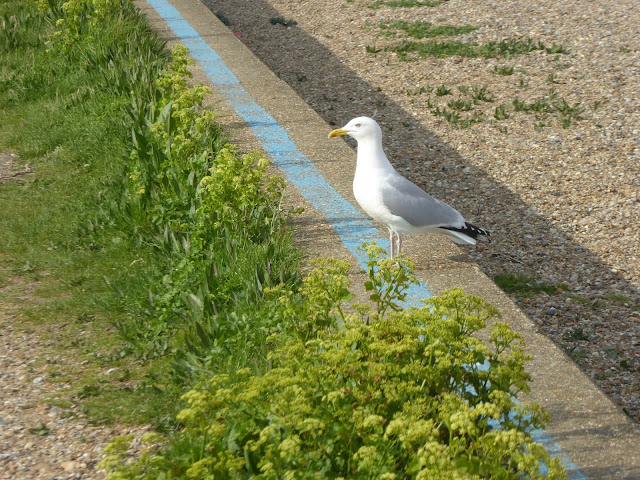 I am not sure what the blue line signifies, but this is where the gull chose to stand on patrol. 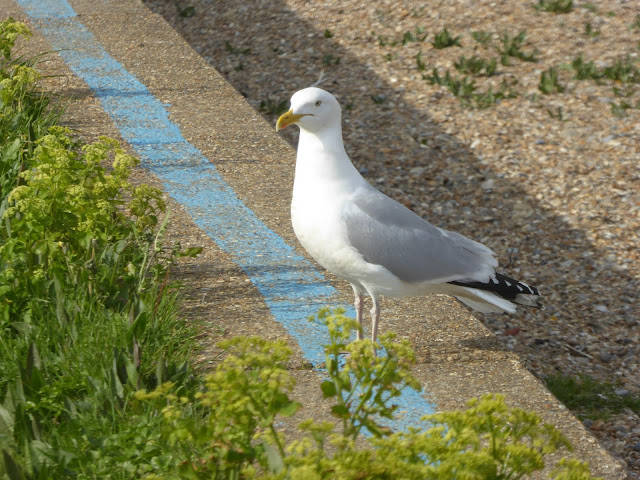 I saw a couple of people eating fish and chips in a car as we left, so perhaps the bird knew that it was in exactly the right place for its favourite snack. 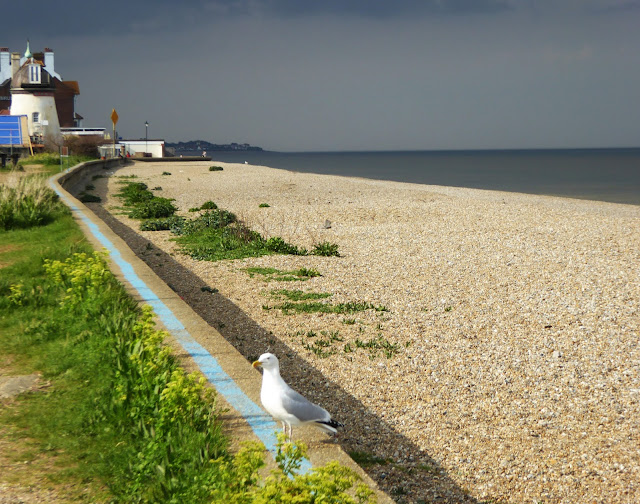 It began to look as though the promised rain was on its way. In fact, we somehow seemed to avoid it, so perhaps the storm broke out at sea. 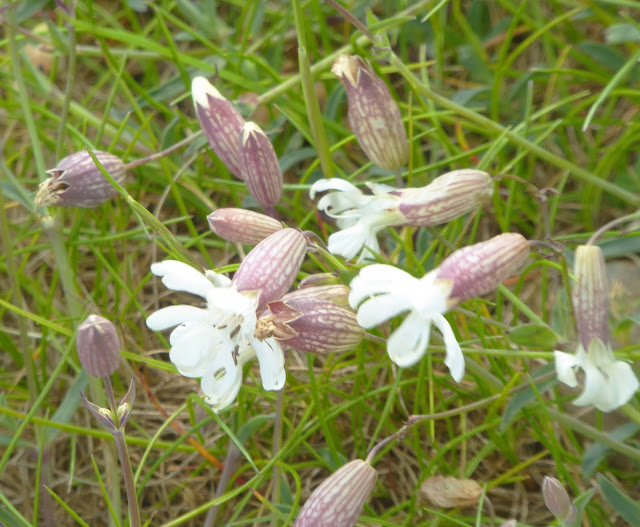 It is always a joy to see the emergence of summer flowers, and the Aldeburgh area has some unusual coastal varieties. This was the first Sea Campion I had encountered in 2018. 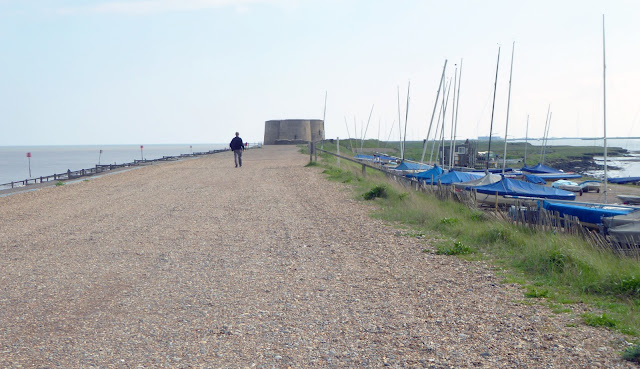 David walked on towards the martello tower. We could see Orford lighthouse in the distance and the eerie defence 'pagodas' on Orford Ness. 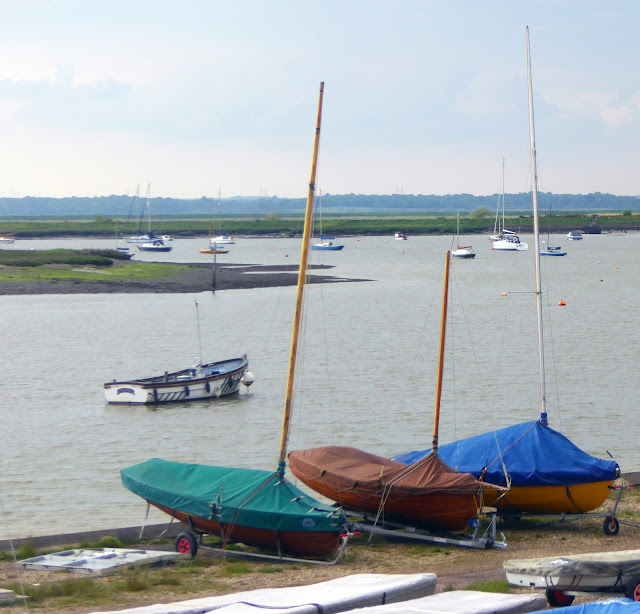 This was the view on the landward side of the path. This water-bound area, just south of Aldeburgh and around the river Alde, is known as Slaughden. It was once a vibrant commercial centre. The tide has already claimed so much of this fragile maritime environment. 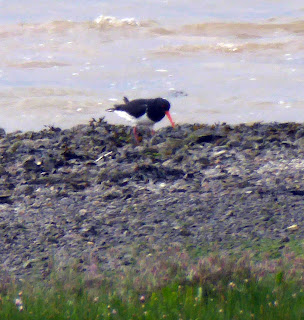 Oystercatchers were calling on the landward side of the path, 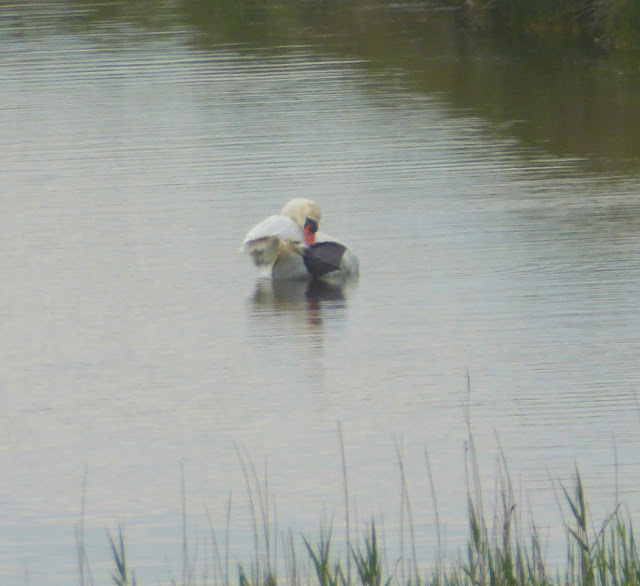 ... and a Mute Swan was doing a spot of preening. Look at the size of that webbed foot!
Meanwhile, out at sea ... 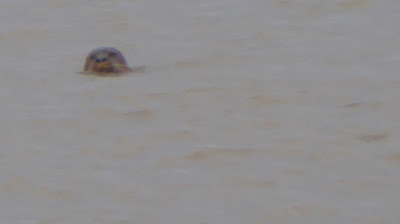 ... the beautiful head of a seal was bobbing up and down. The photo above was the best my camera produce as the seal was quite a way out in the deeper channels and the light was very stormy.

Back home in the garden, it was good to see a variety of Soldier Beetle I had noted in May last year. 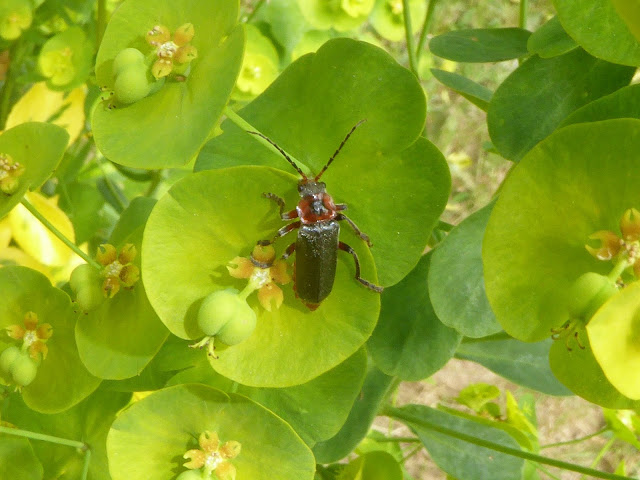 There were several Dandelion clocks on the lawn.. 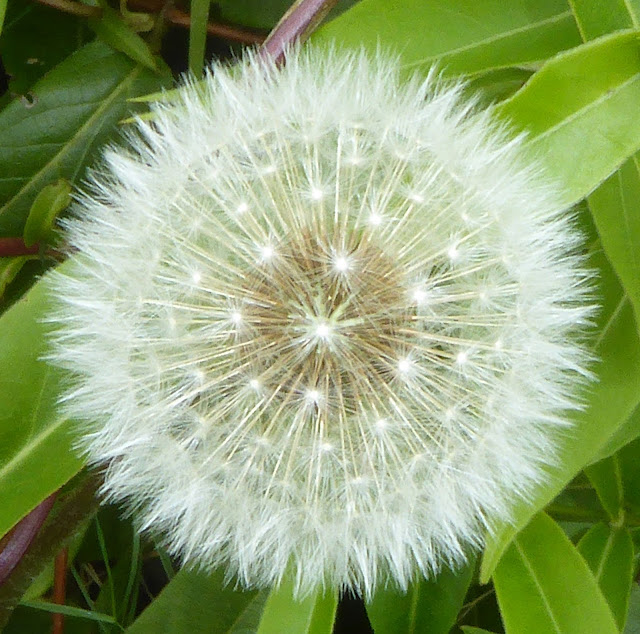 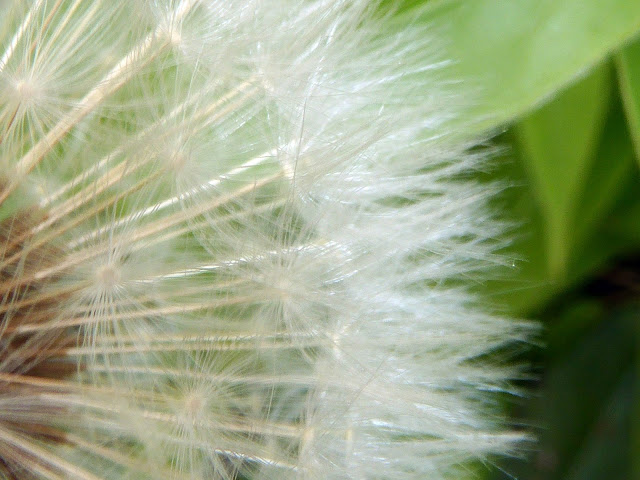 ... will return before long. 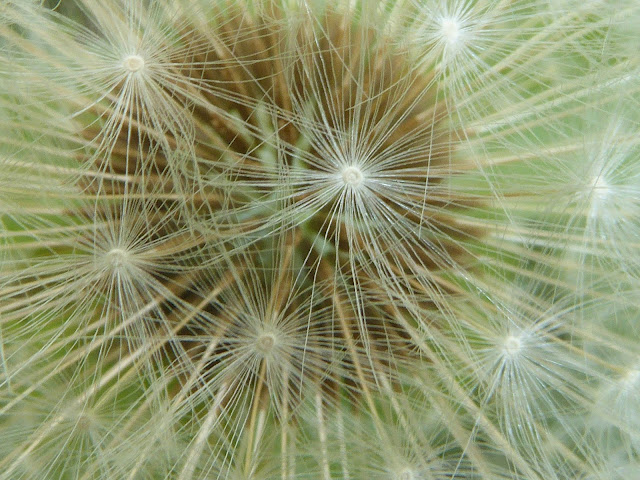 Your afternoon walks take us with you. Just wonderful, Caroline.

Hello, what a lovely spot for a walk. I like the cute lizard and the seal. Great captures of the gulls. The Oystercatcher is a favorite too. Wonderful photos. Enjoy your day!

Caroline - this post just kept getting better and better … I am surprised to see a lizard with such a long tail. I loved the shot of the church from across the water. But you took my breath away with the close-ups of the dandelion clocks - stunning!