Butterflies in the 'French Garden' at Oxburgh Hall, Norfolk 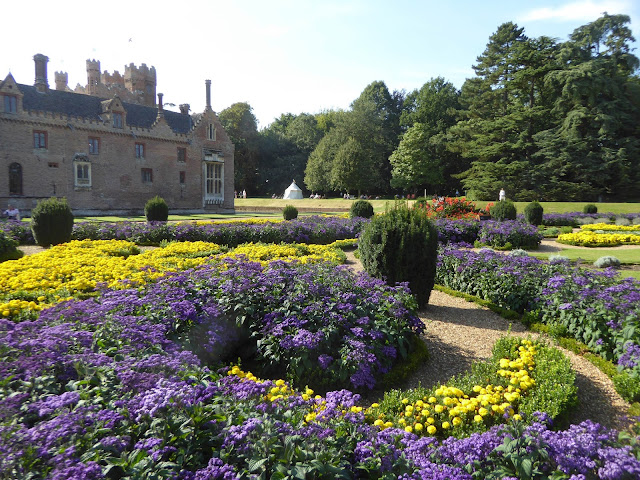 Summer is my favourite season at NT Oxburgh Hall because the gardens are not only a blaze of complementary colours but are also alive with beautiful butterflies. This was the view of the parterre, known as the 'French Garden', on Bank Holiday Monday. 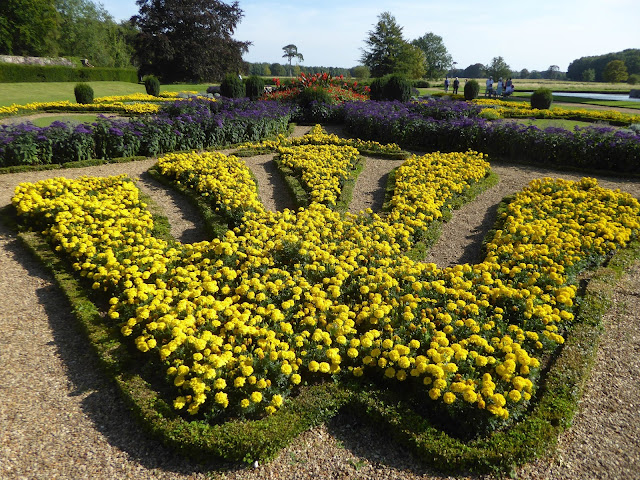 The Marigolds were looking good... 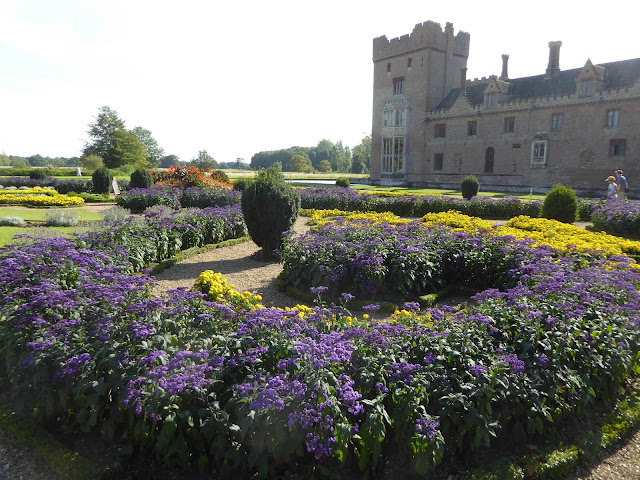 ... and the Heliotrope had almost tripled its normal size. You can probably just see how much taller it is than the Marigolds. 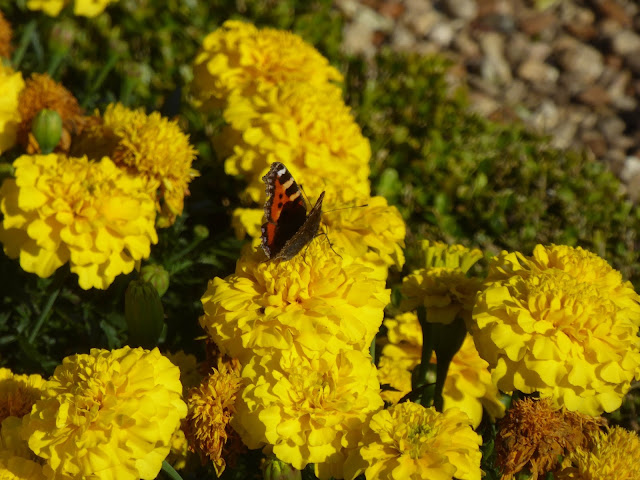 And yes, there were butterflies! It was terrific to see good numbers of Small Tortoiseshell. 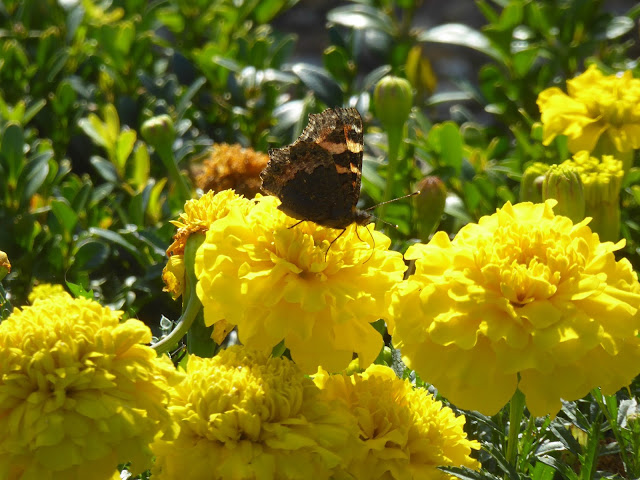 Frustratingly for the photographer, most of these beautiful creatures kept their wings closed when they were not airborne ... 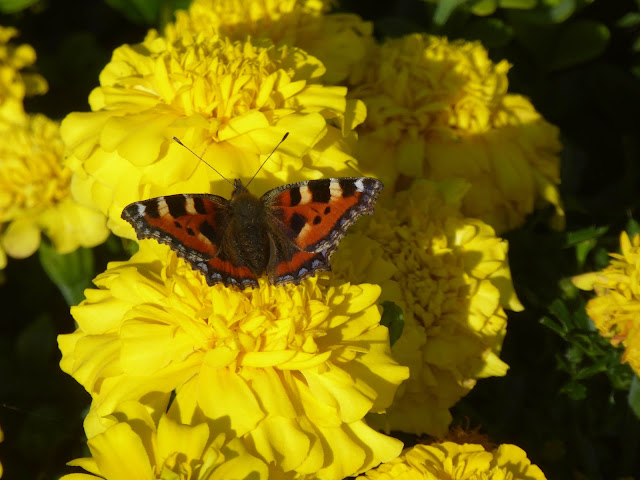 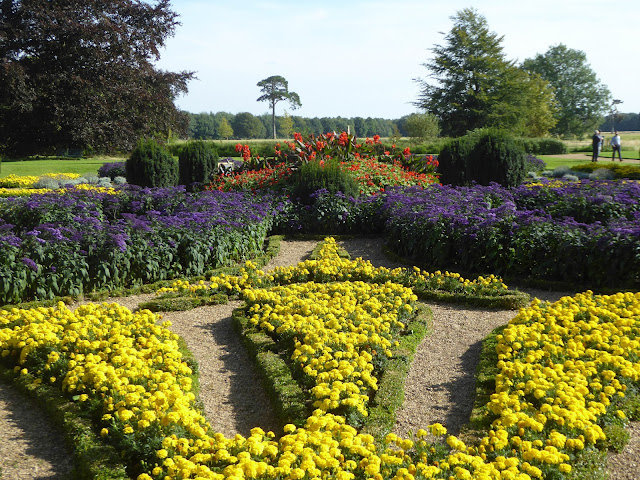 I included this photograph because it shows the flame-coloured flowers of the Canna Lilies in the centre. The parterre was laid out in 1848 and follows a design from an early 18th century publication. 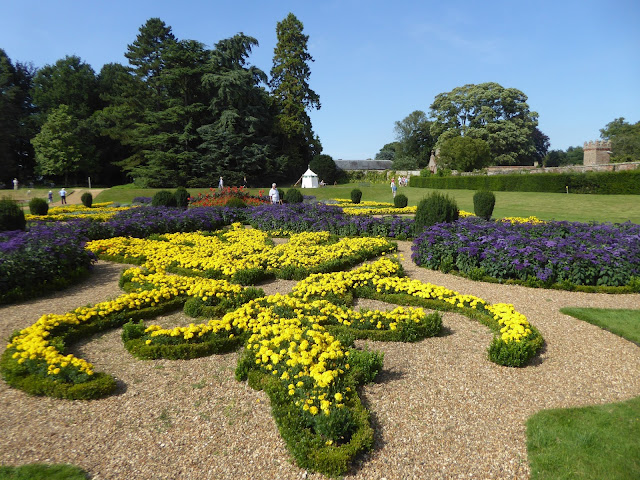 This is the view in the other direction. 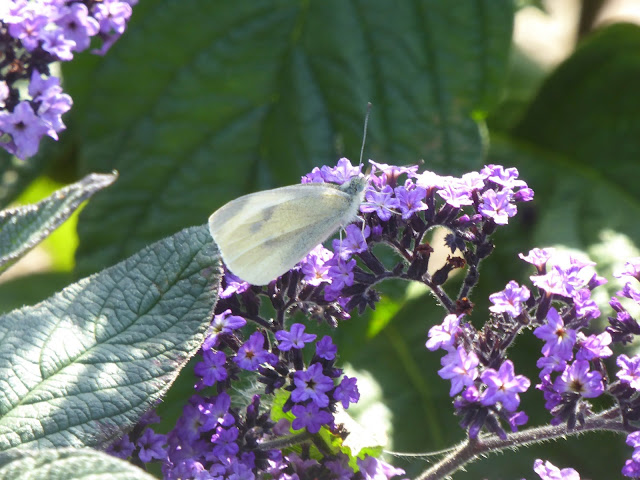 Sadly I didn't see a single Painted Lady: normally there are quite a few on the Heliotrope. However, there were a few Small Whites, nectaring in the sunshine. 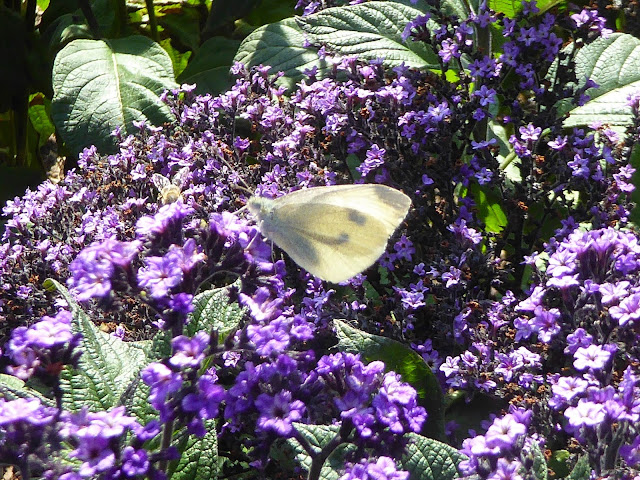 The Honey Bee below was also hard at work. 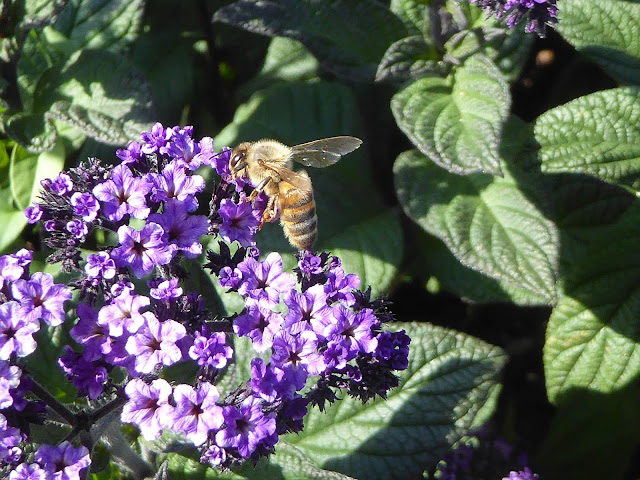 The Herbaceous Border along the wall usually attracts a good number of Peacock and Red Admiral butterflies. This year I saw a few Small Whites, but only a single Red Admiral. The flowers were magnificent. 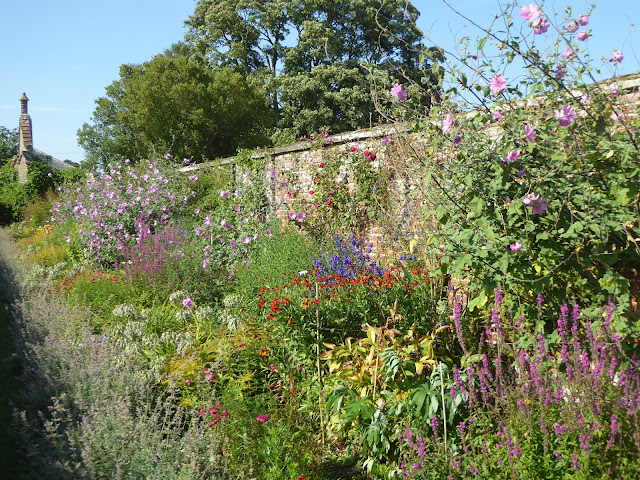 This was the lone Red Admiral... 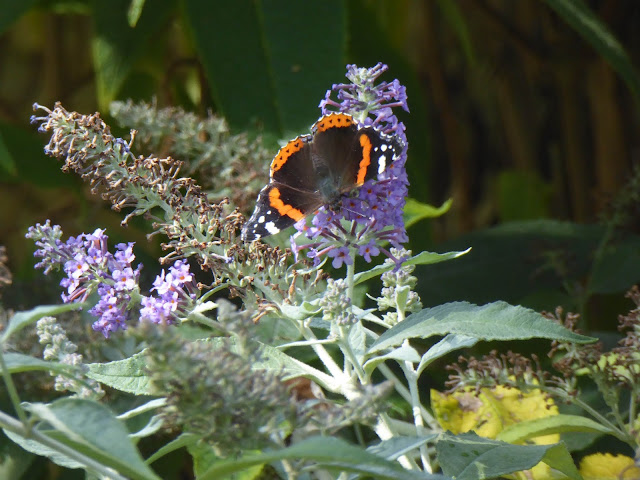 There were a few dragonflies in the air but few of them landed. The one below, however, perched on a branch near the churchyard wall for much of the time we were eating our picnic. 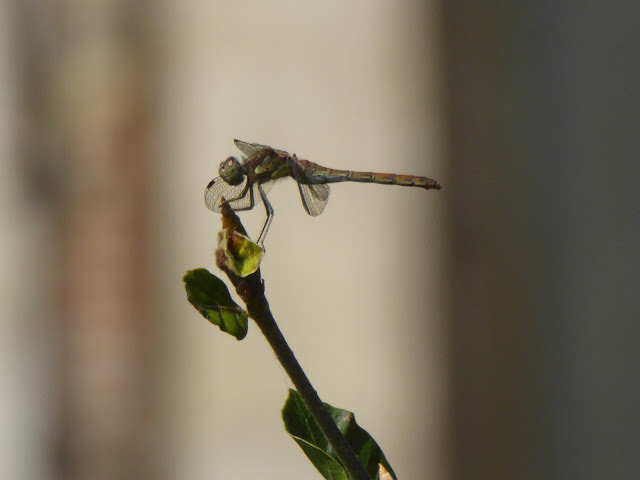 And here is the wall in question, a beautiful flint wall, with nooks and crannies for insects. Last time we found what we believe is a Red Underwing moth resting on it. 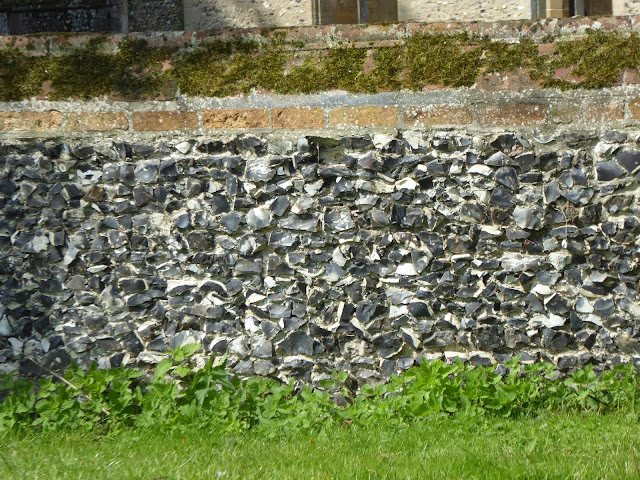 With an array of pumpkins in the vegetable garden, it was hard not to think that the summer is ebbing away... 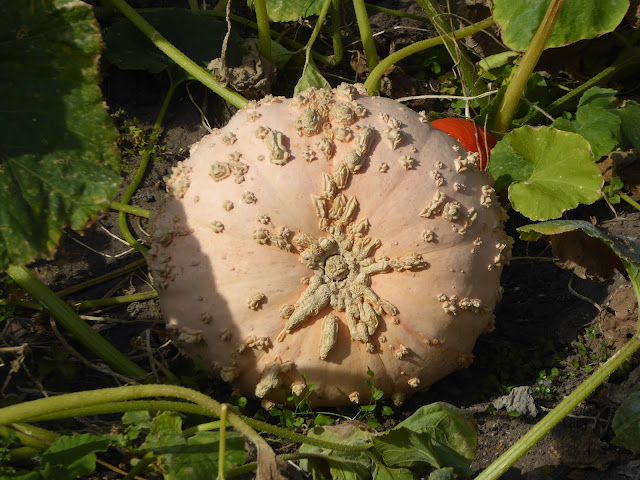 Oxburgh Hall is a beautiful place to visit, with its moat, gardens and exquisite Oxburgh (needlework) hangings (do click the link and take a look at this excellent post from Agnes Ashe). I wasn't able to go inside the hall on this occasion, but I usually make a beeline for the hangings. These were undertaken by Mary Queen of Scots, Bess of Hardwick and a few ladies-in-waiting: I particularly like the 'frogge' and the dolphin. 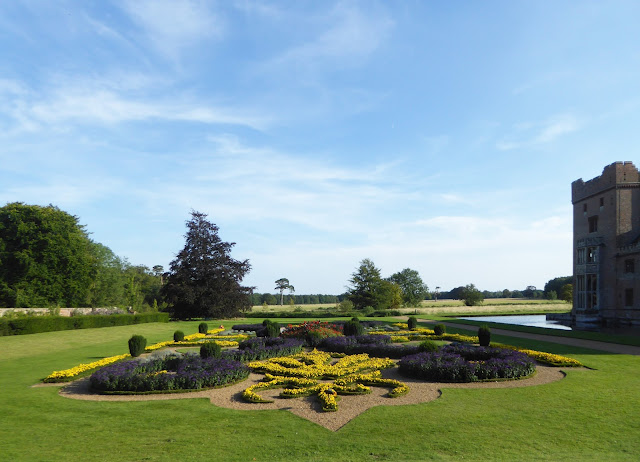 It had been a busy Bank Holiday afternoon, but this was the tranquil scene we left behind at 5pm. 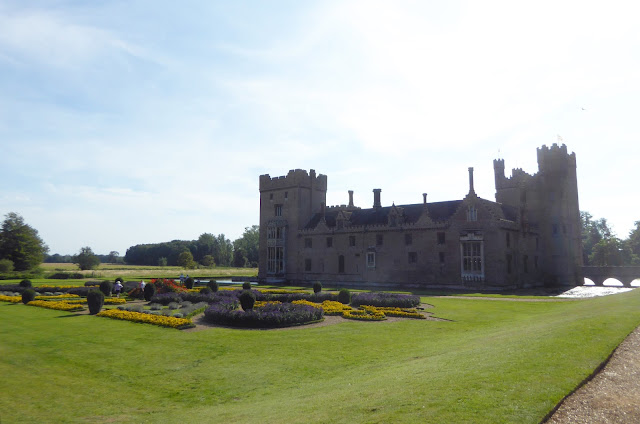 P.S. Inspired by the butterfly books I have been reading (mentioned here in a previous post), I have decided to look through my photos to see how many UK species I have photographed since I began taking digital images. I'm guessing there will be about twelve species, but it will be interesting to find out. It will take some time to scroll through my photo library, particularly since I have not been as efficient at tagging as I should have been!
Posted by Caroline Gill at 15:20

Lovely garden. The colors are so vivid. I recently had a post about the canna lilies we have growing here are perennials. Those red ones are beauties!

What a stunning garden and I loved those wall hangings thanks for the link. Great photos - hope you manage to make a list of butterflies you have taken photos of. I once went through many folders and put ones I had taken in a separate butterfly file but typically have never kept it up to date!

What a wonderful place, keep saying we should visit more houses and gardens.. so nice to see the butterflies too. I would have loved walking round. Beautiful photos..
Amanda xx

Thanks for getting in touch, I wonder if you have tried again? not sure why you can't get on to the Quiet Walker blog, did try to message you through the email you sent but might have copped it wrong as it's not working ! Have another go and see how you get on, let me know.
Amanda xx

Lovely grounds and gardens, I enjoyed seeing all of your photographs.

Amanda, thank you for your kind comments - and yes, I have tried again on more than one occasion to gain access to your blog. I can see there are new posts, but as yet I have not been able to read them. I will keep you posted. I'm guessing it may be to do with a link...