I have decided to post a number of my butterfly photographs, taken mainly during the last decade. My challenge to myself was to see how many I could find in my photo library, and in particular, how many species I could represent.

I shall begin with Swallowtails or Papilionidae.

Sadly I have not seen an adult Swallowtail in the UK. I have seen a few larvae at Hickling Broad in Norfolk (I hope I may do a post on caterpillars at a later stage). My Swallowtail photograph was taken in the western Peloponnese in Greece in 2010. I suspect the butterfly in the photo is not quite the same as our UK Swallowtails, so I will not count it as my first UK species. But here it is...

I find Skippers can be difficult to identify: please let me know in the comments if you notice an error!

Whites and Yellows, known as Pieridae...

I'm sure I do have photos somewhere, but all I can found for now are the eggs on my nasturtiums...

I believe this is the only Fritillary I have seen to date.

I have yet to see a Duke of Burgundy, so I have no photo for Metalmarks, known as Riodinidae

Moving on, we come to Lycaenidae, with Coppers, Hairstreaks and Blues.

The only one I have ever seen...

I suspect it is unlikely that I will add any more new species to this 2007 - 2017 list as autumn is approaching. However, I am pleasantly surprised at my count to date. All the photographs in this post were taken (by me) in the last ten years. We moved from Wales to Suffolk six years ago, and at that time I began to harbour a desire, as yet unfulfilled, to see a Swallowtail in the wild in the UK. Since our move, it would be true to say that I have kept an eye out for butterflies, though often on a casual basis. I feel sure I have a photograph of an adult Large White, but so far it eludes me. I will add it in if I find it or see one of these butterflies on the wing.

I am a butterfly-lover but very much a novice when it comes to identification and many other aspects of the butterfly world. If you see a mistake in this post, it would be much appreciated if you would drop a line in the Comments below. My next paragraph has been pasted from a previous post, but in case you missed it...

I have been paying particular attention to butterflies this year as a result of reading two fascinating books...
There is a good list of British butterflies here (which includes a few migrants).

The only other butterflies in my personal photo library are the two you see below, photographed in the Peloponnese along with the Swallowtail at the top of my post.

I *believe* this next butterfly is a Plain Tiger or African Monarch (Danaus chrysippus). There is a lovely one here in among the photos of lizards.

The other butterfly seen in Greece in the Methoni area of the Peloponnese appears below. I believe it may be a Grizzled Skipper (Pyrgus, but I'm not sure which one). 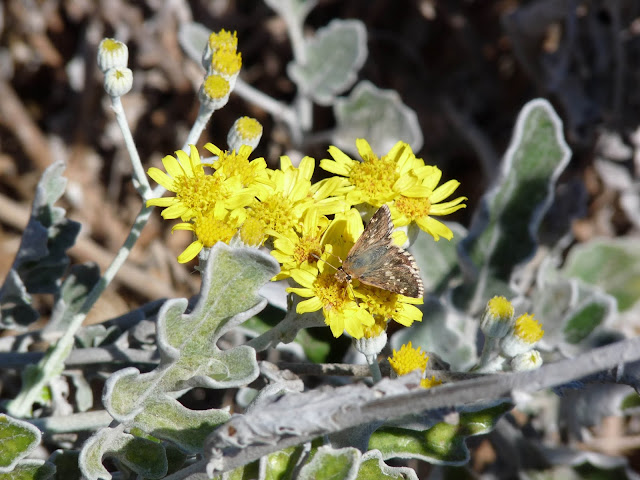 I hope at some point to post a list of the butterfly larvae (and moths, or perhaps initially the day-flying ones) I have photographed in the UK between 2007 and 2017. But to end with, here is a see-at-a-glance list of the butterflies mentioned in this post.

Looking at your photos is like a long stroll through summer.

Lovely selection of butterflies, Caroline! I would love to see aswallowtail or purploe Emperor! I've not seen a small copper this year. In fact very few butterflies round Edinburgh this year, though there were loads in Dumfries and Galloway when we visited recently (and we saw our first Scotch Arguses!).

A wonderful post with great photos and so interesting to read about the butterflies you have seen. Yes, I would love to see a Swallowtail too - only matched by my desire to see a Purple Emperor!! PE occur locally but one day I will get to Norfolk at the right time of year to attempt to see Swallowtail. Not seen a Clouded Yellow either or a Green Hairstreak!

Loved both those books you mention reading - great nature writing :)

Thanks for such a super post and so pleased you managed to sort out your photos.

Wow what a lot of Butterflies, so lovely to see some really good photos...
Amanda xx

Thank you to everyone - and, sadly, Amanda, I have still not managed to gain access to your blog, due, I suspect to a link... Will keep trying and keep you posted!