We had been waiting for some time for the 'right kind of day' on which to revisit the Thetford area. Bank Holiday Monday proved just such a day, with short sunny intervals, even shorter showers and a good deal of fair, if grey, weather.

Our first stop was the site of the Priory, founded 1103 or 4, and belonging to the Cluniac order of monks. The remains are in the care of English Heritage. We made our way to the magnificent Gate House, which dates from the 14th century, and were met by the three avian residents you can see in the photo above. I have been trying to ascertain whether the 'white pigeons' are simply that - white pigeons - or whether, perhaps, they are fantails. According to this thread on the RSPB site, they are descendants of the Rock Dove. Feral pigeons are descendants of what has long been known as the Rock Dove. Does this fact make these white pigeons 'feral' doves? I am not sure. But wait, there is an issue with the name 'Rock Dove': do take a look here in the pigeon and dove section of the IOC World Bird List site. 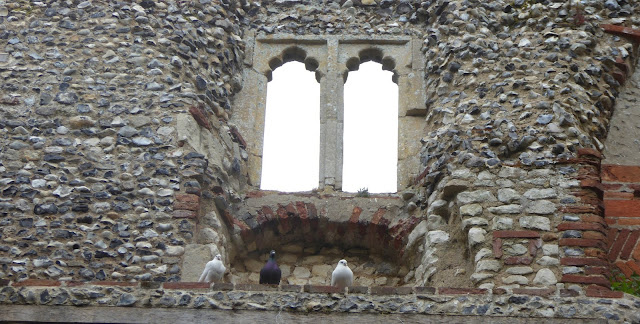 Above: the pigeons in situ. 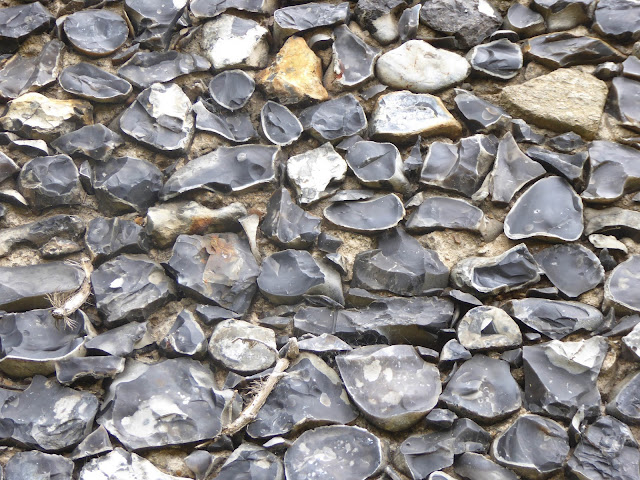 A close-up of the flint, and you can see where strands of ivy have been removed (or in this case, left). Thetford is not far from Grimes Graves, and is a good location for flint. 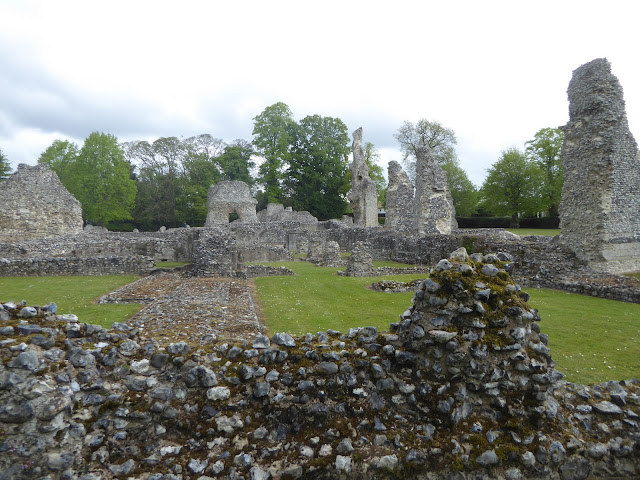 You can see that we were under rather a dark cloud at this point, but this photo gives a good impression of the extensive remains of the Priory. 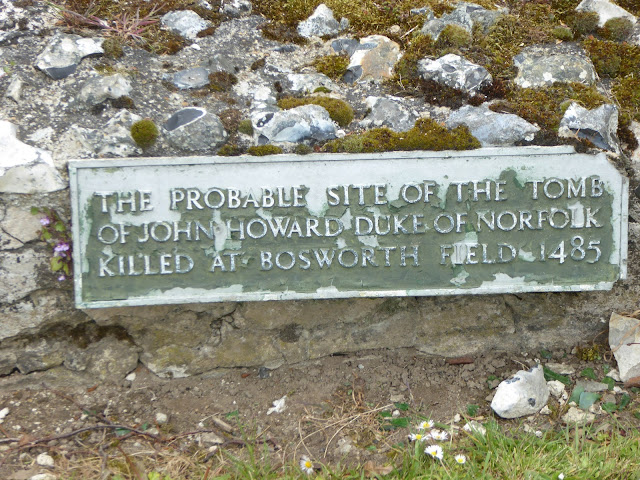 You can read more about the Howard family here. 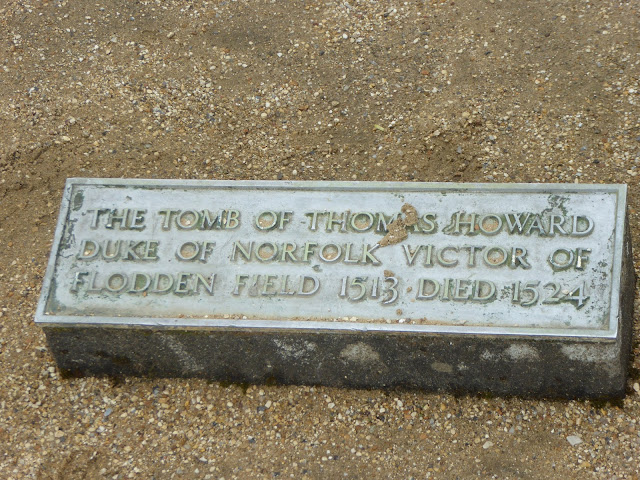 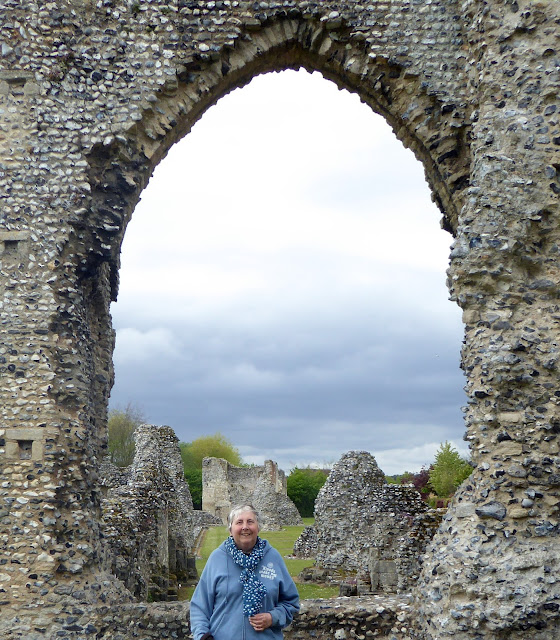 The photo above shows the Priory end of the site and the one below is from the spacious prior's lodging. 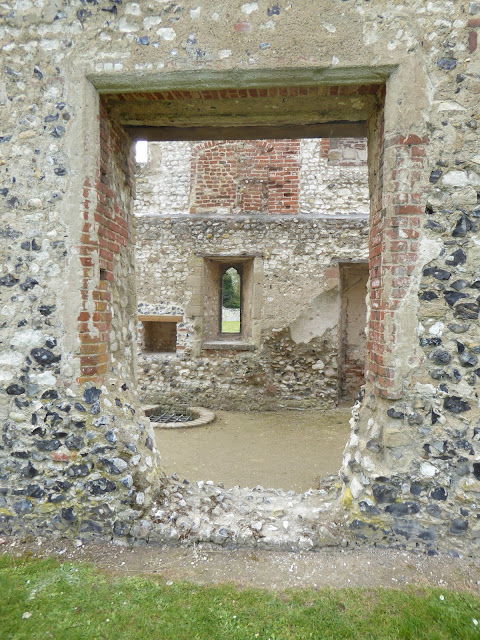 I went inside the walls of the prior's residence and noticed a corner of wildflowers growing out of the wall. I don't know whether this suggests that this corner is a damp one or whether, perhaps, it is a favourite haunt of wild birds who deposit seeds. 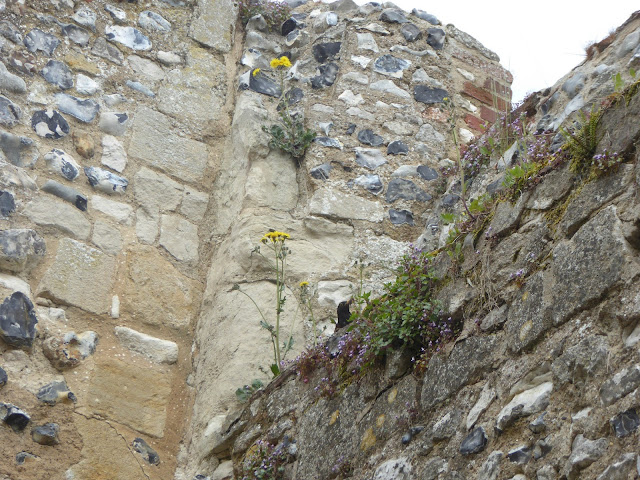 In any case, I was soon aware that there were two bright Blackbird eyes... 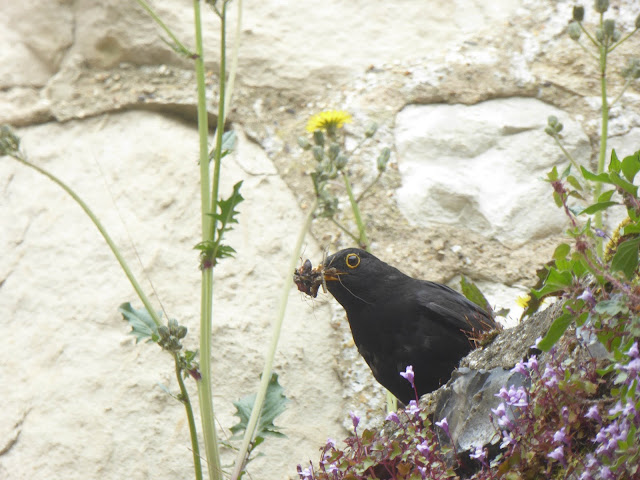 ... staring down at me. The bird's bill was stuffed full of insects. I left him to his prize catch, not knowing whether male Blackbirds feed the female while she is nesting, though I never saw or heard a hint of another bird in this area. [After note: I have now been able to look up the habits of breeding Blackbirds, and it appears that while only the female sits on the nest, her mate will assist with food finding. Of course, I have no idea whether this particular bird was feeding himself or a family...].

By this time it was 1 o'clock, so we moved on to the next site - which was half a mile away, if that. The ruined Church of the Holy Sepulchre in Thetford is currently undergoing some restoration, as you can see from the photo below. The nave dates from the 12th century, and at some point after the nearby priory (see above) was dissolved in 1536, this particular church fell into use as a barn. I have only found three other UK churches with this dedication or foundation, including the Round Church in Cambridge. 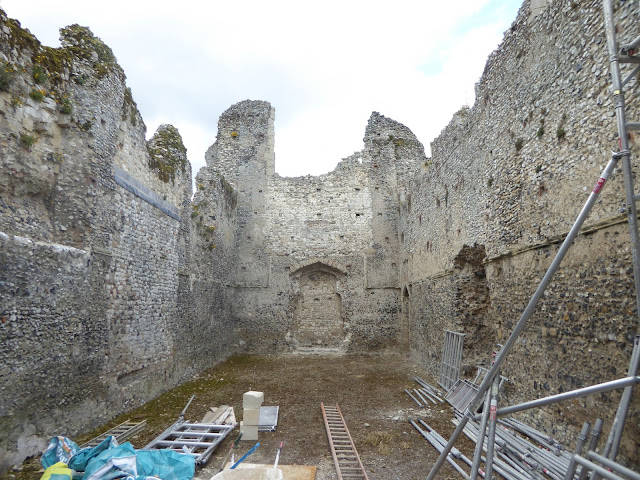 According to the English heritage board, the rounded structure below is an added 19th century grotto, built as part of an ornamental garden feature. How unusual. You can read more about the church here on the Historic England site. 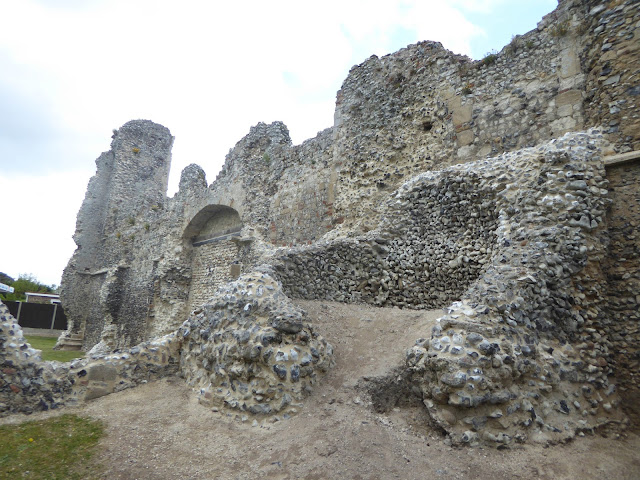 I looked about on the ground and noticed an empty snail shell. There was only one, so the adjacent flints may not have been in use as a regular anvil for a Song Thrush, but they would have served a useful purpose on this occasion at any rate. 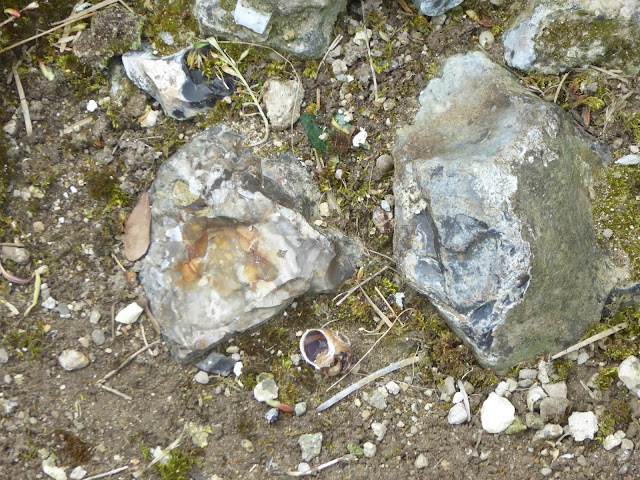 We were being watched from above, and it is possible that this bird had dropped the snail from a height. Song thrushes bang away at their 'anvils' on the ground whereas Carrion Crows and some other corvids prefer to drop a mollusc shell from a height. 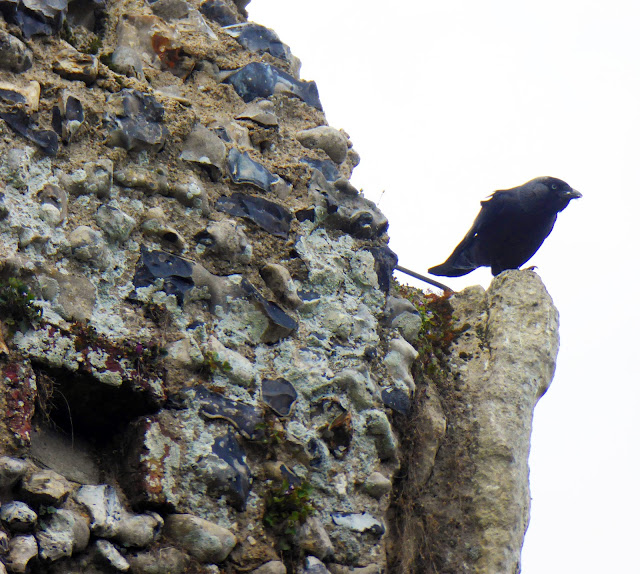 It was time for a picnic lunch so we drove a few miles out of town on to the heath in the heart of the Brecks. The soil is sandy here and ideal for the families that were using the bike trails through the adjoining forest. 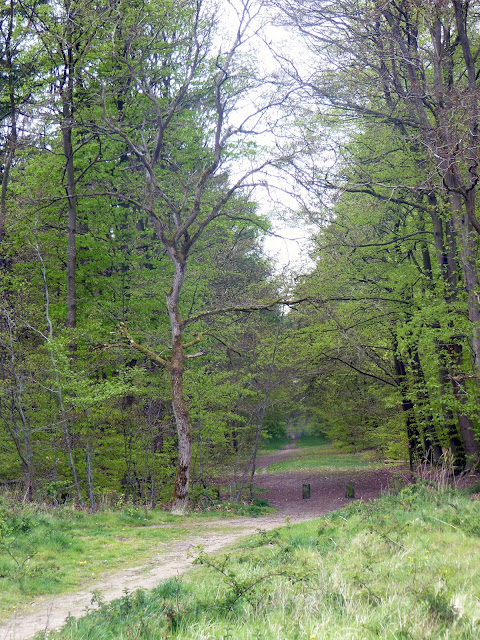 David and I found several caches of overwintering ladybirds, sadly all Harlequins. I shall add these to the UK Ladybird survey. But to end this section on a happier note, I am pleased to report that both my recent North Norfolk ladybird IDs have been assessed on iRecord and confirmed. One of the species was a (small) Kidney-spot and the other a (large) Eyed Ladybird - both UK species.

We moved on to Knettishall Heath after our picnic, a wildife area in the care of the Suffolk Wldlife Trust. This will be the focus of my next post, and it will include - you guessed - the sighting of another UK ladybird species. 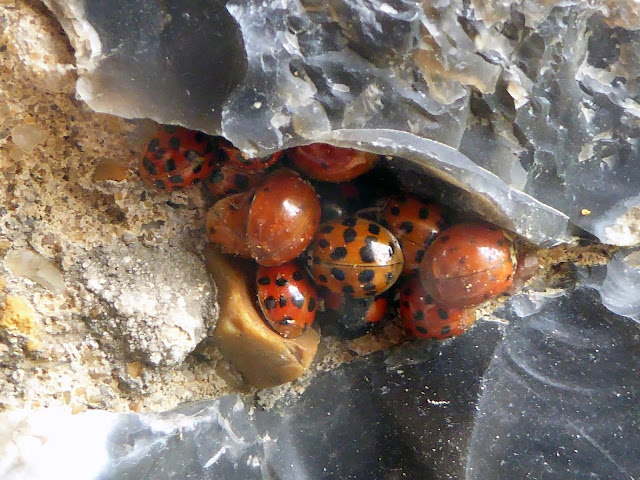 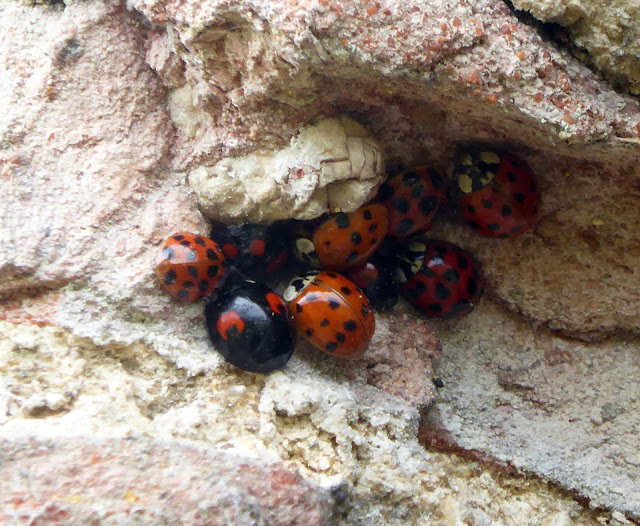 That is such a wonderful place to visit. Your photos are so great and interesting to see.

A really interesting post Caroline. Would love to visit both those places - such history :) Glad you got id confirmed for your North Norfolk ladybirds :) We get far too many Harlequins here - both inside the house and in the garden :( I am always over the moon if I find a native ladybird!

The ruins look fascinating and I particularly like the photo of the blackbird! In our part of Edinburgh, a lot of the feral pigeons have quite a lot of white in their plumage due to the influence of the fan tail doves in the local city farm

Thank you, Juliet, for this interesting observation. The pigeons remained static as we explored the Gate House - I would have liked to have seen if they had fan tails!