Welcome to my Tree Following post for August and early September.

These tree posts form part of a wider project run by Lucy Corrander from the Loose and Leafy blog. I am based in Suffolk, UK, where I am following an Acer negundo (aka a Box-leaf Maple). I am also continuing to keep an eye on my Silver Birch, B. pendula.

You will find the other Tree Follower links on the Loose and Leafy blog ... so do take the chance to have a look around!

August has been a strange month for us, with day after day of grey sky and a fair amount of rain. I think there must have been sunny interludes as I can remember trying to keep the wasps at bay, but the evenings have seemed dark and autumnal.

Strangely with the seasonal changes going on all around, my two trees have not changed as much as I might have expected.

There were toadstools along what seem to be the root lines of my Silver Birch: there are still toadstools.

The Acer negundo was displaying its seed keys. These are still green and they continue to hang in the same manner. Come to think of it, the dispersal of Silver Birch seeds appears to have slowed. This may or may not actually be the case: it may simply be that the lack of light has stopped me from noticing the dispersal.


What of the wildlife? I watched a very small fly alight on the Acer negundo, but failed to see it once it had landed. Otherwise this tree has been something of a barren area in terms of insects and small creatures. I would love to know why.

The Silver Birch, on the other hand, has continued to attract a large family of Long-tailed tits. They chitter-chatter away and are a delight to watch. There are plenty of Bluetits, too, of all ages. The Great tits head up the pecking order when the Magpies are elsewhere. I have seen the Grey Squirrel on a couple of occasions, and there are two Wood Pigeons who like to vie for the best perch on the fence next to the trunk. Sadly we have not seen the hedgehog again.

Butterflies have been few and far between. I suspect the Whites were largely attracted by my nasturtiums. There have only been a couple of Red Admirals, and they have made the white Buddleia their destination of choice (a second was spotted some days after my Buddleia post here).

There have been Lacewings on the window at night and one or two moths. Whether the Silver Birch has anything to do with their presence is hard to say. 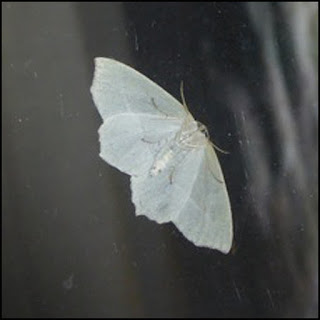 My least favourite visitors this summer have been the Hornets. One flew in to the house through an open upstairs window and was incredibly difficult to get out again! No stings reported, I am relieved to add.

I expect we will notice more radical changes next month when I will post my updated list of species seen around my two trees. I am not an autumn person, though I have to confess that I do enjoy the rich colours that appear before the frosts set in.

A lovely post - the leaves on our Silver Birches are still green - lots of berries appearing on various trees and shrubs round the garden.

Interesting, after what we said previously, that the Red Admirals were on the White Buddleia! Ours has "gone over" now but the few remaining flowers on the purple varieties have finally attracted Red Admirals, Small Tortoiseshell and Comma. Still not seen many Peacocks this year though!

Long tailed tits are always a delight to see!

Like you I tend to enjoy the colours of autumn rather than the actual season itself Caroline. I hope the hedgehog make a return visit. I rarely see the one that visits us - twice a year if I'm lucky.

Hornets are less aggressive than wasps, I believe? Although it wasn't a very aggressive wasp that got under my duvet and stung my foot yesterday...

Birches and maples both have such interesting leaves - wonderful shapes!
Great to have birds there, too!
Happy Tree Following!
Lea

Hello Caroline, Pretty tree! Sounds like a nice outing with some great bird sightings. Have a happy new week!

The Field of Gold said...

I do like that alder. I wonder how well it will do in our desert like environment.

Don't mention wasps! There seem to have been many this summer - and I've notice they like following some people better than others. Fortunately they don't seem to like me so I can watch them moderately safely. Lace wings . . . I've not seen them on my windows yet. Odd.