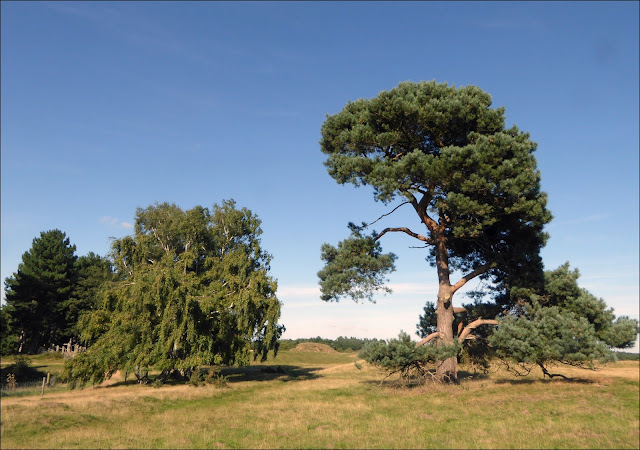 After recent days of grey cloud I was keen to make the most this afternoon's lovely weather. NT Sutton Hoo was looking at its best. The mounds are in the background and the Visitors' Centre is beyond. 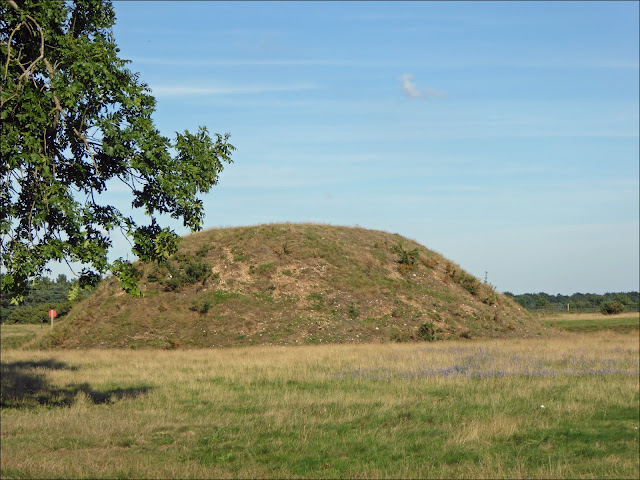 The blue flowers on the right of the mound are Harebells (you can't tell from the photo!). 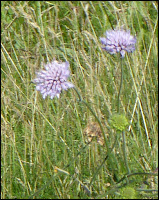 There was also a good sized patch of Scabious, however ... 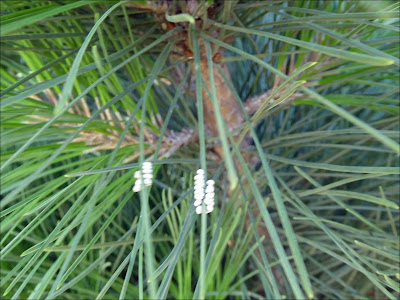 ... what excited me at the time, and even more afterwards when David checked his Twitter feed, were these small white eggs on one of the pine trees. The tree was just inside the central roped-off mound area, making it difficult to get close enough for my camera to allow me to take a good macro shot. But at least I have a record of what are (it seems) eggs of the Pine Hawk-moth, Sphinx pinastri.

I am giving this identification because a glance at Twitter revealed that Molly Carter - who tweets as ‏@CuratorMolly - had seen not only the eggs but also a magnificent caterpillar here at Sutton Hoo only a few days ago. You can take a look on her Twitter account by clicking here. You might also like to see this brilliant model!

Don't forget that it is Moth Night (which goes on until 12 September 2015). Next year's theme will be Hawk-moths.


When I was up at Sutton Hoo last time, the local Kestrels were making their presence felt. I was delighted to find that the pair were active again today.

Autumn is beginning to have the upper hand, and we saw a lot of fungi around the site.


As we turned to leave, we saw a Hornet (too quick for us to catch on camera, my fifth Hornet of the season) in a gorse bush along with this spider, who had no intention of going anywhere. 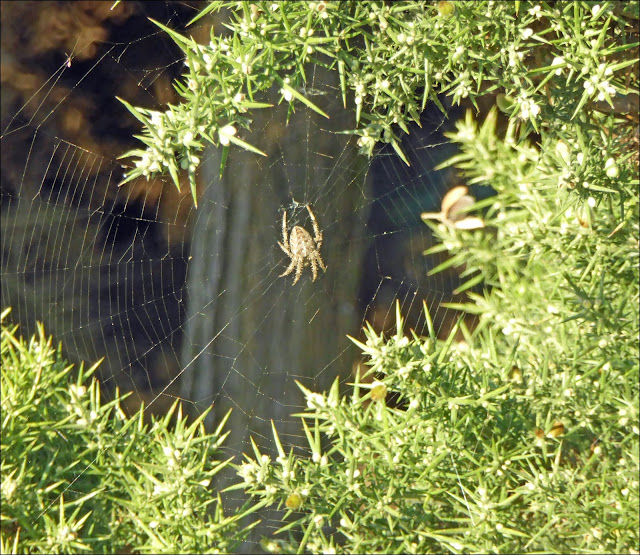 Lovely photos Caroline. How interesting to find the moth eggs, I really must look more carefully for moth/butterfly eggs and caterpillars!

Lovely photos and well done on finding the Pine Hawk-moth eggs. Wonderful to see the haze of harebells in the distance on one of the photos. We have a few flowering near here on a bank near a common - until the Council mowing machines decided to cut the grass :(