Odonata: Norfolk Hawker (a first sighting for me) 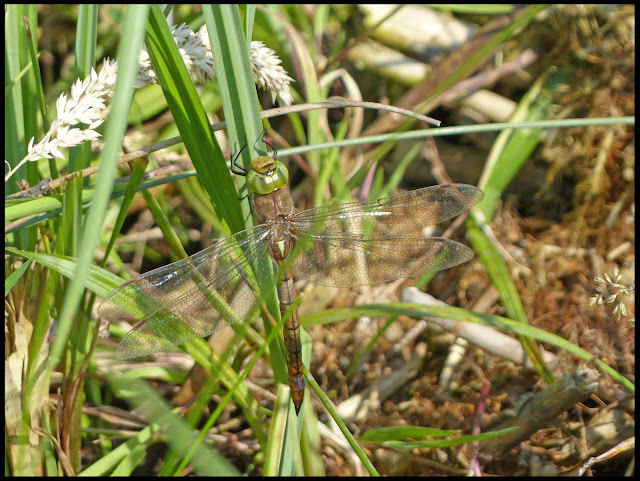 I am planning to post a few more Scottish photos, but we saw this female dragonfly at the weekend at Carlton Marshes near Lowestoft, and I wanted to post the photos while I remembered!

It was very well camouflaged, but we knew that there had been recent Norfolk Hawker (Aesha isosceles) sightings so we were keeping a sharp eye open.

You can imagine our delight when we realised that our watchfulness had been rewarded. The Norfolk Hawker has been described by Paul Green (The Little Guide to Dragonflies and Damselflies of Minsmere Nature Reserve) as an 'extremely rare insect confined to just a few sites in Norfolk and Suffolk', although I gather the dragonfly is also known on the continent. It is listed on the Red Data List and a licence is required if handling is to take place. This dragonfly is a UK-BAP Priority Species.

It is, as you can see, a large brown creature, with arresting green eyes. The yellow triangle on segment two (S2) is also a distinguishing feature. You can make out the amber wing-spots. We read in Britain's Dragonflies by Dave Smallshire and Andy Swash that 'any brown hawker with clear wings seen in East Anglia in early summer is sure to be this species'. 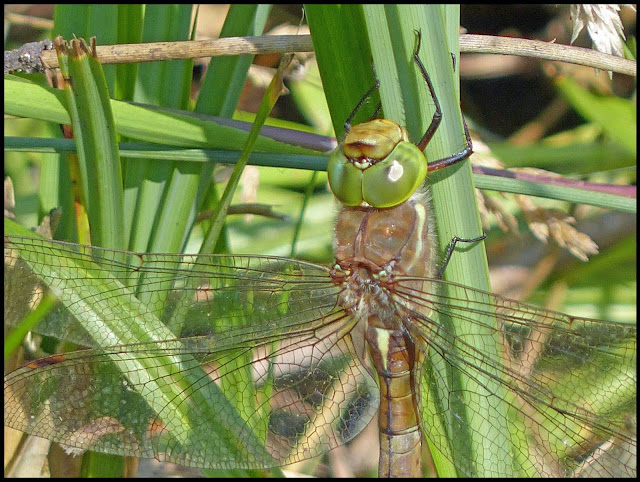 Gorgeous captures of the Norfolk Hawker. Congrats on your sighting!

What a find - fantastic!