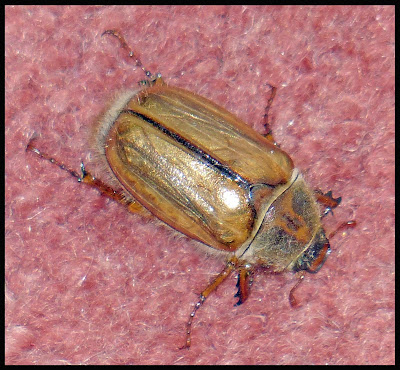 Like many of you, we have been enjoying the *warm* weather!

Soaring temperatures seem to have brought out a flurry of Maybugs or Cockchafers in our garden. They have been fascinating to watch. Two have flown into the house and have been coaxed outside again.

Unlike the Cockroach, the Cockchafer is harmless and is not considered a public health pest, though the grubs are not popular with gardeners! Male Cockchafers have seven 'leaves' on their antennae while females have six.

I gather the insect is often known as the Spang Beetle in Norfolk, and was in decline as a species until the the use of pesticides began to be checked in the 1980s.

I haven't seen Maybugs since we moved to Devon. I confess to finding them a bit disturbing when the flew AT me in large numbers during my last encounter but lovely to see one close up and still.

Interesting insect! I don't think I've ever seen one!