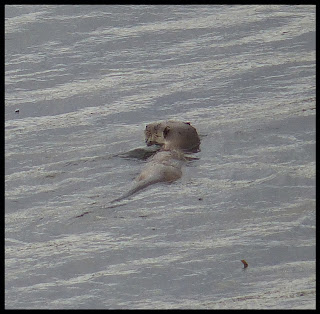 I love to watch otters in the wild. They are very difficult creatures to spot, so we felt particularly pleased to have three sightings during our recent fortnight in Scotland. Two clues help me in my initial spotting, the first being that telltale V in the water as an otter swims, and the second, well, you have probably guessed, that 'ring of bright water' that was borrowed as a phrase by Gavin Maxwell from 'The Marriage of Psyche', the poem by Kathleen Raine. 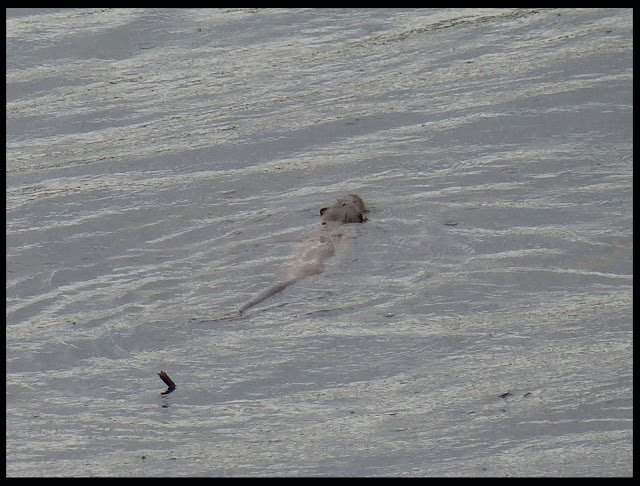 We often use the car as a hide. It means that the otter is less likely to notice a human scent or to hear a strange noise. It also means that we can keep dry, though we had to keep switching on the windscreen wipers during the time we watched the otter above in the Assynt area.


Two of my three otter sightings were of otters in the water. The third sighting, on Skye, began with an otter swimming near the shore, in and out of the kelp. To our great excitement, the creature climbed out of the water on to a long low rock, allowing us to see its whole form before it dived back and disappeared into its mysterious watery world.

We have re-visited old haunts on our recent holidays. We have also enjoyed new places along the way, but we have discovered that tried and tested destinations often yield good sightings. It takes patience, of course, and there is always the unpredictable element of timing: you just have to be in the right place at the right time!

Really lovely to see Caroline. I saw some on Mull once but that was a VERY long time ago!

Lucky sightings there! Our best ever sightings have been in Lochinver harbour and we've also seen otters off the coast near Oban and in the Water of leith near one of Edinburgh's sports stadiums!

Great sighting! Are they river otters? It is wonderful you were able to get photos too!

Thank you all for your kind comments. In answer to Eileen's question, the only otter species in the UK is the Eurasian otter (Lutra lutra), one of a number of species found worldwide. This species frequents the sea and the sea lochs as well as rivers and fresh water courses.