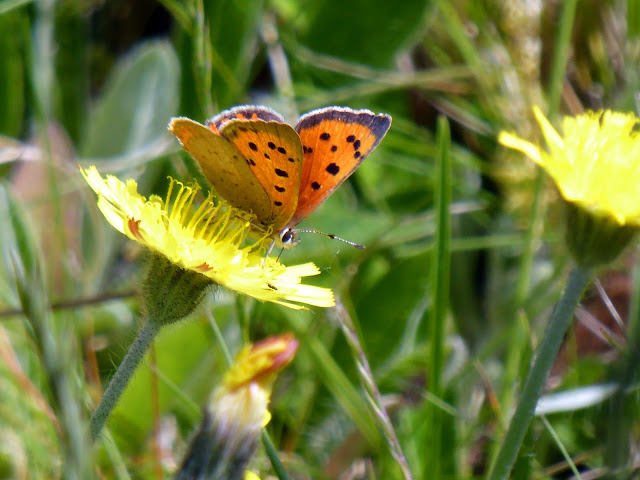 I have three garden sightings to report so far today (and a fourth, though I was not the one to see it).

[1] My first Small Copper of the year, which you see above.

[2] A bee flying in and out of one of our insect houses, despite the ant invasion. I failed to photograph the bee, though you can see the ants making their presence felt in the photo below, taken a few days ago. I hope the bee will prove to be a Leaf-cutter, which is what we had last year.

[3] The blackbirds were making loud (?alarm) calls last night at dusk. We failed to see evidence of a magpie, jay or cat ... but this morning Star the female was perching in front of a rotund and fluffy semi-fledgling. No wonder Star has been such an active hunter-gatherer recently.

I wonder what you have been doing or finding for Day 2 of #30DaysWild ...

Lovely Small Copper, I’ve yet to spot one this year. Blackbirds very vociferous in the garden today along with many sparrows and their fledglings. B x

The copper is beautiful.

still waiting to see a small copper but did see my first Small heath Butterfly this week, my bee hotels have been very busy this week in the warm sunshine.

That Small Copper is beautiful.