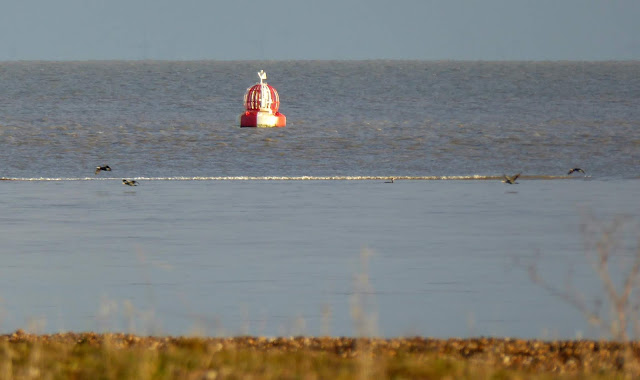 I always enjoy a visit to Shingle Street, which can feel a very exposed part of the coast. Today we encountered surprisingly blue skies and calm sea conditions. There was very little wind despite the cool temperature. The rivers Ore and Alde (from which Aldeburgh gets its names) reach the sea here. There are currents and sandbanks. I always like to look out for this buoy, and on windy days you can hear its bell ringing. There was no sign of the green buoy this afternoon. 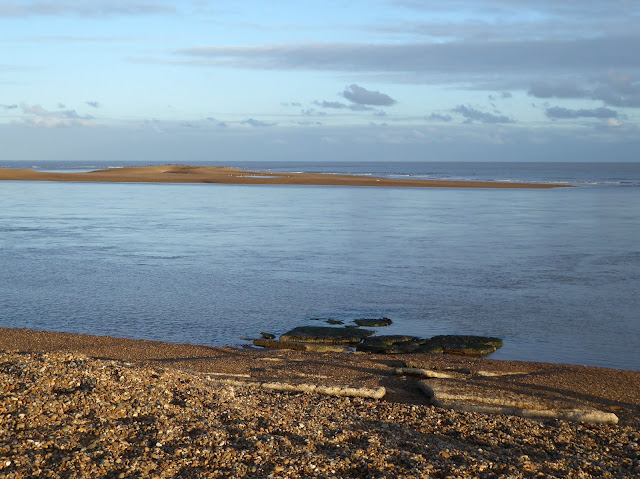 We have often watched Common Seals, but there were none in evidence today. 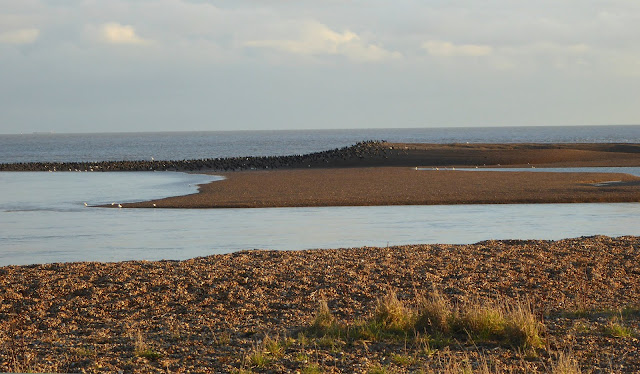 There were, however, good numbers of Cormorant. 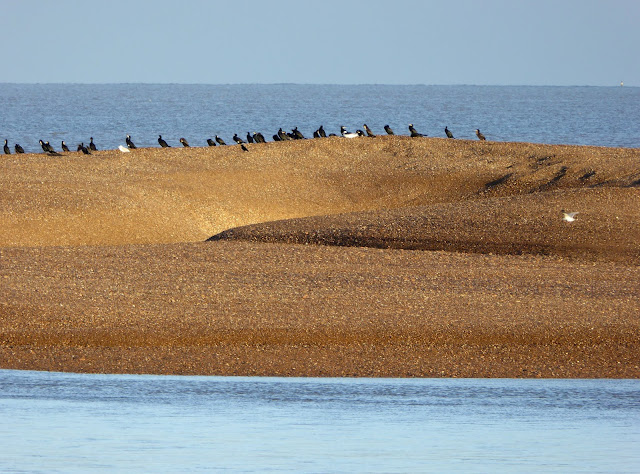 The light changes constantly and at times the view can seem quite surreal. 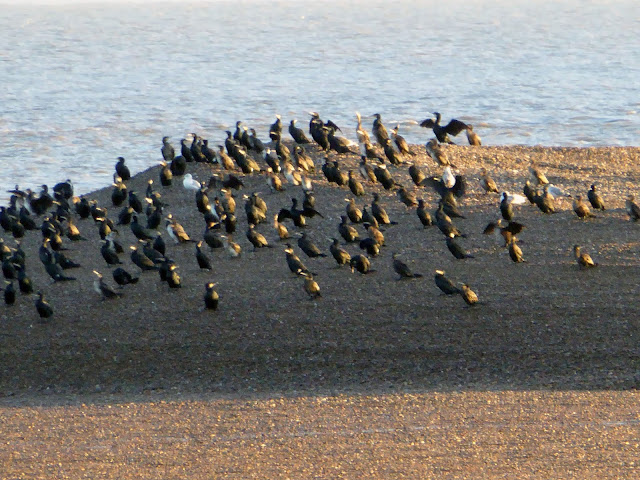 Birds are continually on the move. 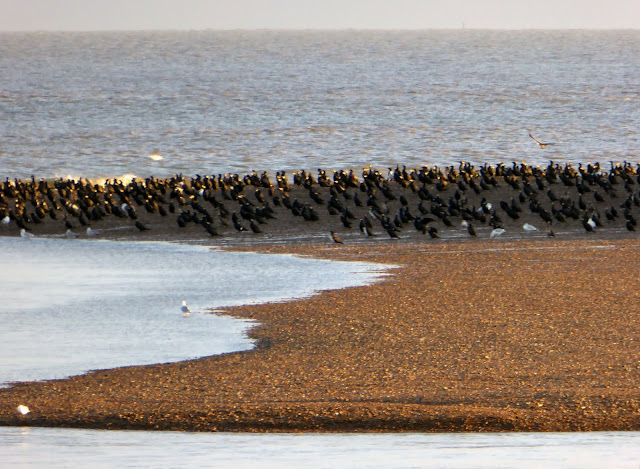 I love the progression in the photo below from scrubby grass to watercourse to shingle to (sea which is hidden from view, then on to) sand, to sea and finally to a wide expanse of East Anglian sky. 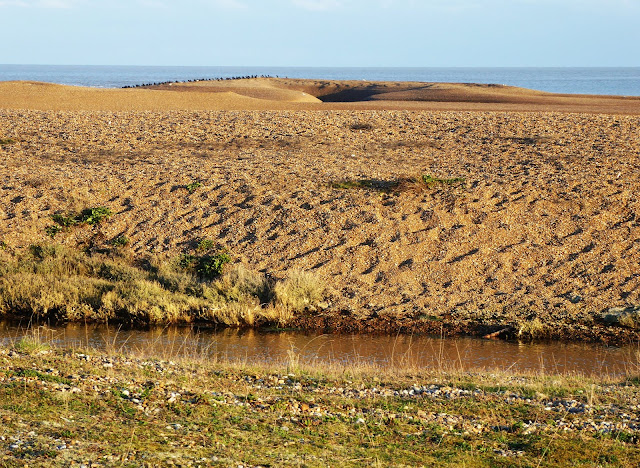 Shadows are very evocative in the low light at this time of year. 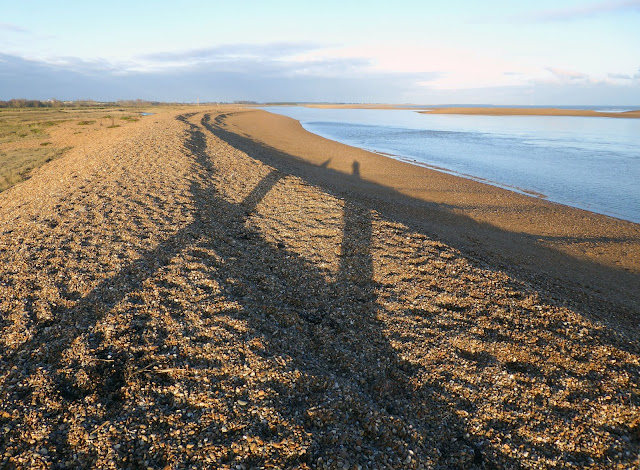 Nobody knows how much longer the Orford Ness lighthouse will withstand the battering of tides... 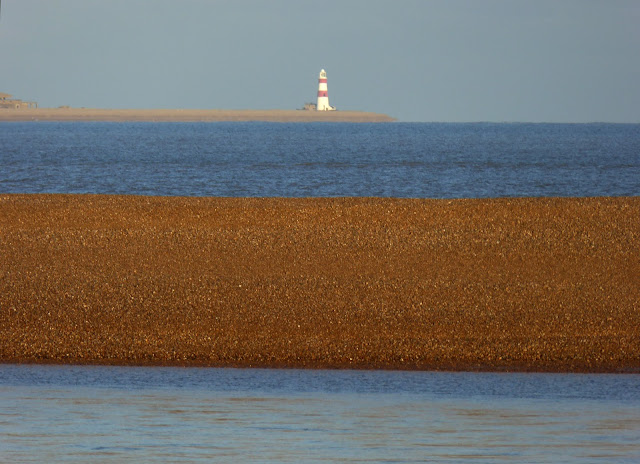 ... but for now it stands as a poignant and cherished beacon, a monument to a former age. 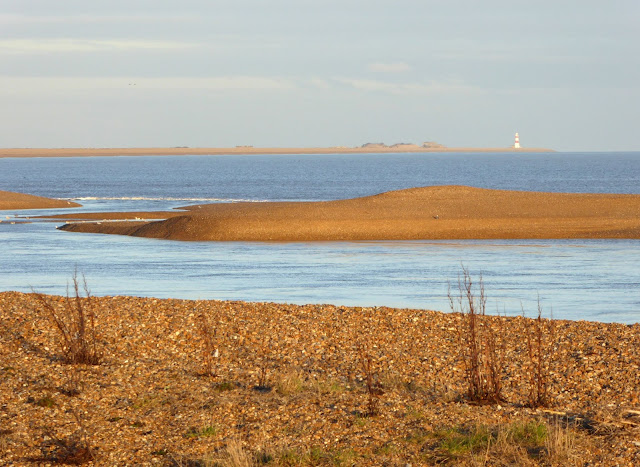 Reeds are an iconic part... 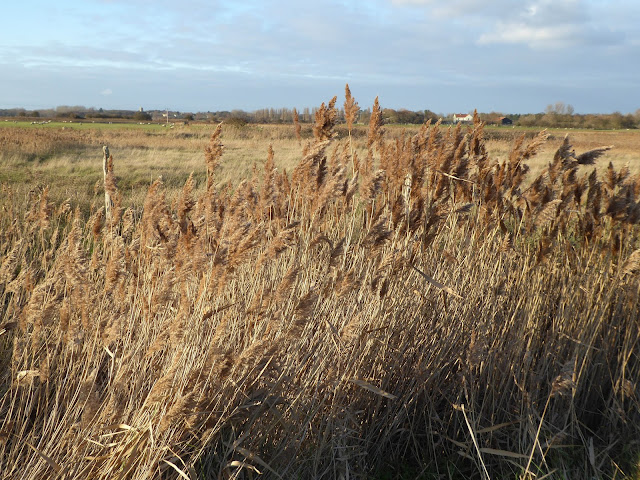 ...of this desolate landscape. 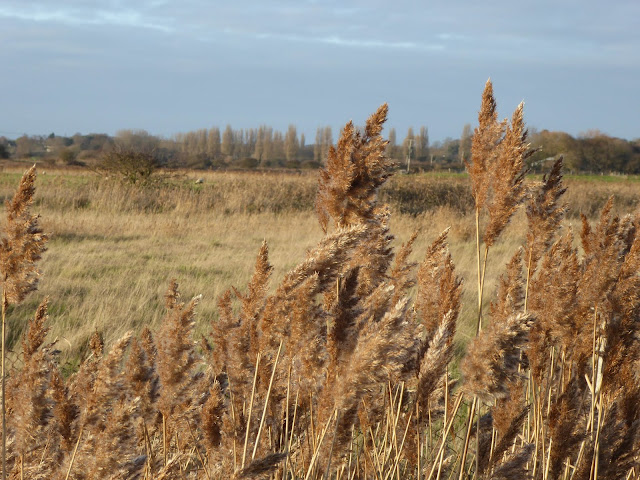 They give way to a low-lying field of sheep and a church tower. 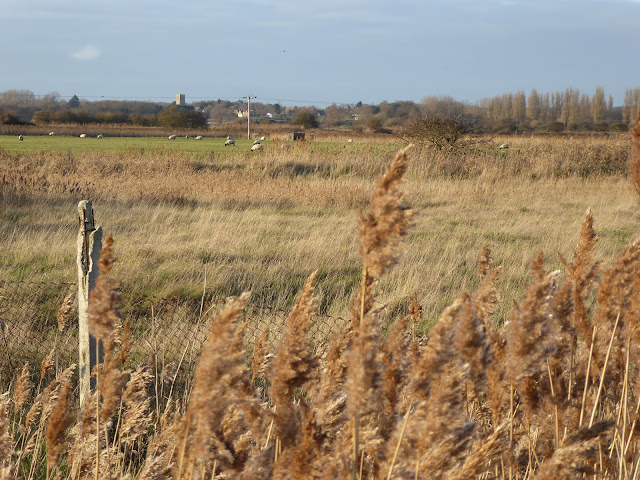 Shingle Street is a terrific spot for wildlife. Pipits can often be seen, along with waders like the Redshank below. 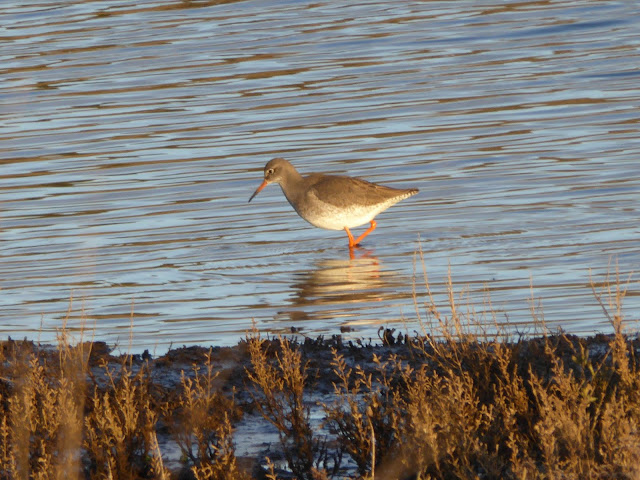 I suspect the lichen (if this is what it is) in the photo below bears testament to the pure air. 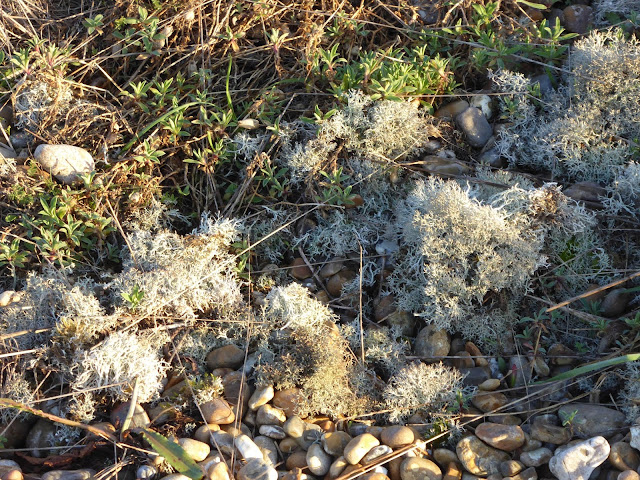 The shell below belonged to a Slipper Limpet. 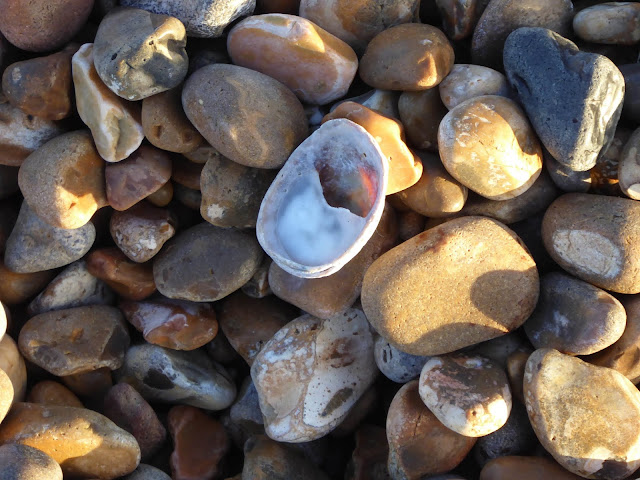 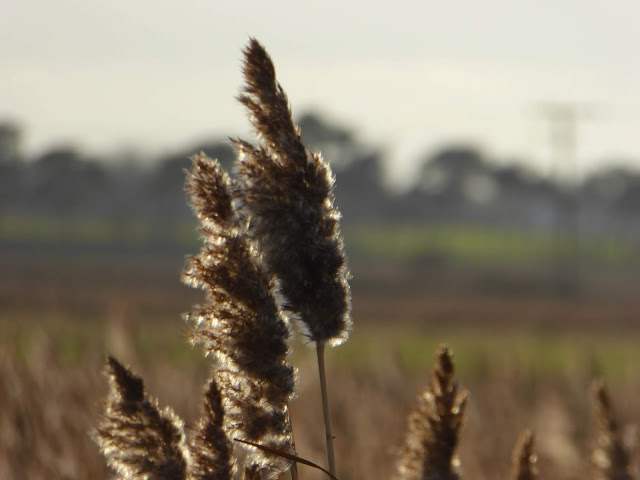 We took a last look at the buoy... 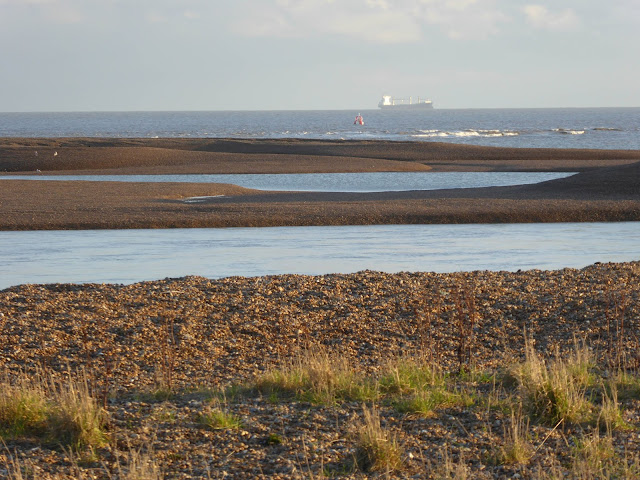 ... and the gulp of Cormorants (there were many more in the sky by this time, probably heading for the marshes at Trimley). 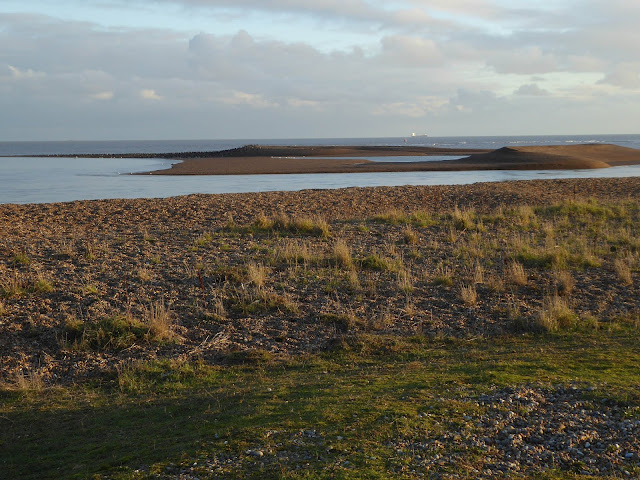 The sparkle of sunlight on reeds was utterly irresistible! 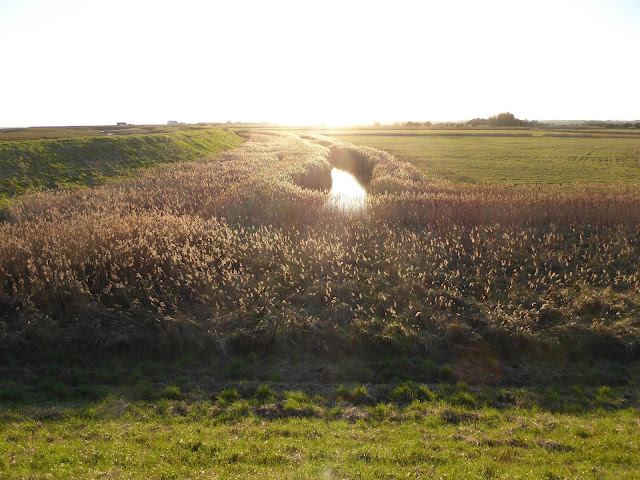 We checked the mudflats in case there was anything unusual lurking in the shallows... 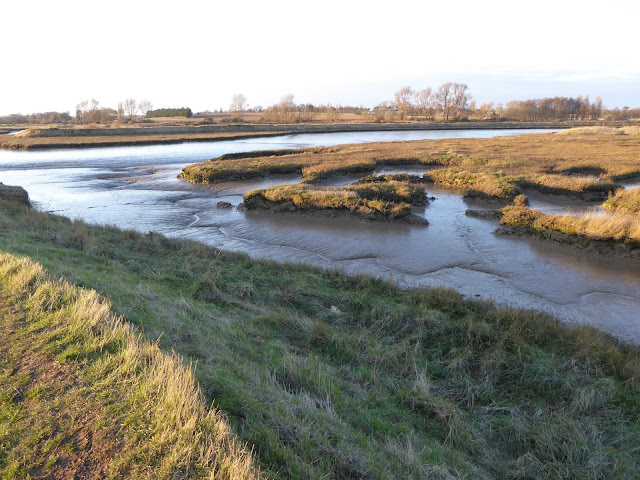 and David walked a bit further along the bank... 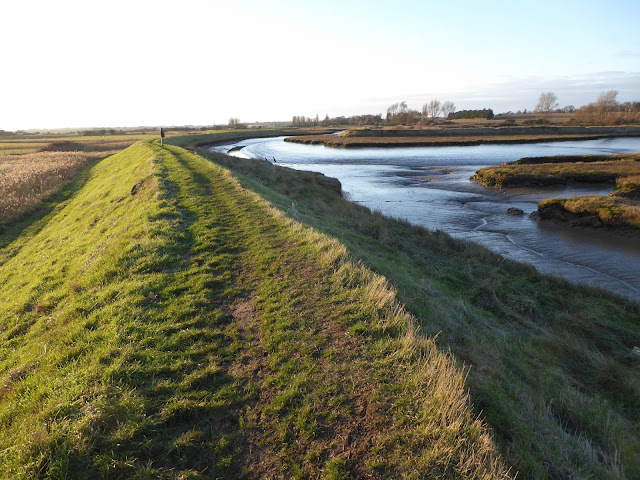 ...before we turned for home with the call of the Redshank ringing in our ears.

Some of you may be acquainted with Blake Morrison's collection, Shingle Street (published by Chatto & Windus). Carol Rumens reviewed it here for The Guardian and Observer online. 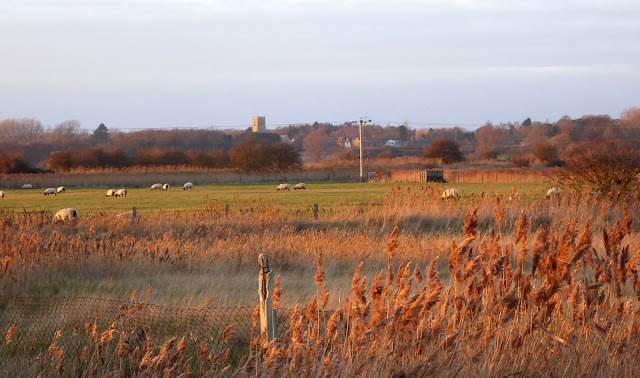 Such fabulous photographs, I enjoyed them all.
The light does fade so quickly at this time of year, but it looks like your weather was very good.

So enjoyed tagging along vicariously on your walk down Shingle Street.

What an eloquent look at the Wild Stretch of Suffolk Coast. The light and shadows, Pipit, the walk itself - what a wonderful way to greet the morning here in Ellicott City, Maryland, so far away. But connected to you.

What a beautiful look at this stretch of coastline - the photos with the light are so wonderful. It looks a great place to go for a walk.
Thanks for the link to the review of the poetry book - it looks good :)