We spent Saturday in North Norfolk last weekend, visiting the Norfolk Birdfair in the glorious grounds of Mannington Hall. Writer and fellow poet, Mark Merritt (who blogs at Polyolbion), was doing a book signing for his new book, A Sky full of Birds, published by Penguin, so I was delighted to be able to ask him to sign my copy. Matt, it was good to meet you and thank you for the signature!

We watched a ringing demonstraion, allowing us to see a family of Long-tailed tits at close range. They all look so slender on our coconut feeders in comparison with all but the slimmest Blue tits, but they really were tiny. The birds had been caught together, and once they had all been ringed, they were going to be released together.

There were lots of stalls to visit in the marquee, promoting all kinds of wildlife-related products and opportunities from birding holidays to greetings cards, out-of-print books (and yes, one on Ted Ellis has been stashed away for Christmas) to organisations like WWT, RSPB and the Broads Authority.

We wandered round the lovely grounds, pausing for tea and delicious cake, before resuming our perambulation. There was a bird-watching walk in progress and we were impressed at the number of species that had been spotted. We spent quite a time trying out binoculars for size, weight and clarity - and enjoyed watching the tadpoles in the rill.

Just as we were leaving, we paused to speak to the staff on the Norfolk Wildlife Trust stall. They asked us if we were planning to attend an evening later in the week with Mark Cocker in the Forum in Norwich. We decided to buy tickets.

I have been a fan of Crow Country ever since I read it some years ago. Part of the attraction was due to the fact that the corvids in the books live in the Yare valley, home of my teenage years. But perhaps over and above the connection with a familiar patch is the fact that Mark Cocker's prose is both precise and compelling.

His talk was part of the Wild in the City 90th anniversary celebrations of the Norfolk Wildlife Trust. He spoke for about an hour, with a wide-ranging Powerpoint presentation of his wildlife images moving gently before our eyes in the background.

Mark was speaking about the commonplace in nature, and how it is important to enrich our wildlife knowledge of a small area - to focus on digging more deeply in our quest for the local, rather than to put all our efforts into scratching the surface of habitats in far-flung places.

He pointed out that we live in a culture in which rarity is prized, perhaps at the expense of more common - but often key - species. When it comes to writing, his advice was to follow our gut instincts, whether this meant describing a rare creature that we had just seen or writing for the 100th time on a favourite bird (in Mark's case, the Blackbird).

Not surprisingly in the light of recent developments (see my blog post from 2015), Mark stressed the importance of names in the natural world. He particularly stressed the importance for those of us who live in the UK of English names in addition to the traditional Greek and Latin ones. 'Without a name', he said, 'you can't begin that journey into neighbourliness.'

We were told about the 3rd Norfolk Festival of Nature, which will take place at Gresham's in June and then in The Forum, Norwich in October (as part of the Norwich Science Festival).


Here's to the Norfolk Wildlife Trust and the next 90 years. 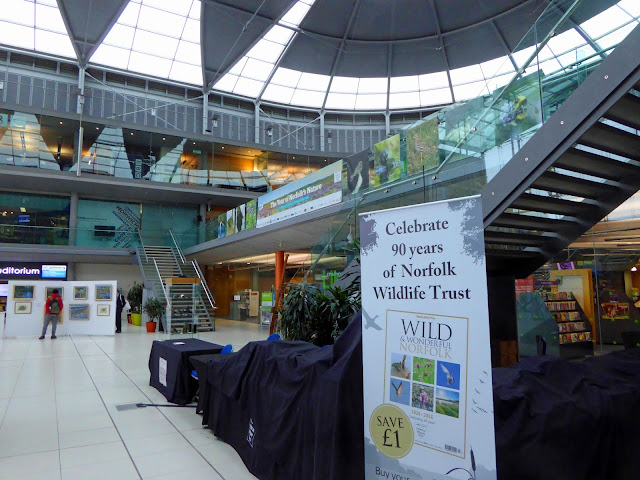 Would have loved to attend the talk by Mark Cocker - am such a fan of his books. It sounds a very interesting evening as does your day out too :) Have a good weekend.

Sorry also meant to say it must have been good to meet Matt Merritt too and get your book signed. I read Birdwatching Magazine which he edits and it is an excellent publication :)

Birdwatching for not very good birdwatchers has been rendered rather tricky by the trees coming into leaf!

We didn't get to the Scottish Birdfair this year (due to being in Shetland!) but one of the highlights from last year was the ringing demonistration!

sounds like you had a great time. would have loved joining you. awesome you got to experience the ringing and have a book signed too. have a great day~