Welcome to my Tree Following post for March and early April 2016.

I am based in Suffolk, UK, where I have been keeping an eye on a Silver birch, B. pendula. I really enjoy following the Silver Birch B. Pendula and have added in a small Cherry sapling for my second tree.

You will find the other Tree Follower links by clicking the Mr Linky link here ... so do take the chance to have a look at the new posts!

The tiny Cherry, Prunus avium Sylvia, had some fine buds on it last month. I am glad to say that these look healthy and are about to burst. This tree began life with us in a pot, but we planted it in the garden last year, and it seems to have weathered the winter.


This is an even numbered month so I will post a current list of species found in the vicinity (on, in, under, around or over) the two trees. 7-spot Ladybirds top the charts numerically, followed by Wood Pigeons. A dominant Blackbird saw off a Jay this afternoon: the action is speeding up! It has been terrific to have regular visits from the male and female Great Spotted Woodpeckers.


I wonder when I will witness a first butterfly around the trees: I have at last seen one Brimstone and two Small Tortoiseshells - but these were on the North Norfolk coast at Cley.

Once again I have no new mammal sightings to report, although it looks as if a Hedgehog has been passing through and leaving a calling card en route. We saw one Hedgehog in the garden last year so I am cautiously optimistic.

The Grey Squirrel continues to hang from the Silver Birch, in its highly successful (and expensive) attempts at raiding the coconut and berry feeders. 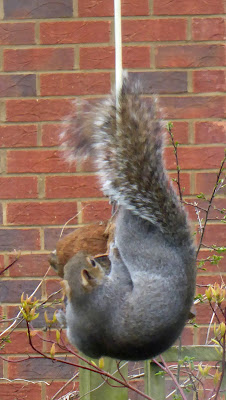 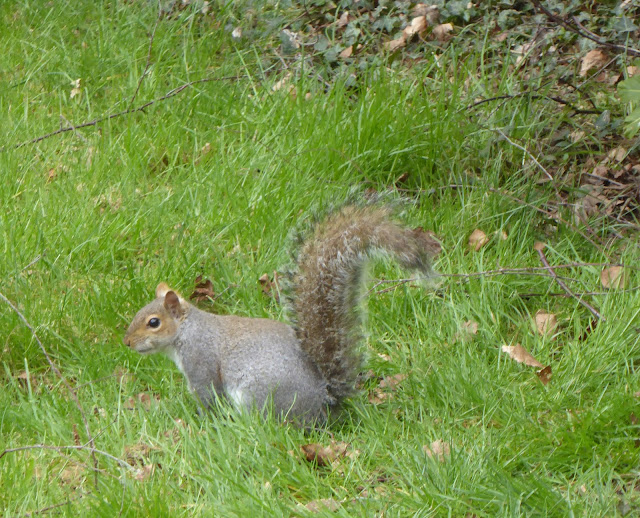 Avian sightings seen at any time since I began the Tree Following project are shown in pink.


No new Arachnids this month.

Fascinating post. I always admire the patterns on unopened catkins.
You are so lucky to have "native" ladybirds. Here all I ever see are the continental harlequin invaders!
Keep up the good work :)

Hello, the birch is one of my favorite trees. I think the bark is so pretty. I love the woodpecker and the cute robin. Have a happy weekend!

I love birch ad this is a beauty. I look forward to see the birch behind us get their new green growth.

Your photo shows how photogenic the old branch scars are, with the wrinkles--I've not noticed that before.