Welcome to my Tree Following post for February and early March 2016.

I am based in Suffolk, UK, where I have been keeping an eye on an Acer negundo (aka a Box-leaf Maple) and watching a Silver birch, B. pendula. I really enjoy following the Silver Birch, but have not found the Acer negundo such a rewarding tree to follow. I shall keep the Silver Birch but am swapping the Maple for a small Cherry sapling for my second tree.

You will find the other Tree Follower links by clicking the Mr Linky link here (or here) ... so do take the chance to have a look at these new posts! 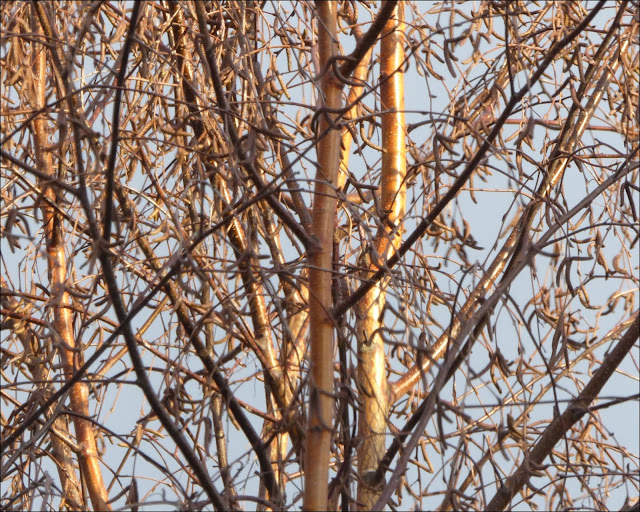 The Silver birch is awash with catkins (see photo above), but I am still waiting for the first bits of greenery to break through. It has been a mild winter here with a reasonable amount of rain, so it should not be long now. I have seen small shoots of green on the Hawthorns in my area.


The small Cherry, Prunus avium Sylvia, has two 'trunks' at present. These are really 'thin stems', and I have a feeling I should probably remove the newer one. The original trunk (which is more like a twig) has some fine buds on it, which I will keep an eye on over the next four weeks. This little tree began life with us in a pot, but we planted it in the garden last year, and it seems to have weathered the winter. 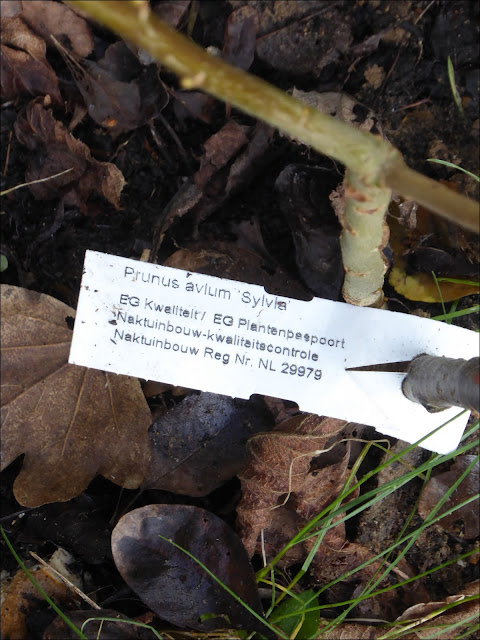 This is an odd-numbered month, so I will keep the update on my total tally of species seen around the Silver Birch or Cherry for April. I will, however, give a list of species seen since my last TF post:


We have had a couple of icy mornings this last month and one or two rather beautiful spells of stormy light at dusk. During yesterday's stormy sunset I noticed the fall of light on some tree trunks in the distance, way beyond my garden boundary (see photo below). I had seen the trees many times but had not realised until then that some of them were also Silver Birch. 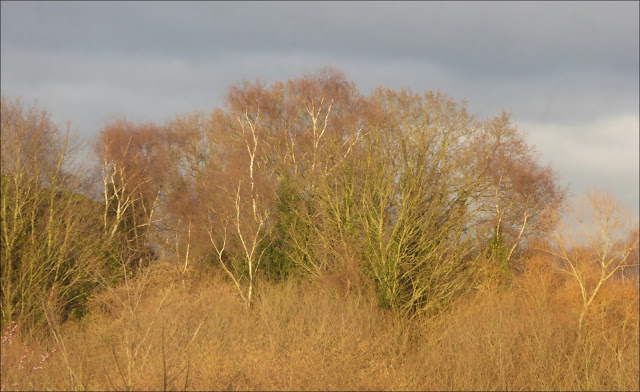 Speaking of which, I also discovered that Silver Birch (Betula pendula) trees were encroaching on a nearby SSSI with sandy soil, noted for its population of Silver-studded Blue butterflies (Plebejus argus - which sometimes appears in print as Plebeius argus). These butterflies - and I would love to see one - need a spread of heather, meaning that an increase in the amount of Silver Birch trees in this particular context is apparently not good news.

Sadly I have no new mammal sightings to report. The Grey Squirrel continues to visit the Silver Birch, in its attempt to carry off the coconut and berry feeders before the birds have a look in! I have now seen my first (active) 7-spot Ladybirds of the season, but they were not in the vicinity of either of my Tree Following trees.

And finally, a little more about the small Cherry. It flowered for the first time the year before last when it was in a pot. It seemed to be growing very slowly and we thought it was probably pot-bound, so we planted it next to the Acer negundo. It has certainly grown significantly and survived the winter, but we hope to have the chance to ask a garden expert about it soon. I would love to think that there will be more blossom this year!

Excellent update - and I see from your picture of the Prunus that it's true (as I have been recently told) that cherries do have clusters of terminal buds.
Thank you for your great support :)

I guess all of us in the Northern Hemisphere are awaiting the leaves flushing out.

I was happy to see your photo of the cherry buds. I just learned (from the Squirrel Basket) that oaks and cherries have clustered terminal buds ... sure enough! I plan to check some of our wild chokecherries after the snow melts more.