Tree Following - April to May

Welcome to my Tree Following post for May. What a lot of transformations have taken place this month.

But before we take a look, I just want to add that these tree posts form part of a wider project run by Lucy Corrander from the Loose and Leafy blog. I am following a Silver Birch, B. pendula, in Suffolk, UK and what has up to now remained something of a mystery tree. You will find the other Tree Follower links on the Loose and Leafy blog ... so do take the chance to catch up with happenings in the arboreal world!

Words drafted on 1 May: this tree has changed quite significantly in the last few weeks, but I am still (slightly) unsure of its identification. It was suggested to me that it might be a kind of Prunus, but I was not totally convinced. It seems to have some Maple aspects, but I do not think it is totally maple-like either! Please let me know if you have further ideas.

Update of 5 May: my latest thought ... could it be an Ash-leaf Maple (Acer negundo - also known as Box Elder)? If so, these trees are called Junk Trees in Michigan because of their prevalence. Despite the name, these trees are not Elders: they belong to the Sapindaceae group. They are also known as Sugar Ash, Red River Maple and Black Ash.

The shoots are essentially green, but they have a rose-coloured waxy coating in the spring (see two photos down). The leaves are pinnate (good illustration; though remember, this tree is not an Elder!) in arrangement.

Part of my initial fascination with the new tree (apart from wanting to identify it) was the fact that, unlike the Silver Birch, it did not seem to attract birds. So far I have only spotted a single feathered creature - a Chaffinch - on its boughs. Perhaps the leaf growth will encourage others. There is an insect on the other side of the Atlantic called the Western Boxelder Bug.

The tree has suddenly become a mass of green leaves, but I sense that spring is later at this stage than a year ago - in my home patch at least. This time last year the tiny Flowering Cherry near the Silver Birch was sporting pale pink flowers and the Ceanothus was distinctly blue. This year they are both still green at this point. However, the Silver Birch is striding towards summer, and I feel its fellow trees and shrubs will follow soon.

Intermittent spells of warm sunshine have brought with them some early insects in the area around the Silver Birch. The photo below shows a Hoverfly (perhaps Syrphus?). 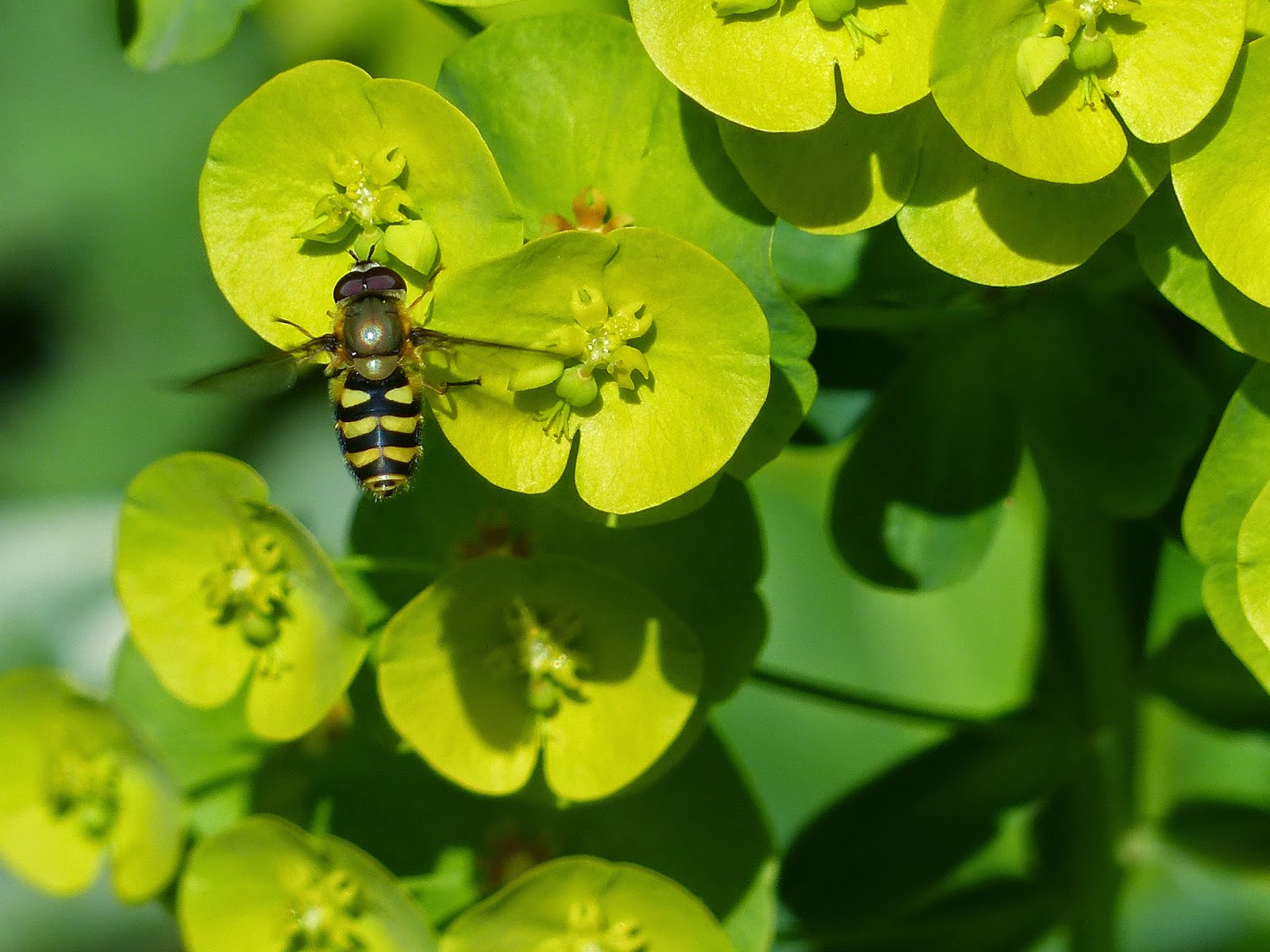 The next photo depicts a Green Shieldbug ... 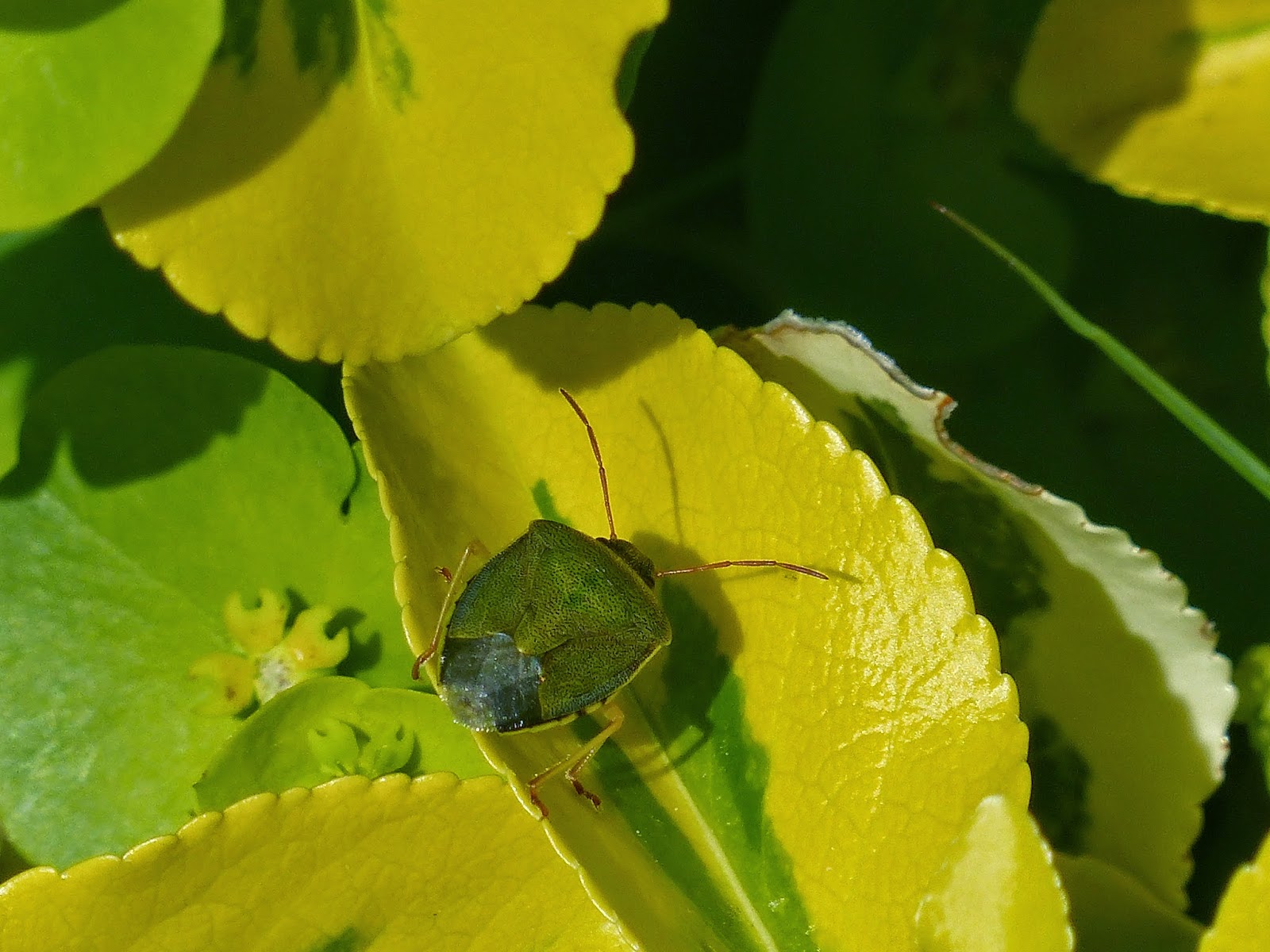 ... and I think the next photo may be a Cereal Leaf Beetle. 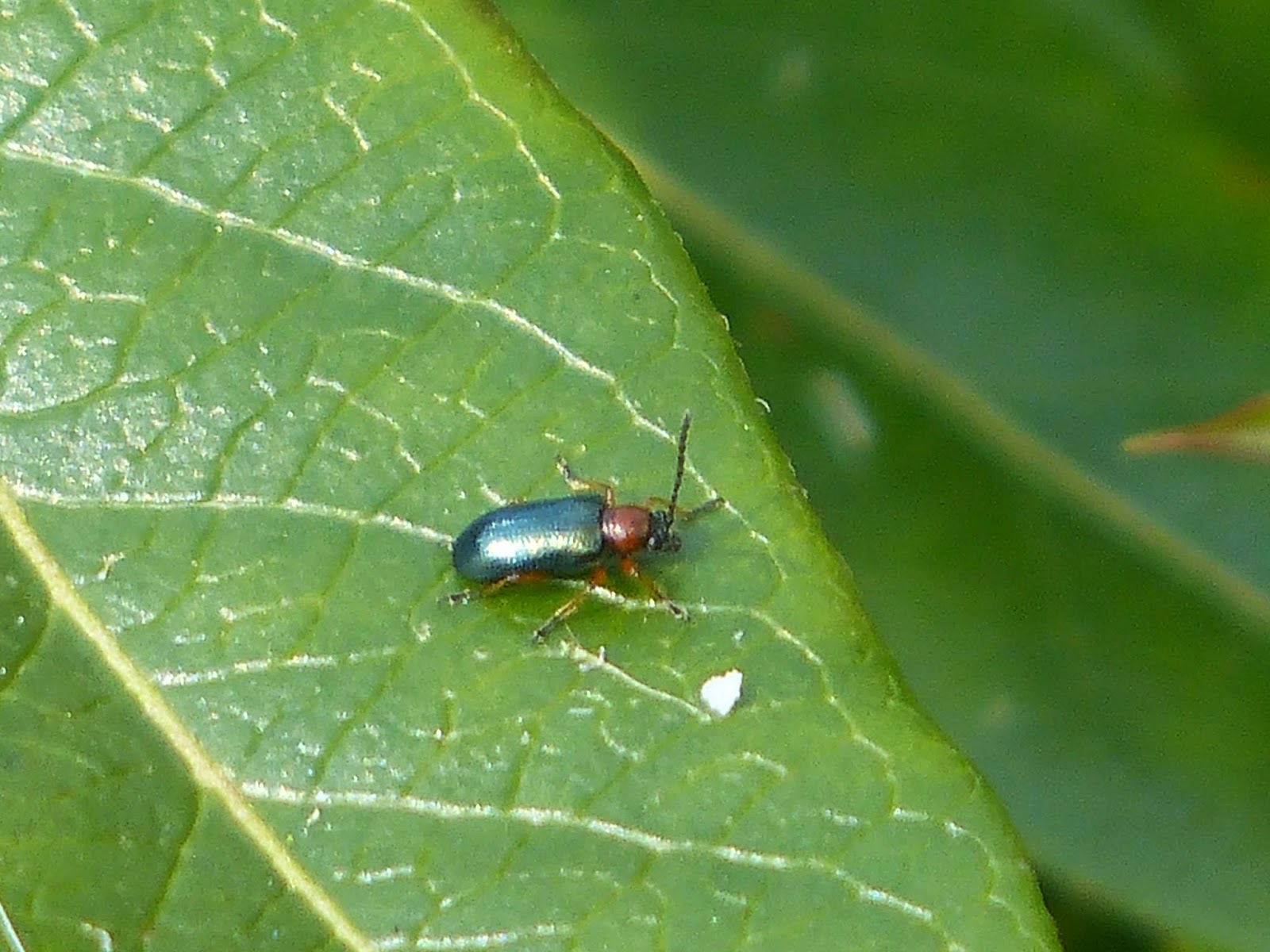 Perhaps most exciting (to me) was the discovery of the Zebra Spider on the decking posts near the Silver Birch. I was keeping a careful look-out as I have occasionally seen Ruby-tailed wasps (see post for last June - and scroll down a bit) on these posts. I think it is still a bit soon for these 'metallic' insects. However, it was not long before I noticed signs of movement from what appeared at first to be striped ant-like insects. It was only when I blew up the photos that I realised that they were not insects but arachnids on account of their eight legs. You can read about these jumping spiders on the Suffolk Wildlife Trust site here. 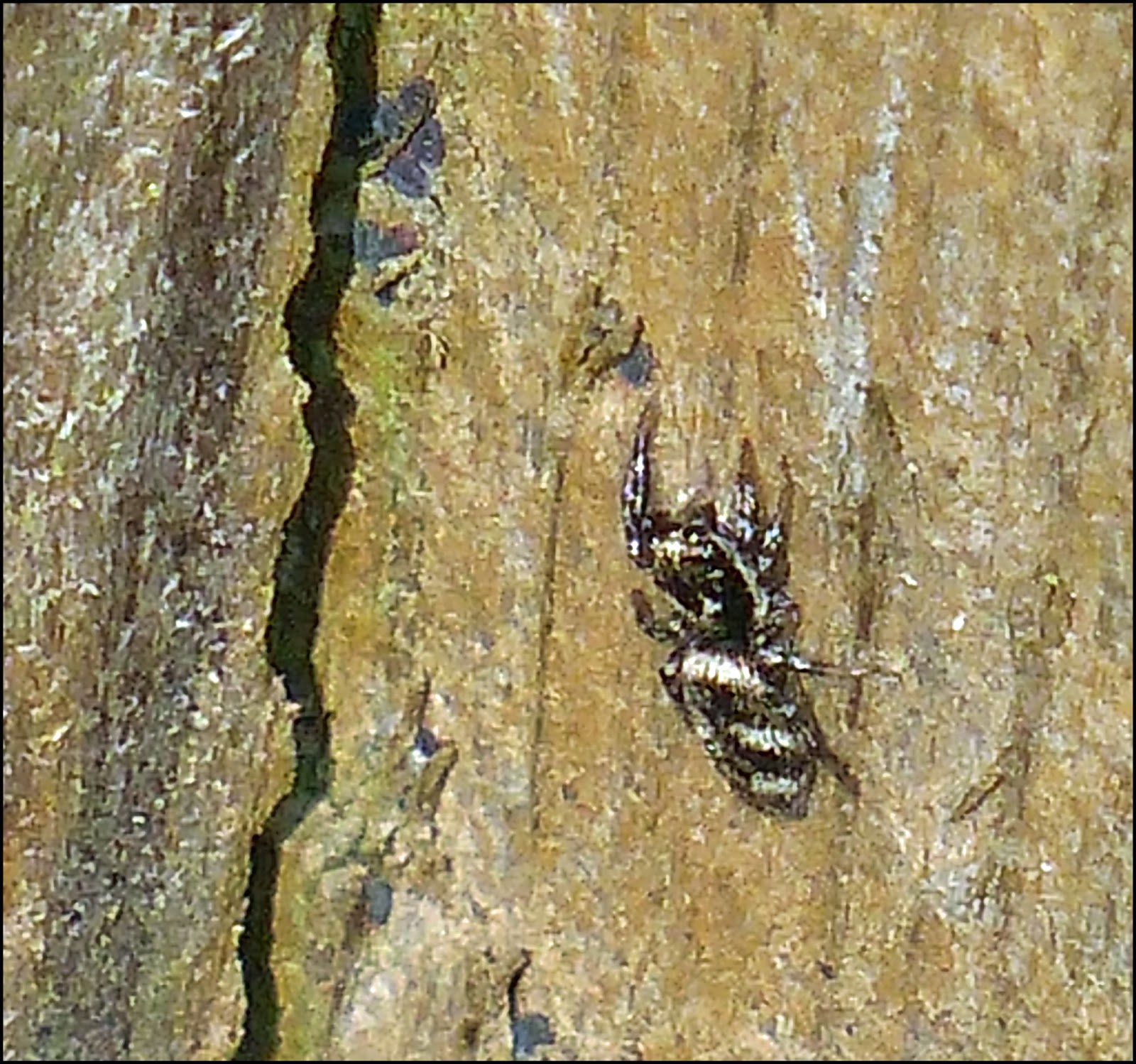 As ever, please feel free to comment or correct. I am very much feeling my way as I go. Meanwhile I will leave you with my latest list ...

I've chosen a tree for its location this year rather than for its beauty or nature. I don't yet know what kind it is but am working on an acer hypothesis. Like you, I'm thinking spring is late where I live. By next month leaves will (hopefully!) be fully open and we will more easily be able to compare trees.

Fantastic that you are continuing with your Silver Birch - it's truly interesting to know what grows under, near and on a tree. I'm not a bird person (embarrassed down-casting of eyes!) but am fascinated by the insects you come across.

It's a fabulous idea! I'd never know what tree to follow. I got my first look at horse chestnut flowers yesterday, they are huge, put them on my blog.

The list of wildlife is impressive, love how trees can host so much life.

Your photos are exquisite! I like that you have such a complete list of wildlife sightings for your tree; that's a great idea.

Lovely photos, definitely an Acer but further than that I wouldn't like to say

Still not quite sure what your tree is but I do like the shape of the seed pod hanging down, have you thought of putting it on iSpot, I use them quite a lot. It's nice to see it all bright and green.
Amanda xx

Caroline I do so enjoy your Tree Following...the silver birch is coming along and your mystery tree does look like an acer of some sort especially the seed pods....fascinating all the insects you see on the trees.

Impressive lists of wildlife and lovely photos :) I love the double seed keys on the first tree. Would agree with Amanda i-spot is very helpful. Our silver birches are in full leaf - amazing how the garden has greened up since Easter!

A great post. I love the way you carefully note and list the wildlife down to the tiniest bug. . Your new tree is intriguing. It must be a sort of Acer.