I shall make a firm decision in the days ahead, but I shall probably decide to keep up with my Silver Birch for another year, as it may be interesting to compare and contrast some of my 2014 and 2015 observations. However, I have almost decided to add in a 'bonus tree' ... so watch this space. 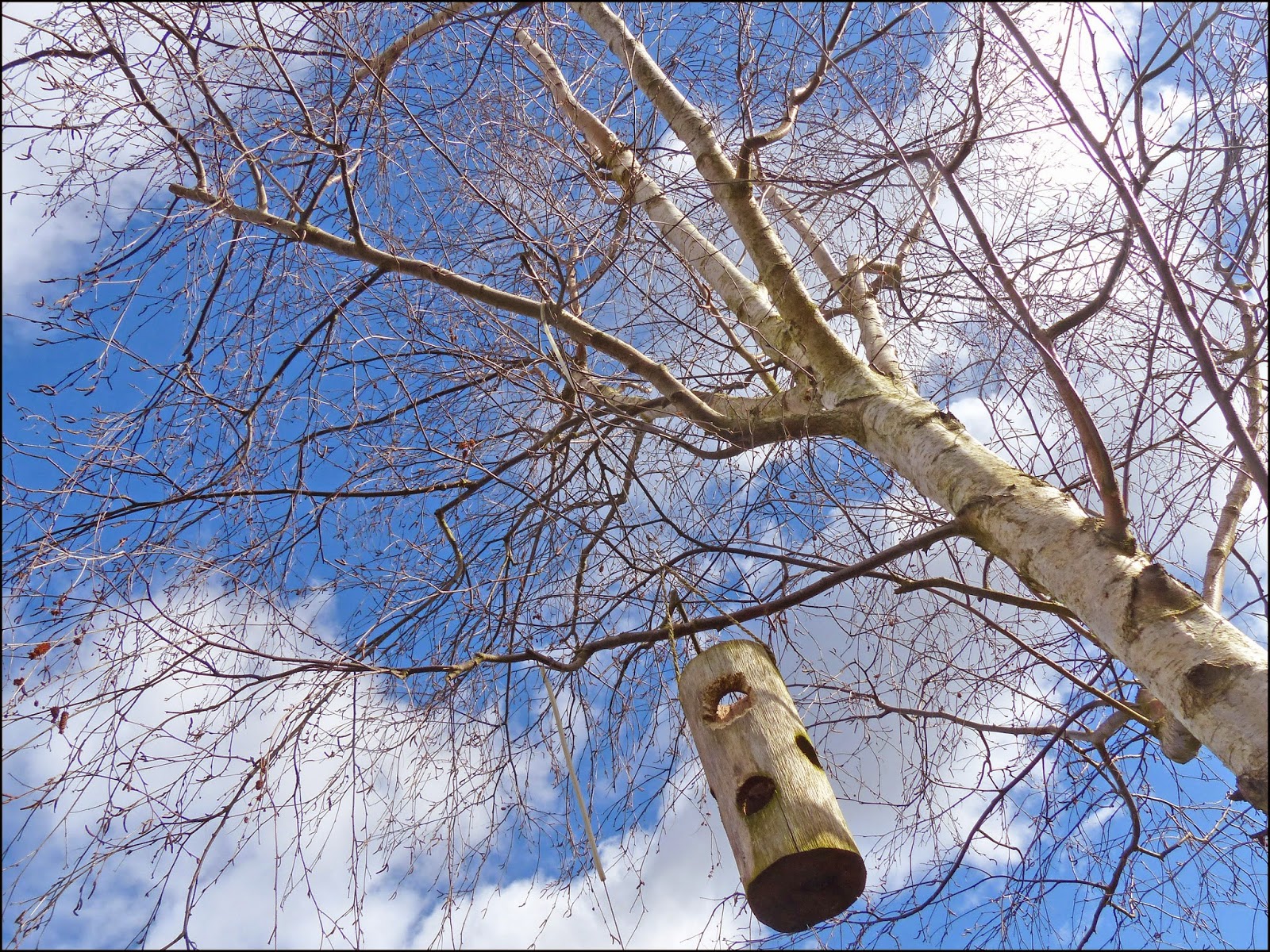 Although Silver Birch trees have been in the news as a backdrop to the scene that has gone viral of the Green Woodpecker and the Weasel, I felt that there was surprisingly little to report, back here at the ranch this month. I had hoped for more signs of spring, and indeed they are there, but you still have to keep a sharp eye open for them. A shrub in our front garden is just beginning to come into leaf, and I shall be delighted when the Silver Birch shows signs of green growth.

For the time-being I must content myself with the catkins that 'sprout' in pairs from the end of all but the highest bare branches and the tight 'leaf buds' that can be seen if you look carefully.

Just as I was feeling a tiny bit despondent about the lack of recent birdlife in my home patch, a strange noise made me prick up my ears. Something was afoot, and it sounded like a disturbance of some kind. I looked out the window as quickly as I could, only to see the distinctive body of a Sparrow Hawk, as it flew past the birch fronds at some speed and headed on towards the tall trees that line the local nature reserve beyond. As I type the danger has passed, but there is a distinct hush, and I imagine the small birds lying low in the undergrowth. I expect the will resume their spring songs in due course. I suspect the disturbing noise was caused by the Magpies in response to the arrival of the bird of prey.

Postscript: two of the first birds to be seen some thirty minutes later were the Bullfinches, adding their distinctive sparkle to the scene. The male's rosy colour shows up particularly well in the bare twigs.

so here's one I took earlier!

One or two of the local birds are turning their attention to the breeding season, and pairing up in preparation, though the lively Long-tailed Tits have been noticeable by their absence. I thought I would turn to poets and song-writers who have been drawn to the Silver Birch. I have a strong recollection of a happy day (c.1971) around the camp fire during our Brownie Revels, singing the Canadian folk song, 'Land of the Silver Birch, home of the beaver', as we munched our baked potatoes and toasted marshmallows. The song rings in my ears to this day, reminding me that our suburban tree would probably have been better suited to a more rugged existence in northern climes. Strangely in her poem, 'Child's Song in Spring', Edith Nesbit (of The Railway Children) described the Silver Birch as 'a dainty lady' in 'a satin gown'. I came across this rather lovely Silver Birch poem by James Nash for Valentine's Day.

Avian sightings (on, in and around the Silver Birch, seen at any time in the last 11 months) are in pink.

I saw a 7-spot Ladybird just outside my Tree Following range this month, so am looking forward to more invertebrate signs of the new season in the days ahead. I have also seen two Bumblebees, but neither were bear the Silver Birch. There have been a few moths, and each time I see one, I am conscious how shamefully little I know about these fly-by-nights.

If I were to make a bird list, it would look very much like yours - with the exception of Sparrowhawk. Kestrels are quite common here and for a couple of years there were red kites. Inland one almost always sees buzzards over the fields. They seem to stay in pairs all year round so if I see one I look for another.

Caroline, great report on your tree. The woodpecker and weasel are famous now around the world. It is nice to see the new growth appearing and spring is on the way.. Have a happy weekend!

I do like the Silver Birch tree, so it will be interesting to see if there is anything different this year.
Going back to recording my Ladybirds and Harlequin's, if I put them on Ispot (I have a account ) do I still need to record them with the Ladybird recording. It doesn't take much but have got a little confused as they are all linked together... Do you know ?
Thanks Amanda xx

I love how you keep these observations going on your tree. And your lovely bird looks a lot like our bluebird. I am winding down my observations of my silver maple soon, but i look forward to hearing more about yours Caroline.

A good idea to follow for a second year and compare findings Caroline. I do look forward to seeing just what you have in mind for the Bonus Tree.
I really admire your wildlife recordings - puts many of us to shame. Well done on having the dedication. I'm impressed :)

What wonderful information you've included in this month's post. The wildlife you can see on and around it is just marvelous, as is the tree itself.

I am amazed at your ability to keep up (and identify) so many birds and insects. Visiting from Crafty Green Poet's blog.

I'm so looking forward to your catkins developing! Lovely tree and a great contrast between the silvery bark and the blue sky.
Our garden bird list here is the same as yours except we very rarely see goldfinches and bullfinches, the jays have now gone elsewhere, we only hear the yaffle (green woodpecker) and I have seen a sparrowhawk exactly once, chasing a dunnock over the fence. Peep!
Keep up the good work :)