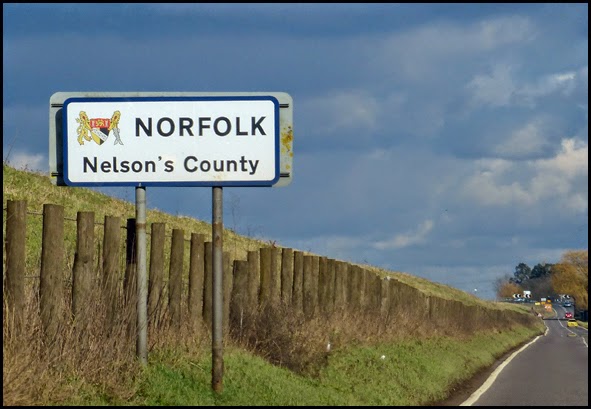 Last Saturday was cold day, teetering on the brink of spring,
but with one foot definitely still in winter.
We headed off to Norfolk (UK) in search of swans at WWT Welney.
This is the migrating season,
so we were not sure how many would still be there ... 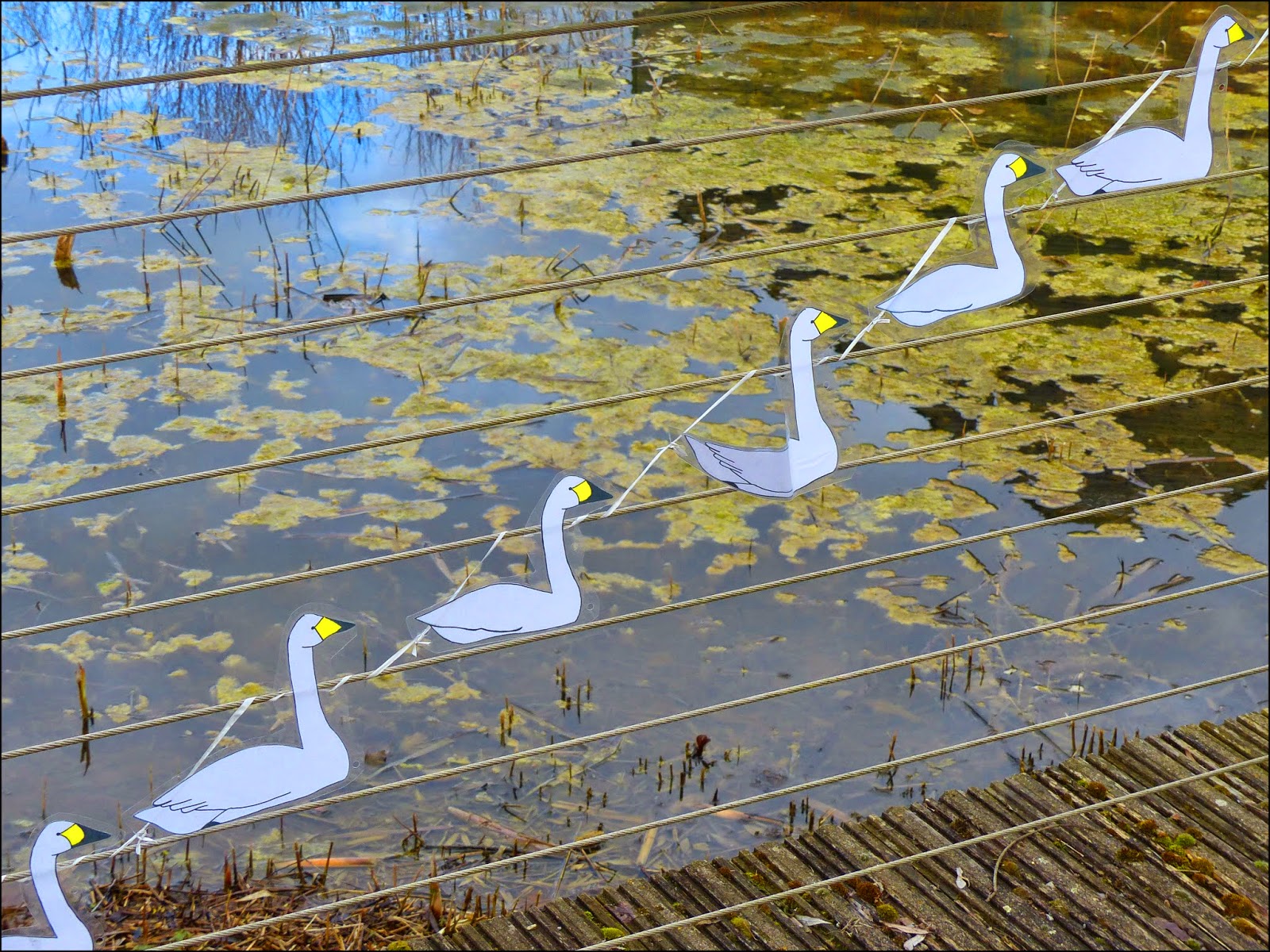 We left Ely and Littleport and drove through the fens,
between dykes and wide fields of black soil.
You can see which way leads to the swans! 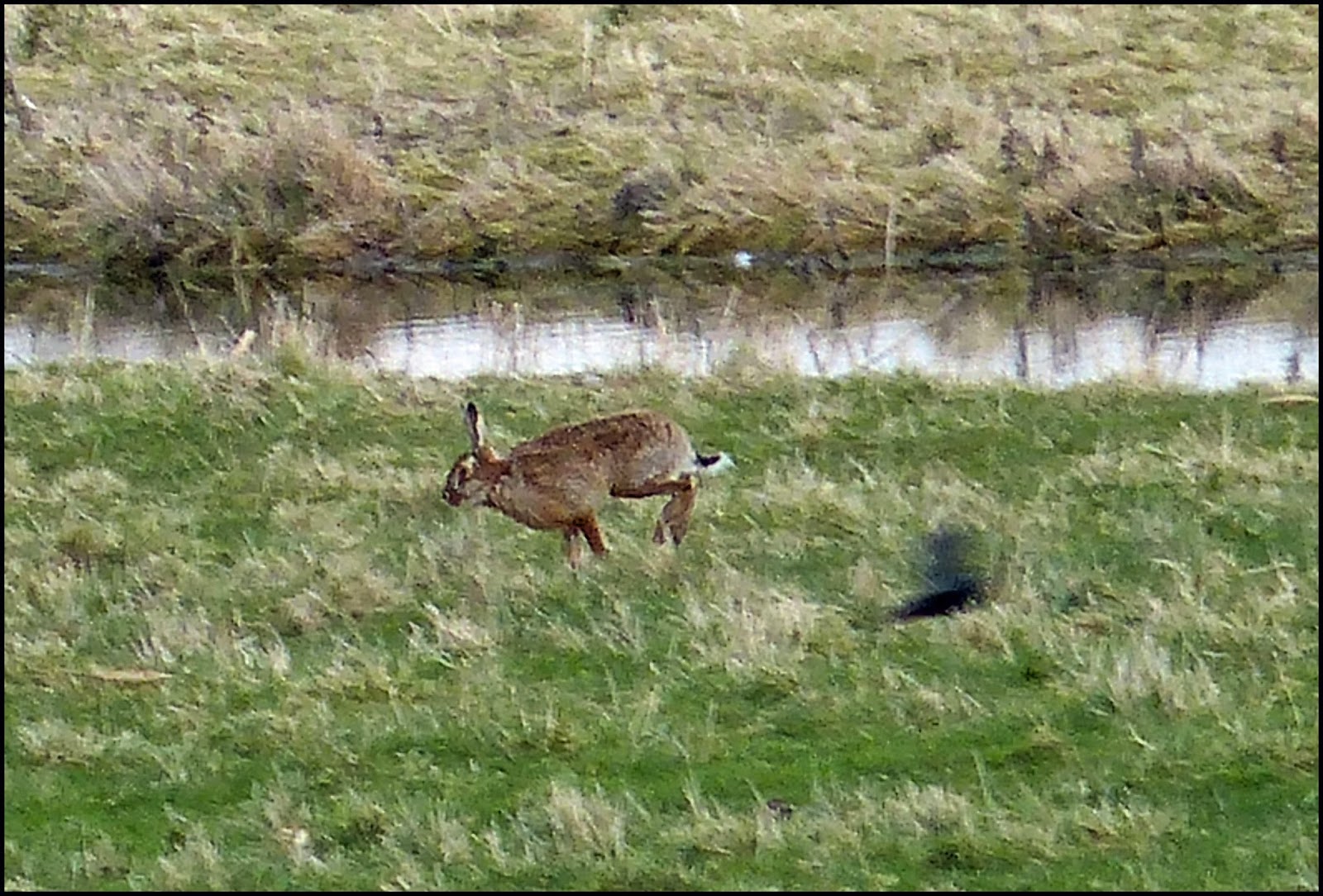 A hare-spotting walk was in progress when we arrived,
and while we were too late for this,
we kept an eye out for these lovely animals.
We were rewarded with a couple of fairly distant sightings. 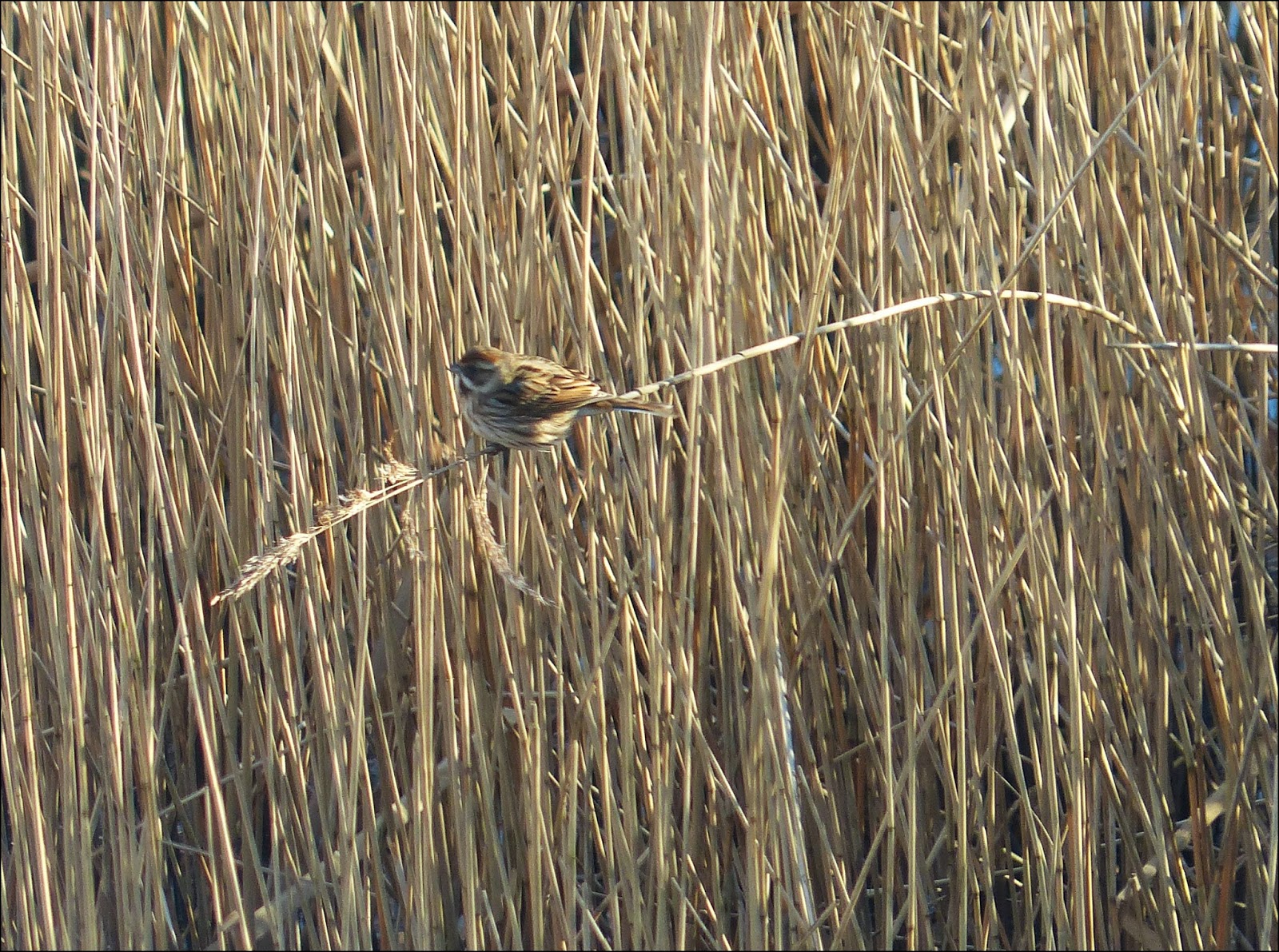 The wind was brisk at times,
and there were bursts of activity on the marsh
during the calmer spells.
We enjoyed keeping an eye open for Reed Buntings. 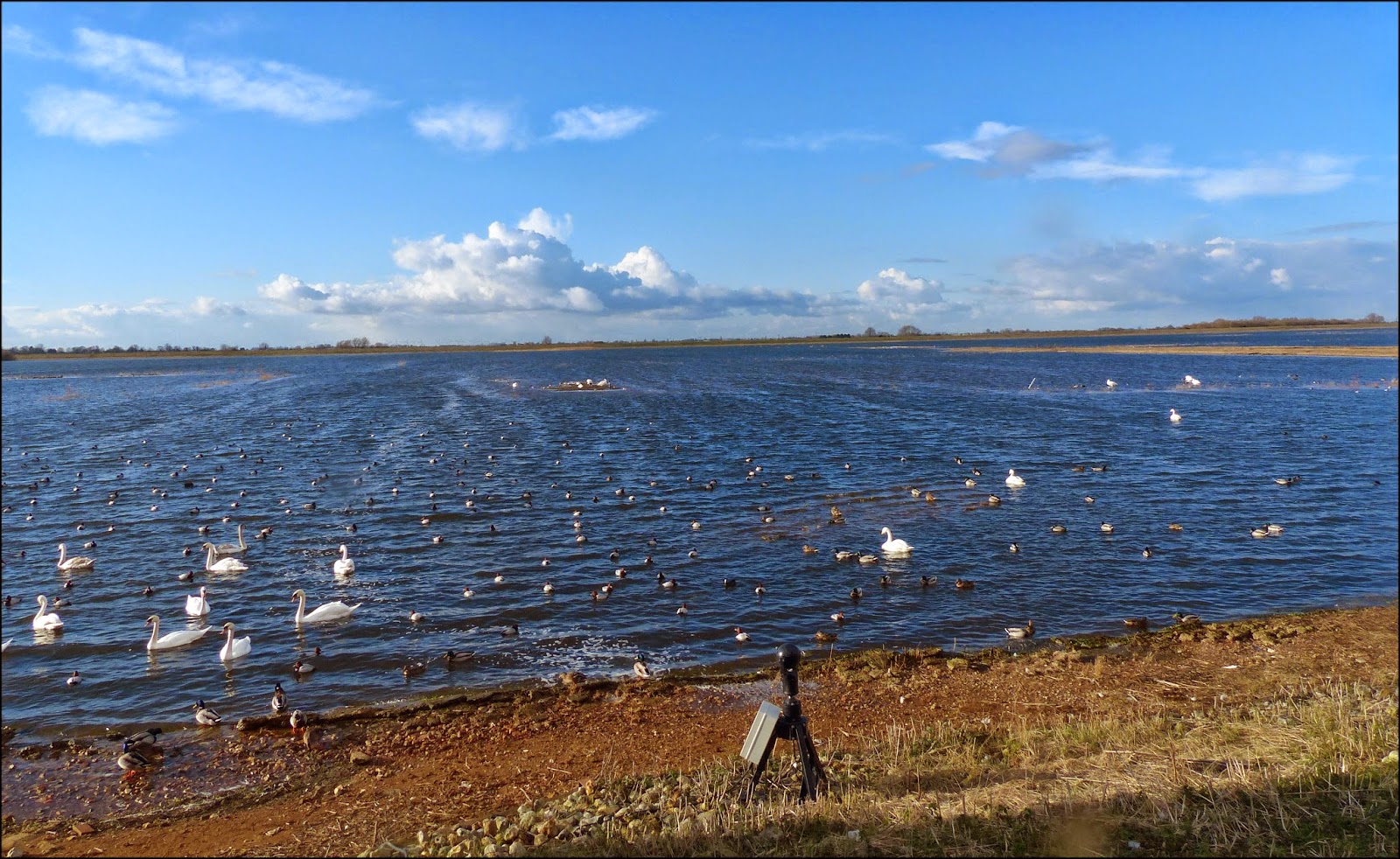 We love looking out over the Ouse Washes,
and enjoying the sense of space.
East Anglia is renowned for its wide skies. 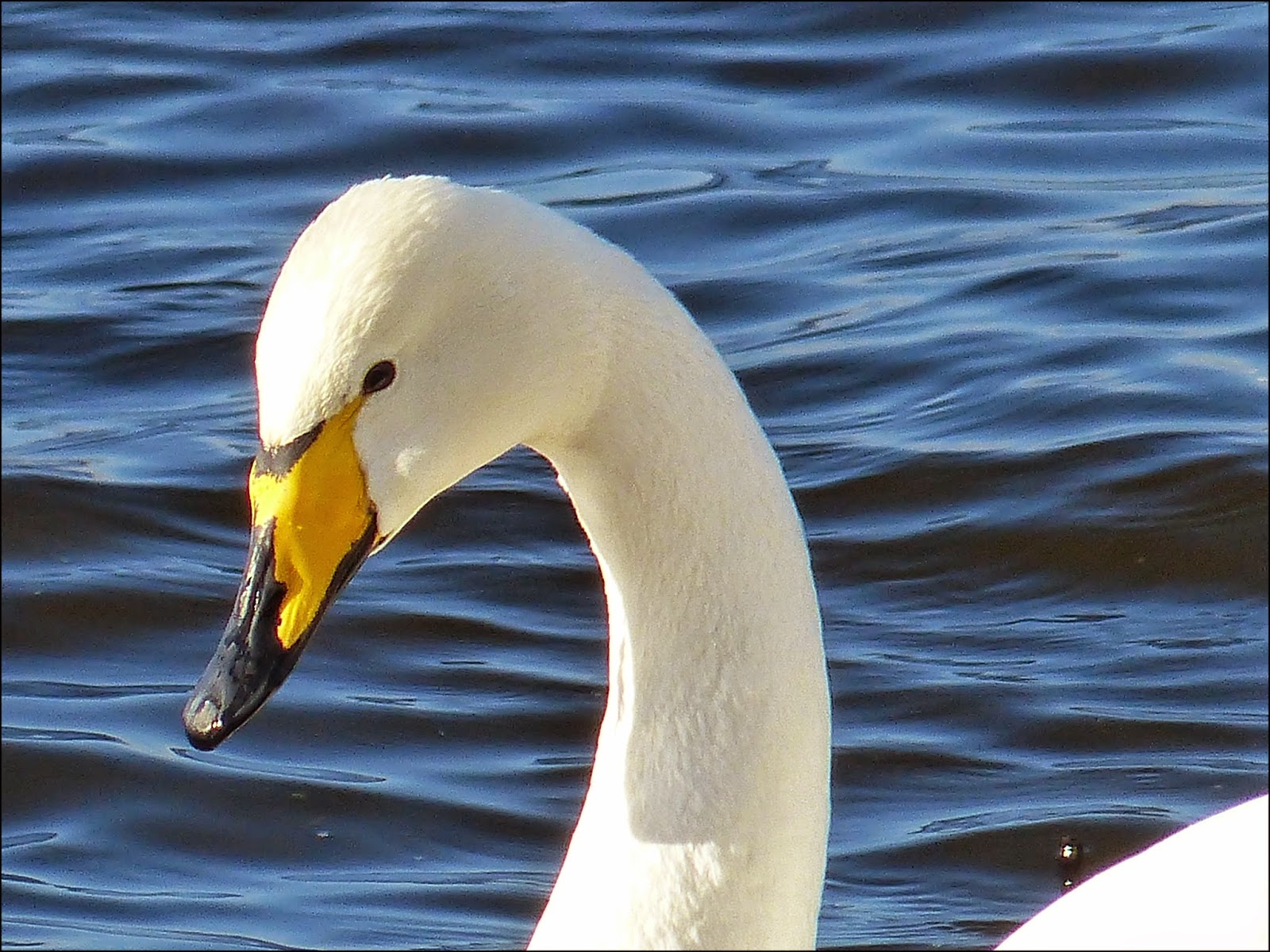 Almost all of the Bewick's Swans had already departed
for their breeding grounds in Russia.
However there were some stunning birds left,
like the Whooper above and the Mute swan below. 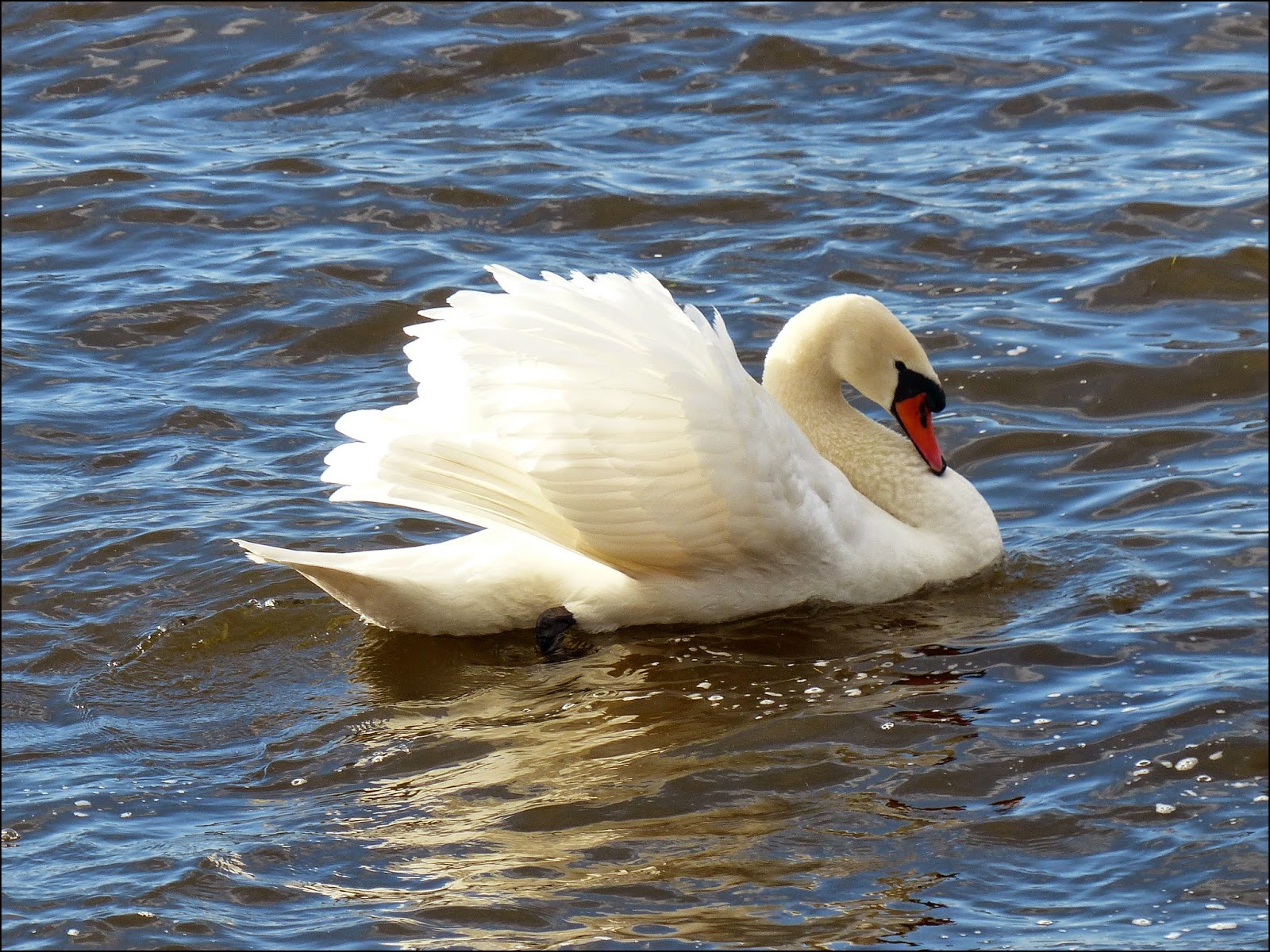 We watched two swan feeds during our time on the reserve,
each accompanied by a commentary.
I found it particularly helpful to learn
that Whooper swans have a yellow wedge
(beginning with 'w' for Whooper) on their bill,
while Bewick's swans have a distinguishing yellow blob
('b', of course, for Bewick's).
Mute swans are easy to recognise
with their orange bills - no mnemonic necessary!
There is a useful swan ID chart here. 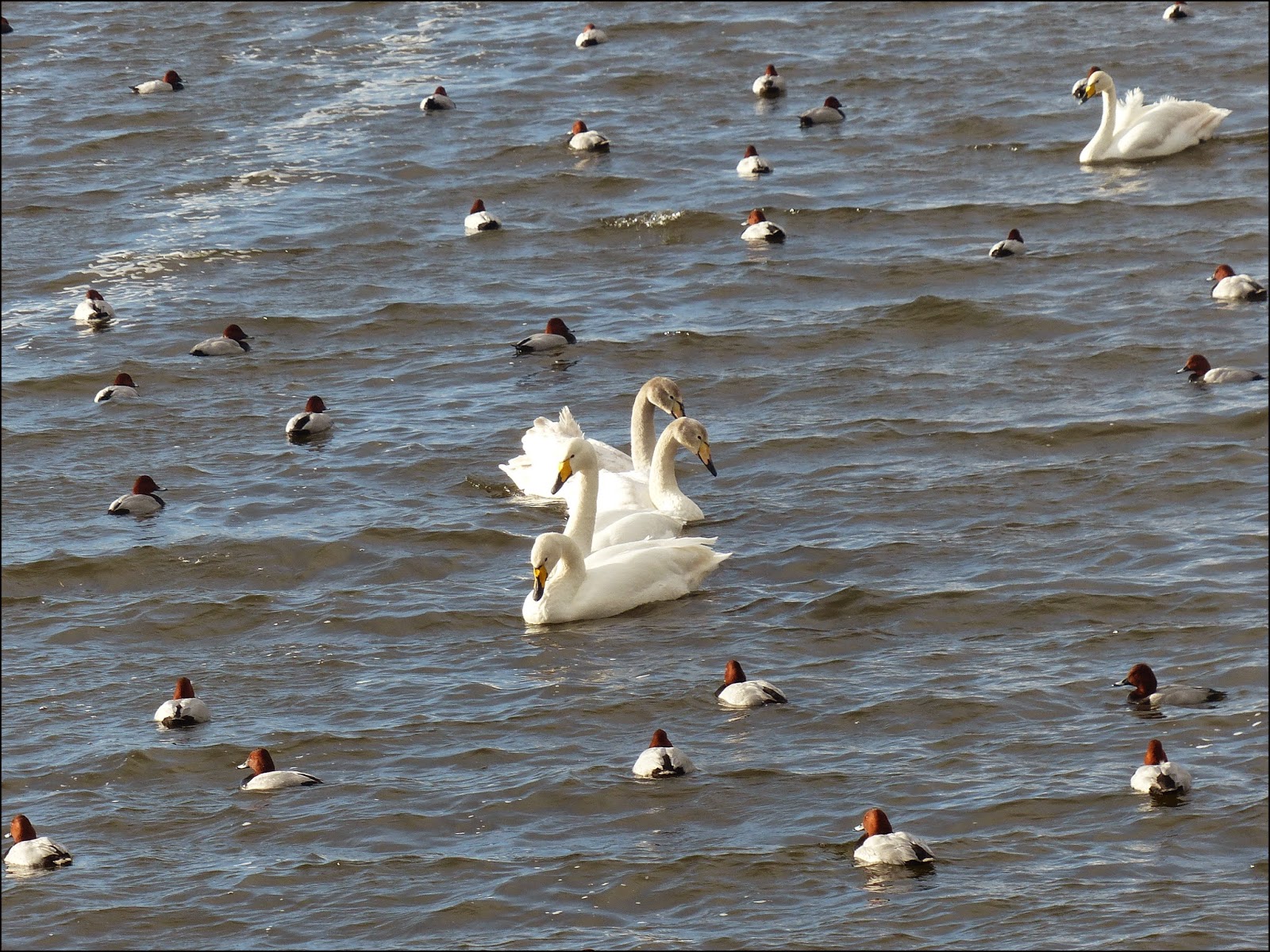 The swans were surrounded by male Pochard.
Most of the females are currently in Spain. 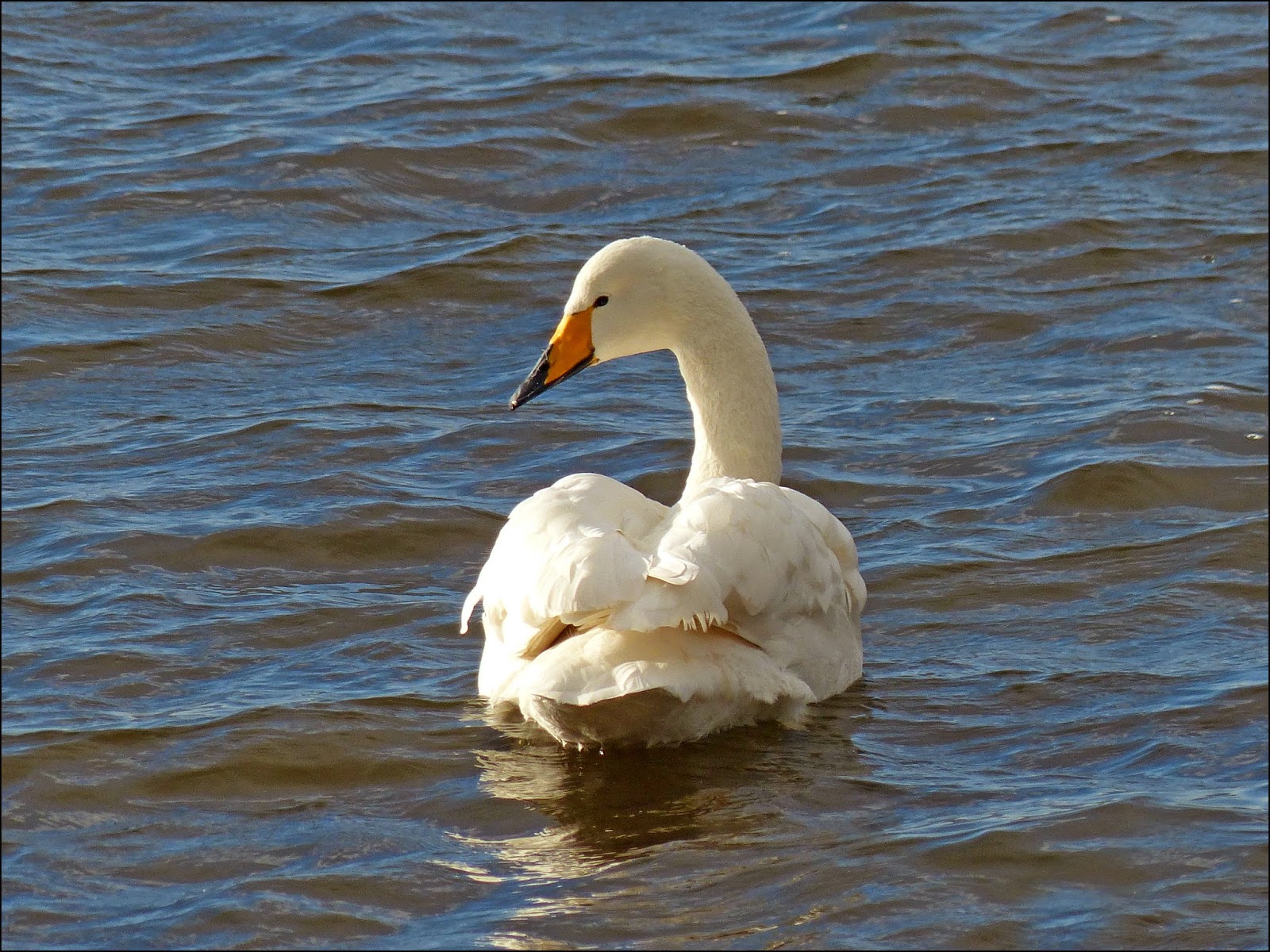 Whooper swans are so elegant ... 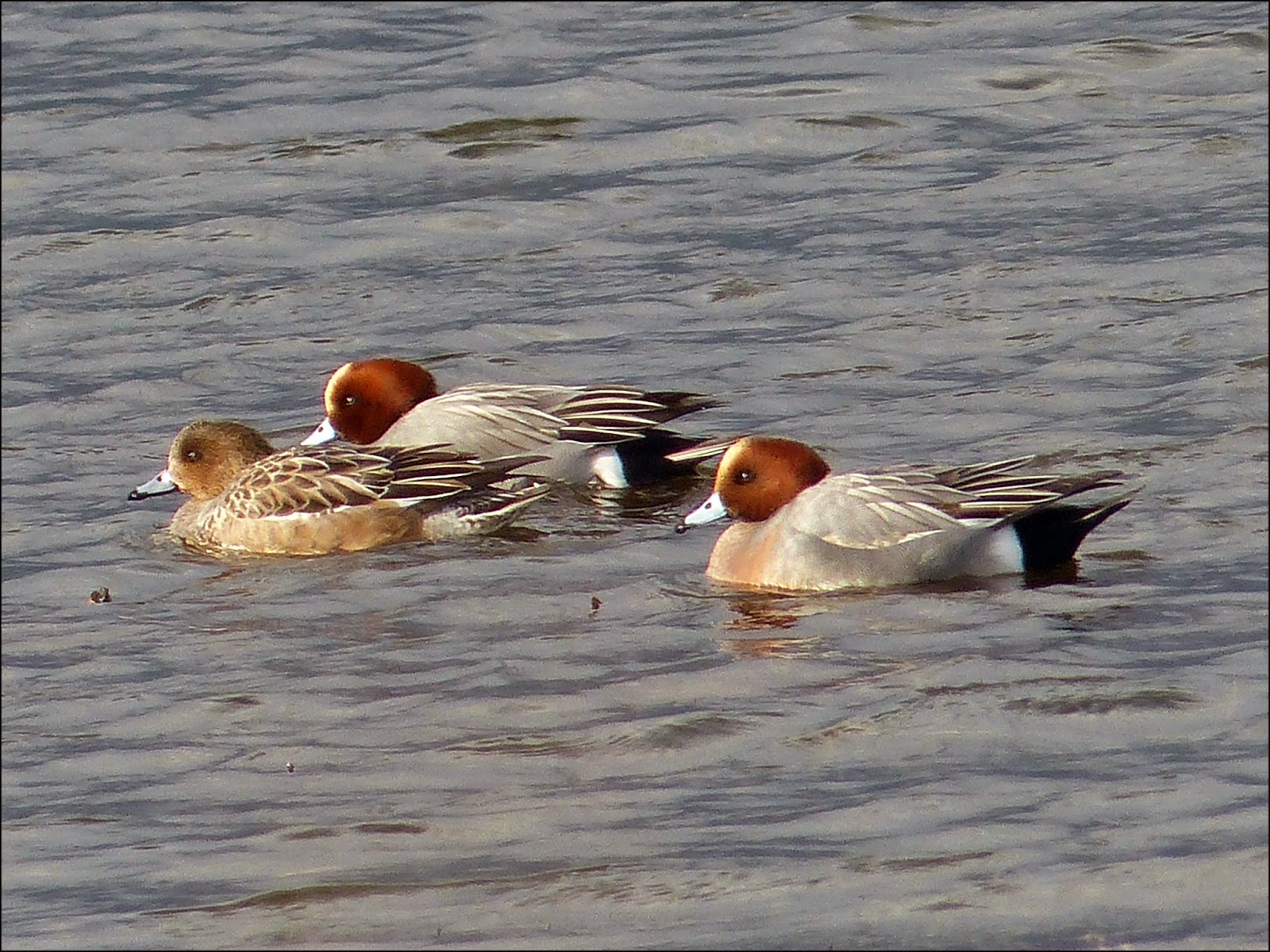 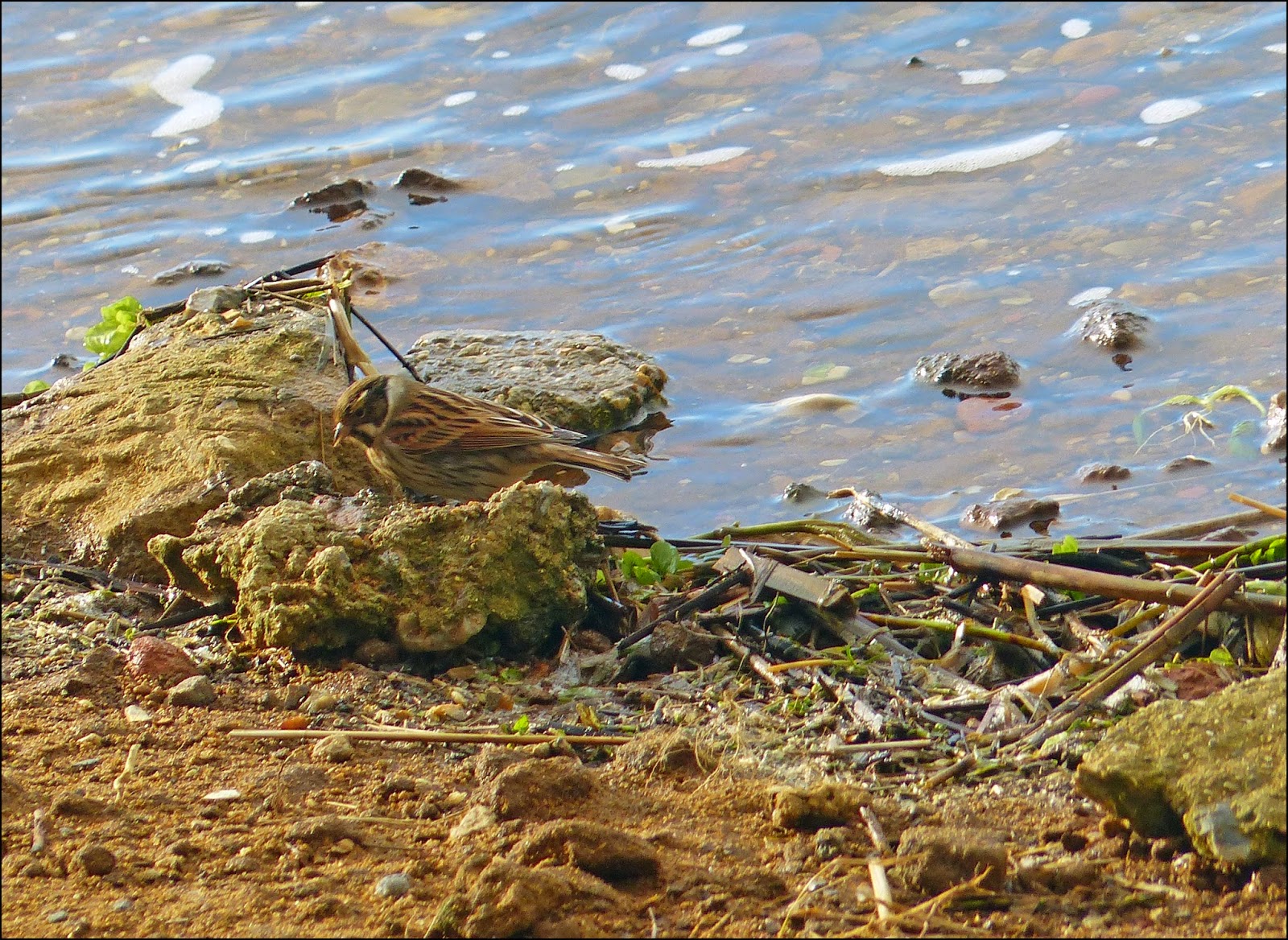 How's this for waterfront camouflage? 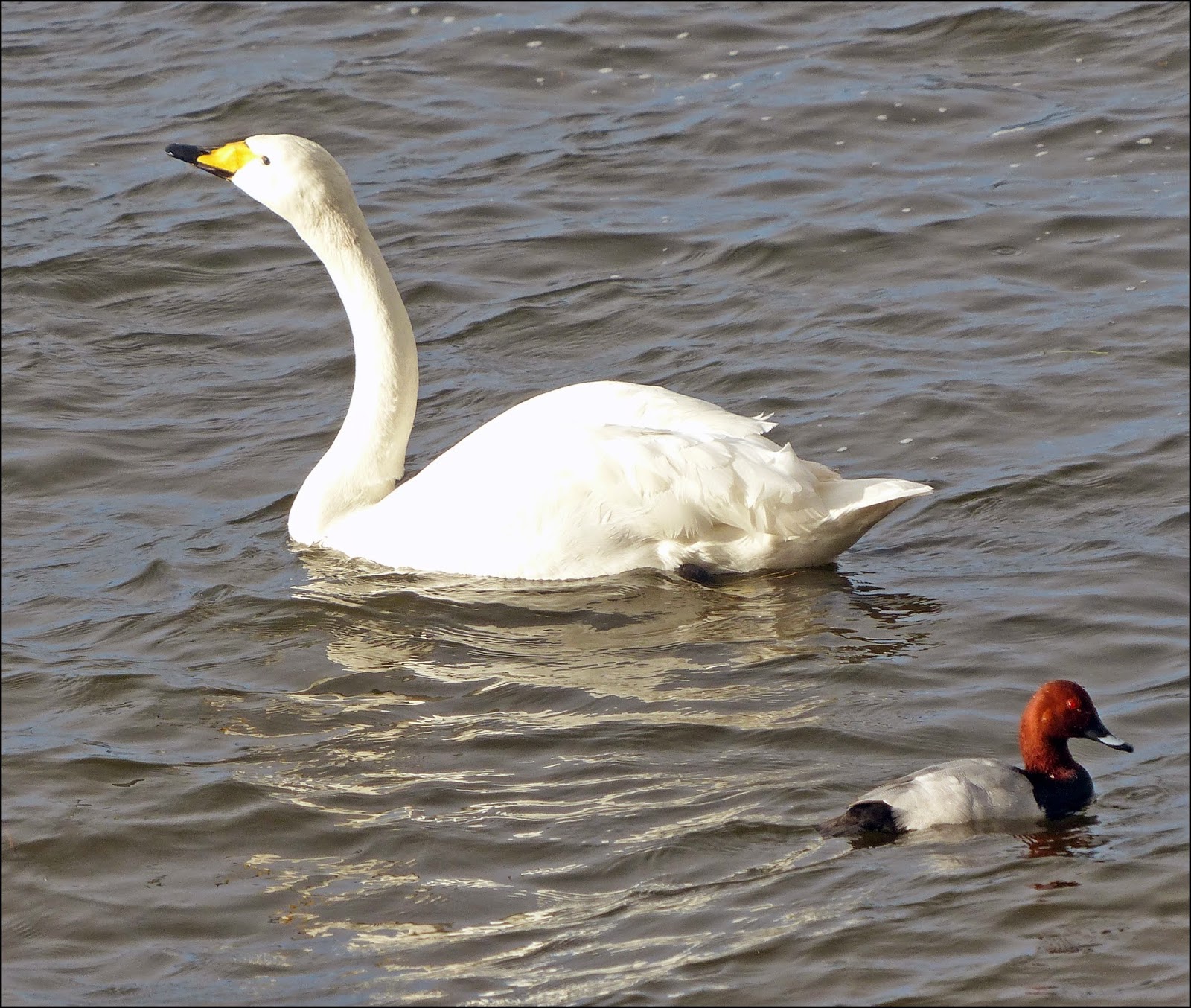 Pochard have bright eyes,
but the camera seems to have enhanced this particular one a bit! 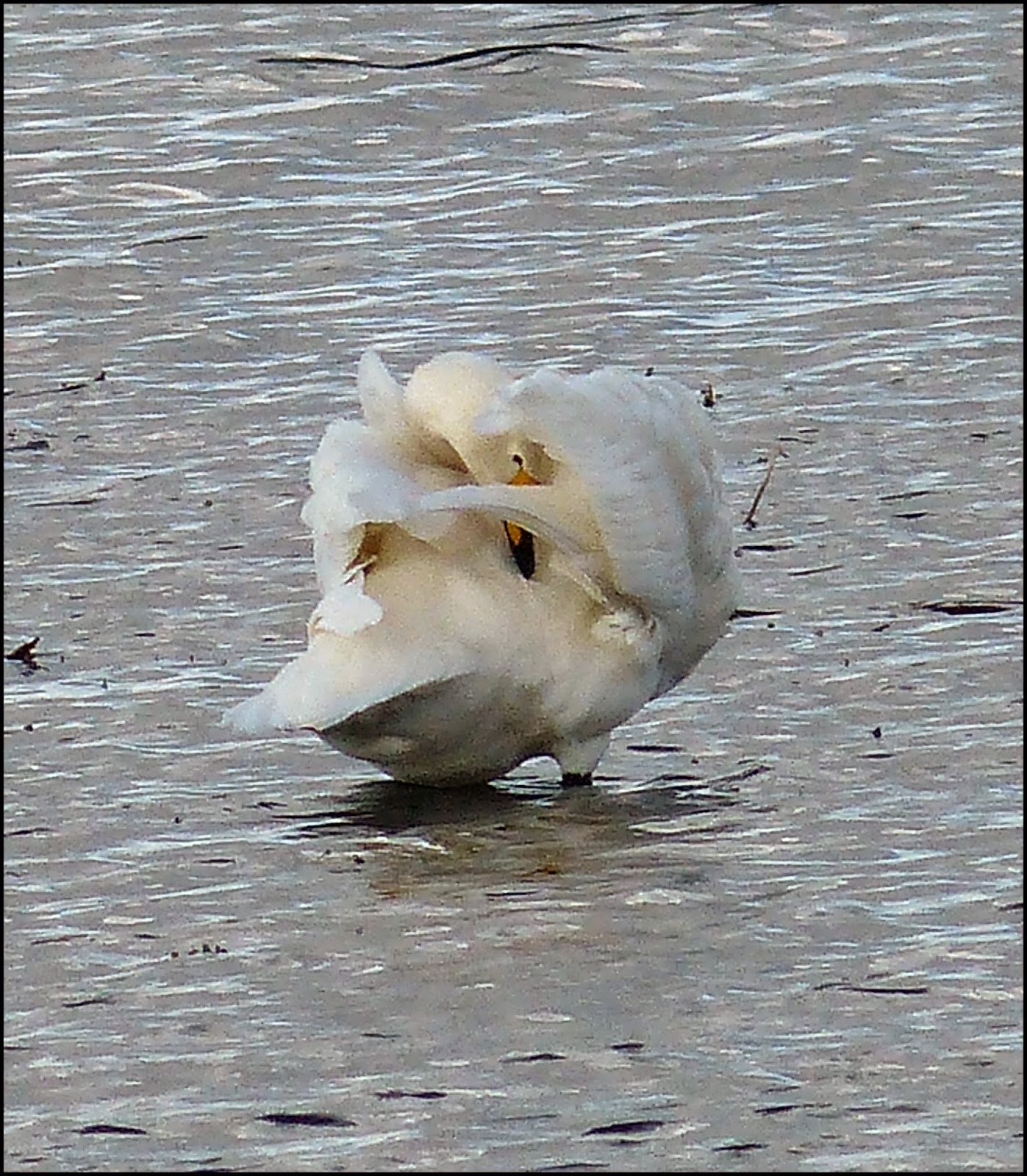 There was a bit of feather ruffling going on ... 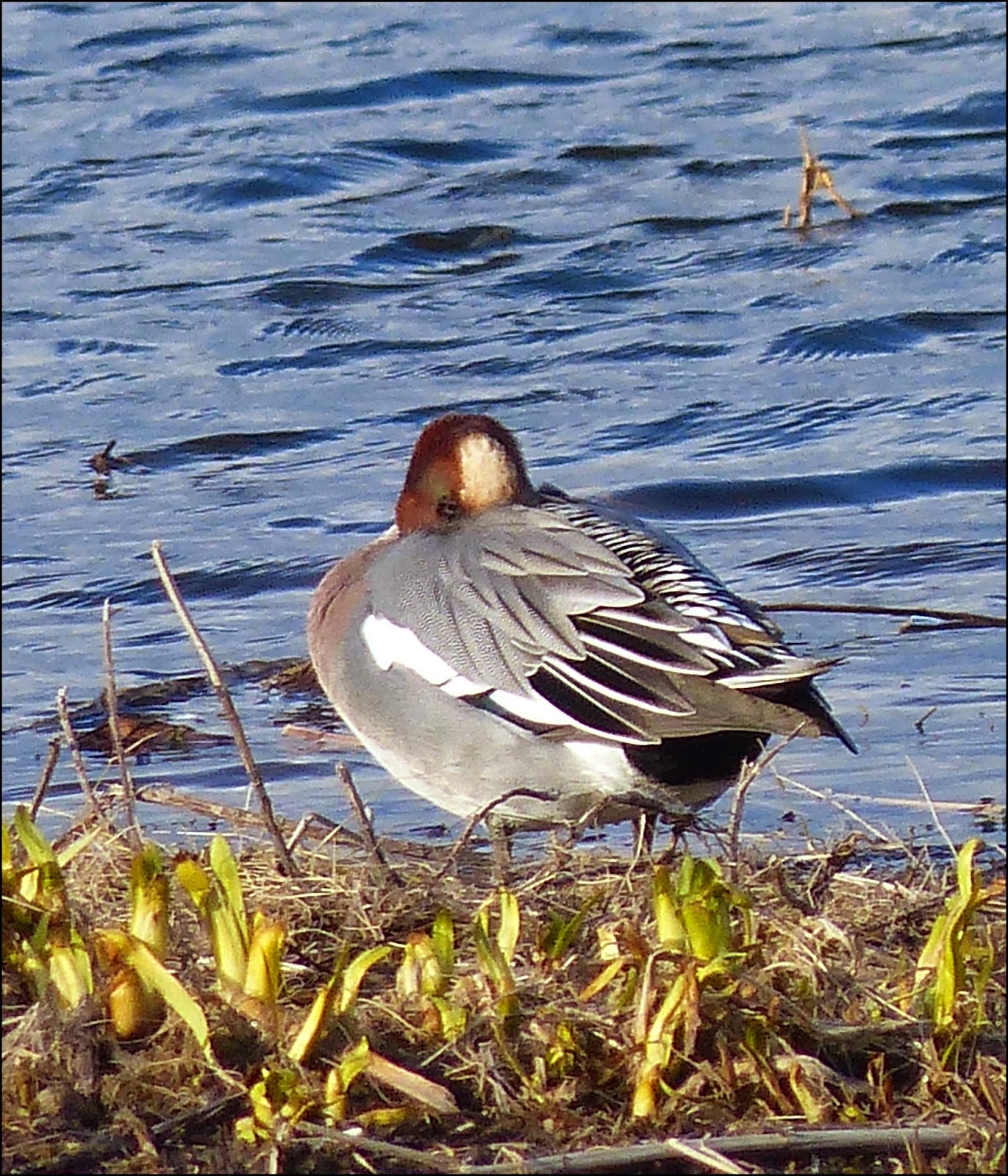 ... and a bit of sleeping. I love the feathers. 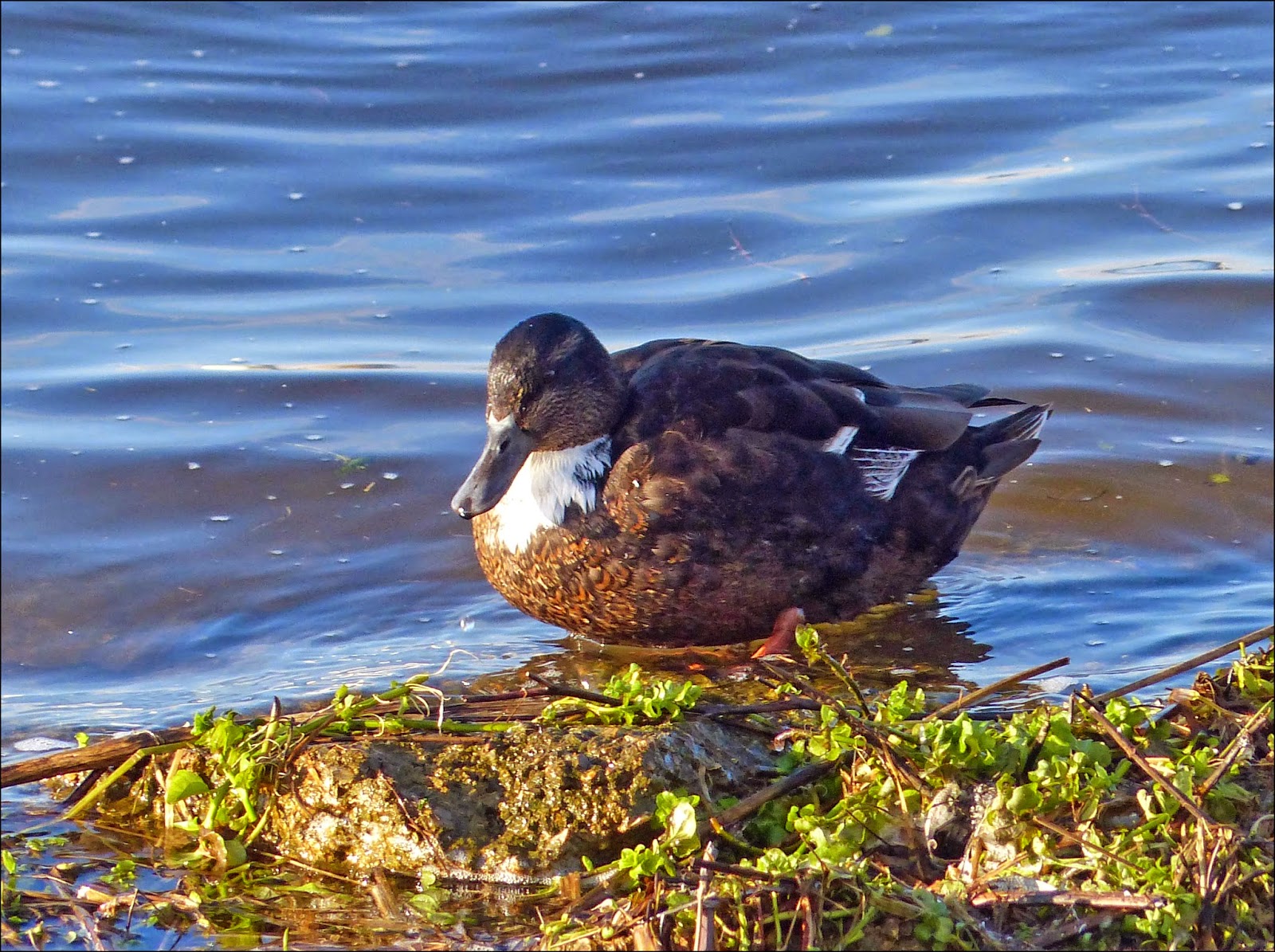 I'm guessing that this duck
is probably a domestic variant of the Mallard. The hares were not very active - but just wait until March arrives! 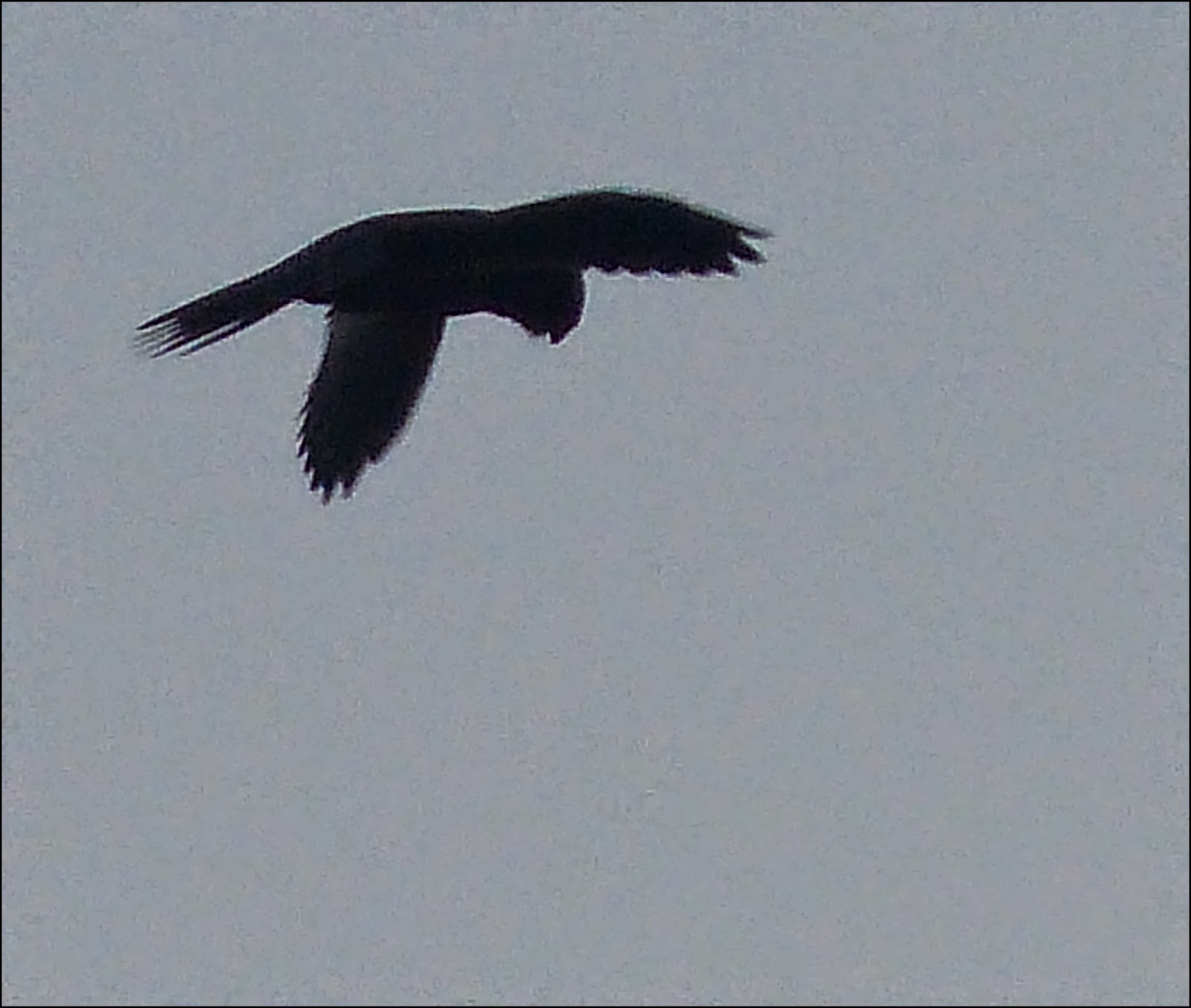 As the daylight began to fade,
we noticed a Kestrel hovering above the water. 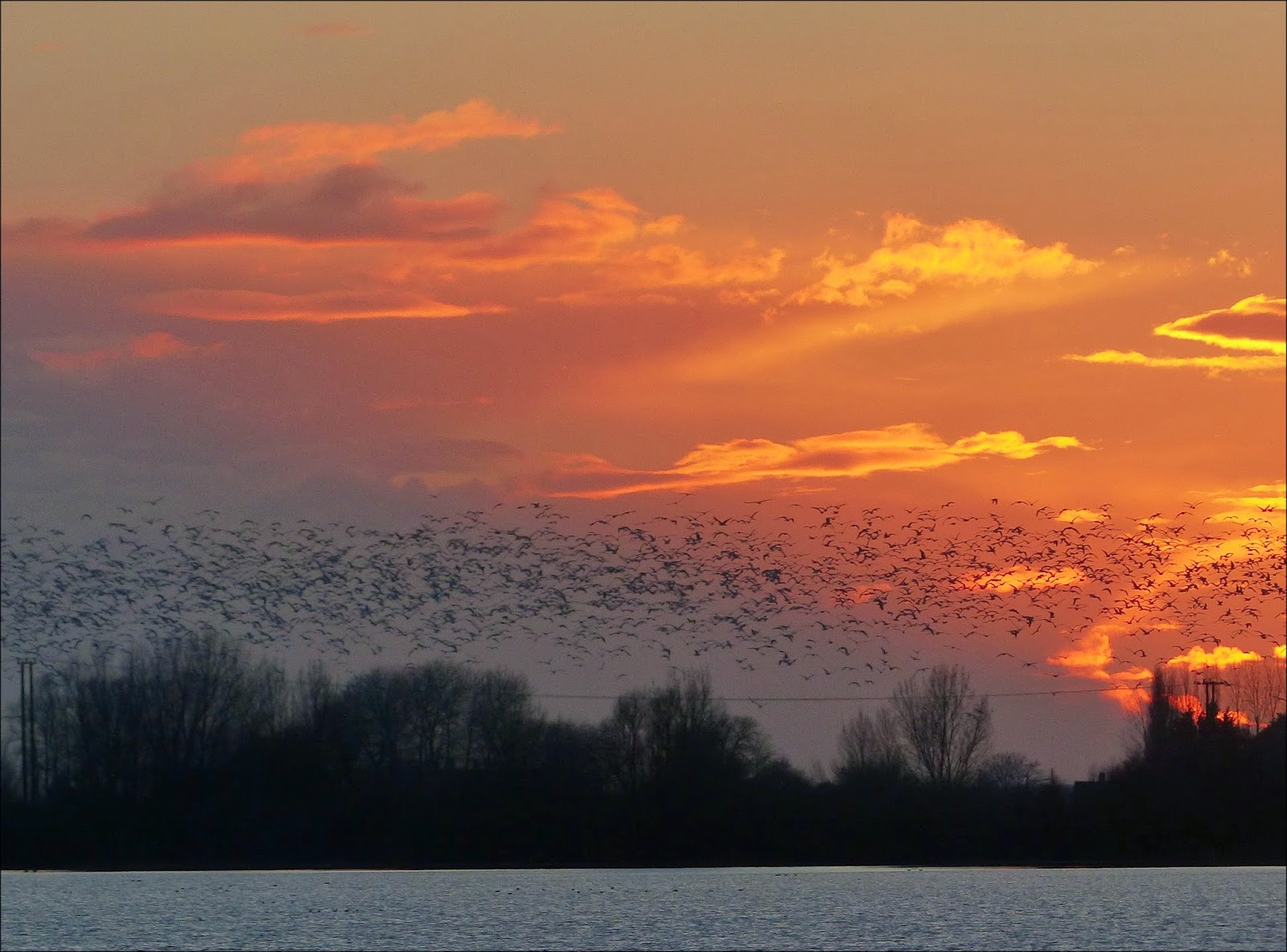 The sun began to set as huge flocks took to the sky.
We particularly enjoyed watching the Lapwing. 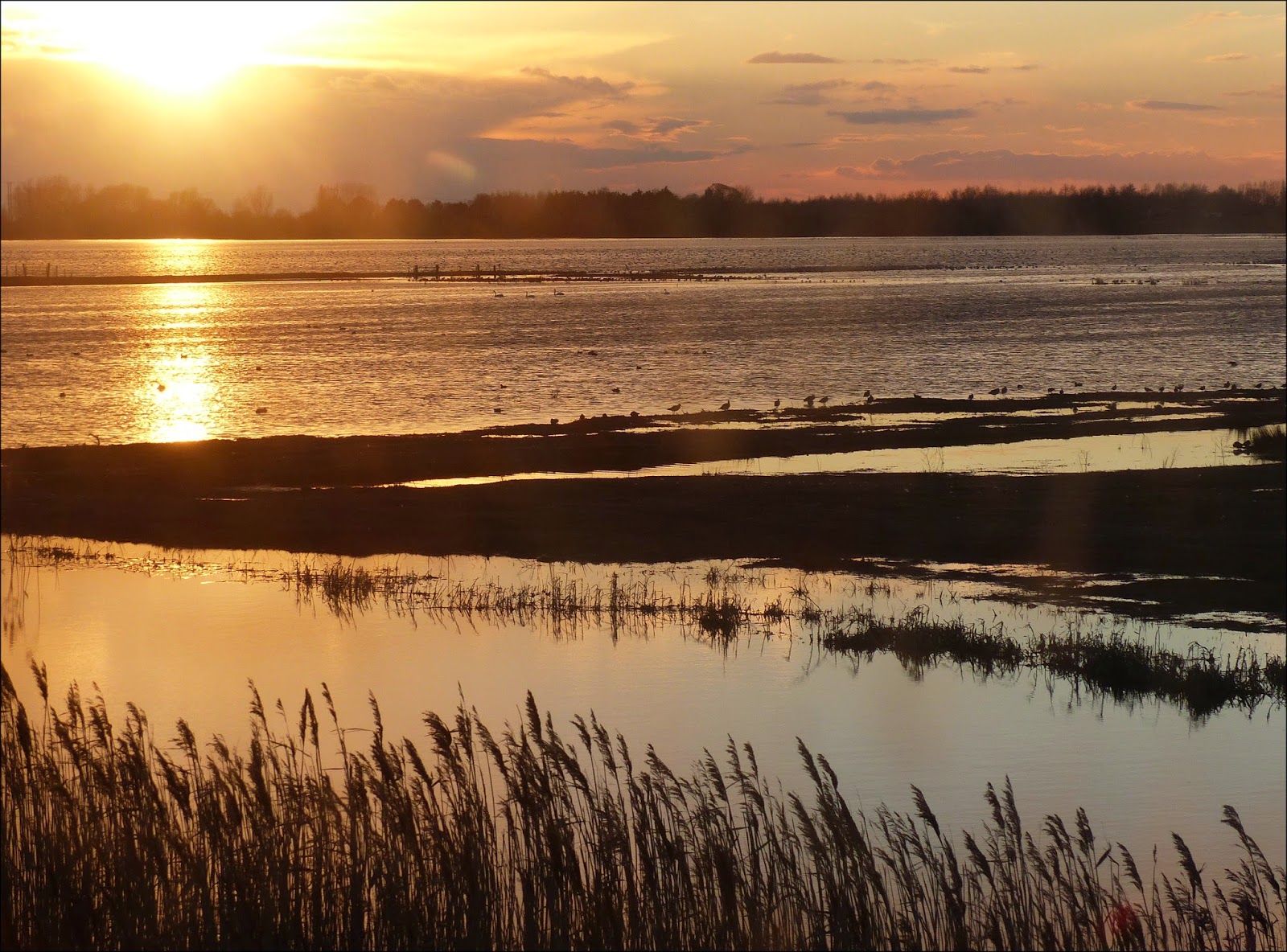 A sense of peace pervaded the reserve
in between the frantic bursts of activity. 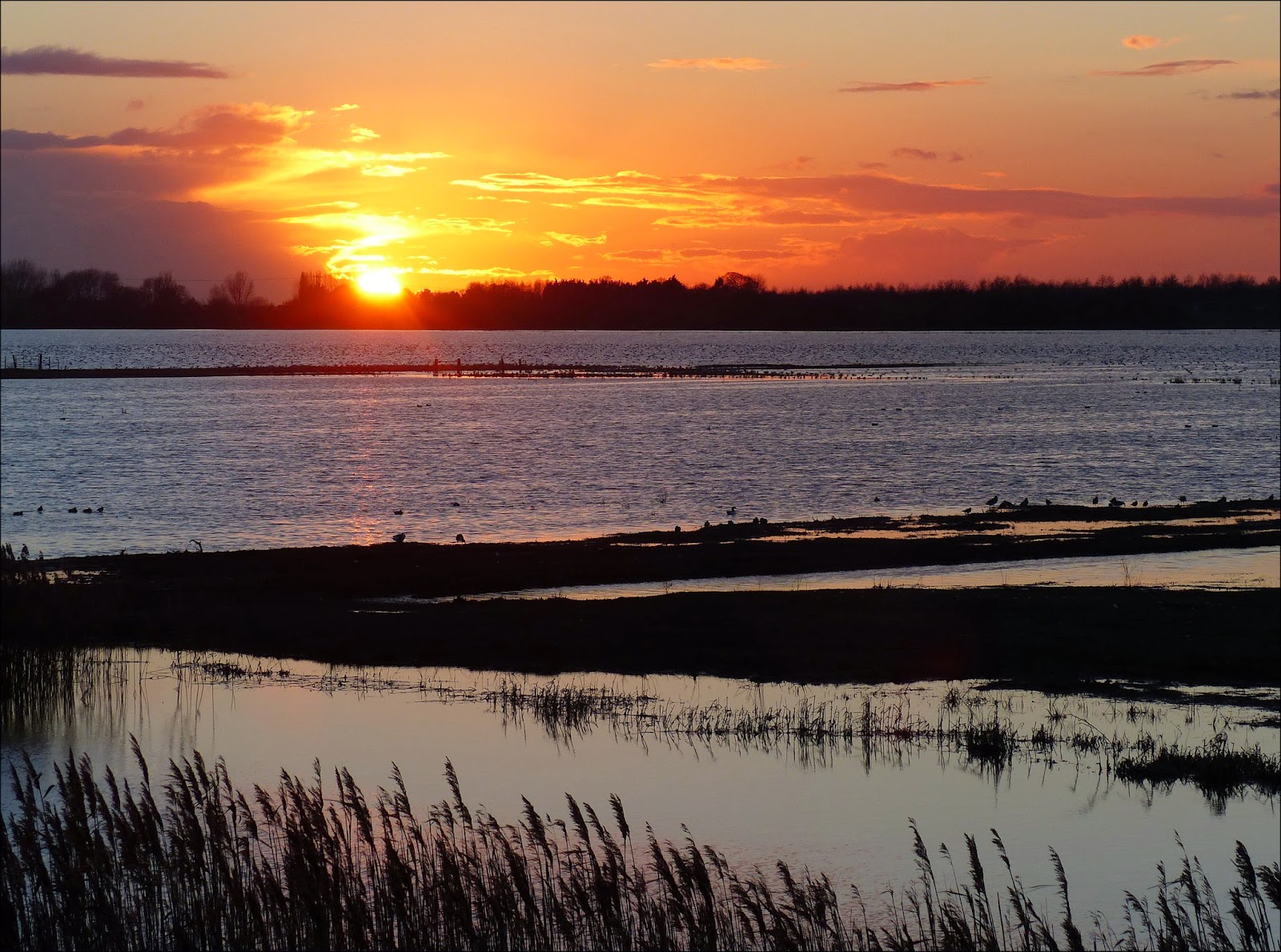 The sunset was stunning ...

... and the Shelduck were still going about their business. 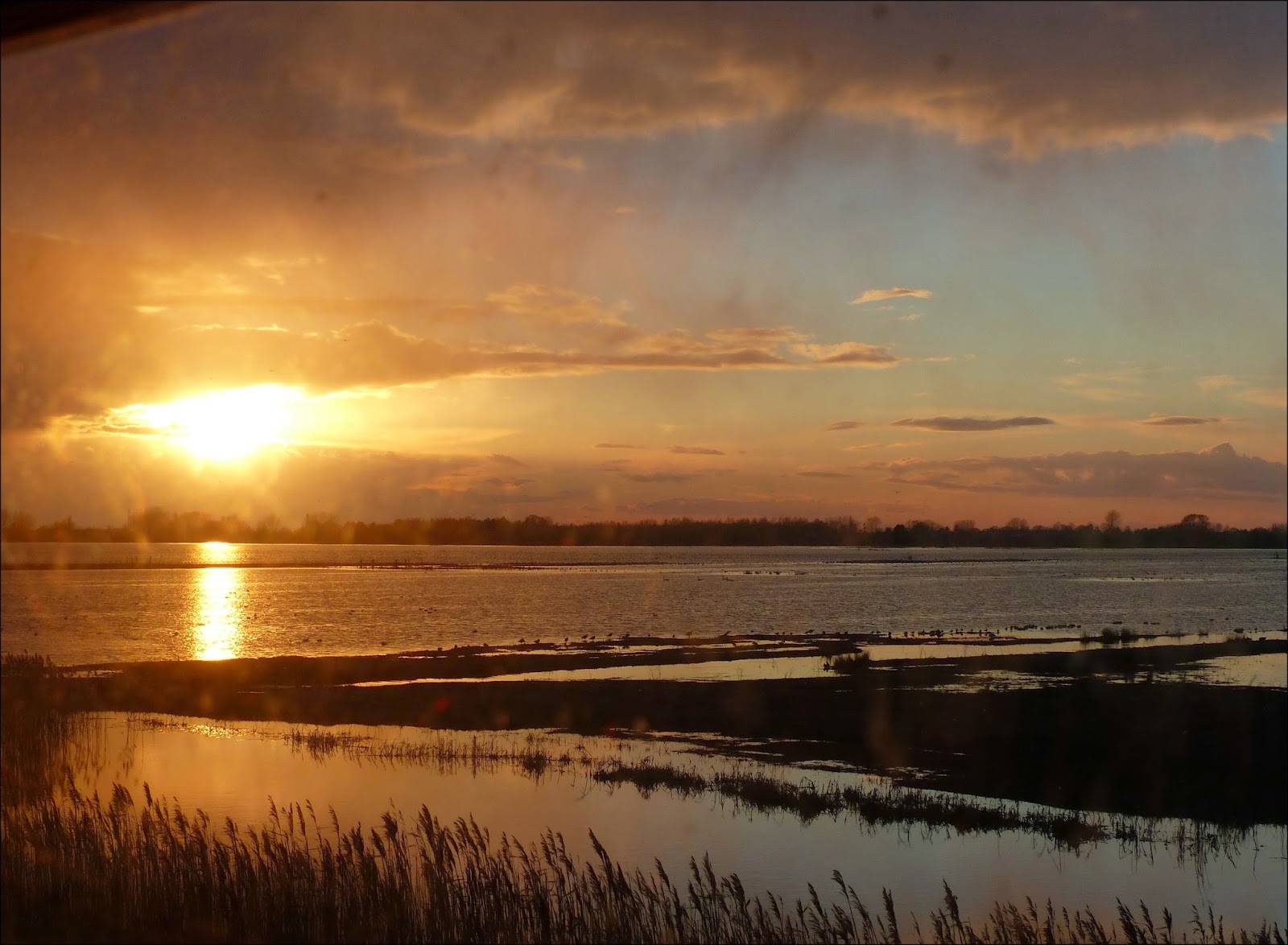 Welney - what a place! 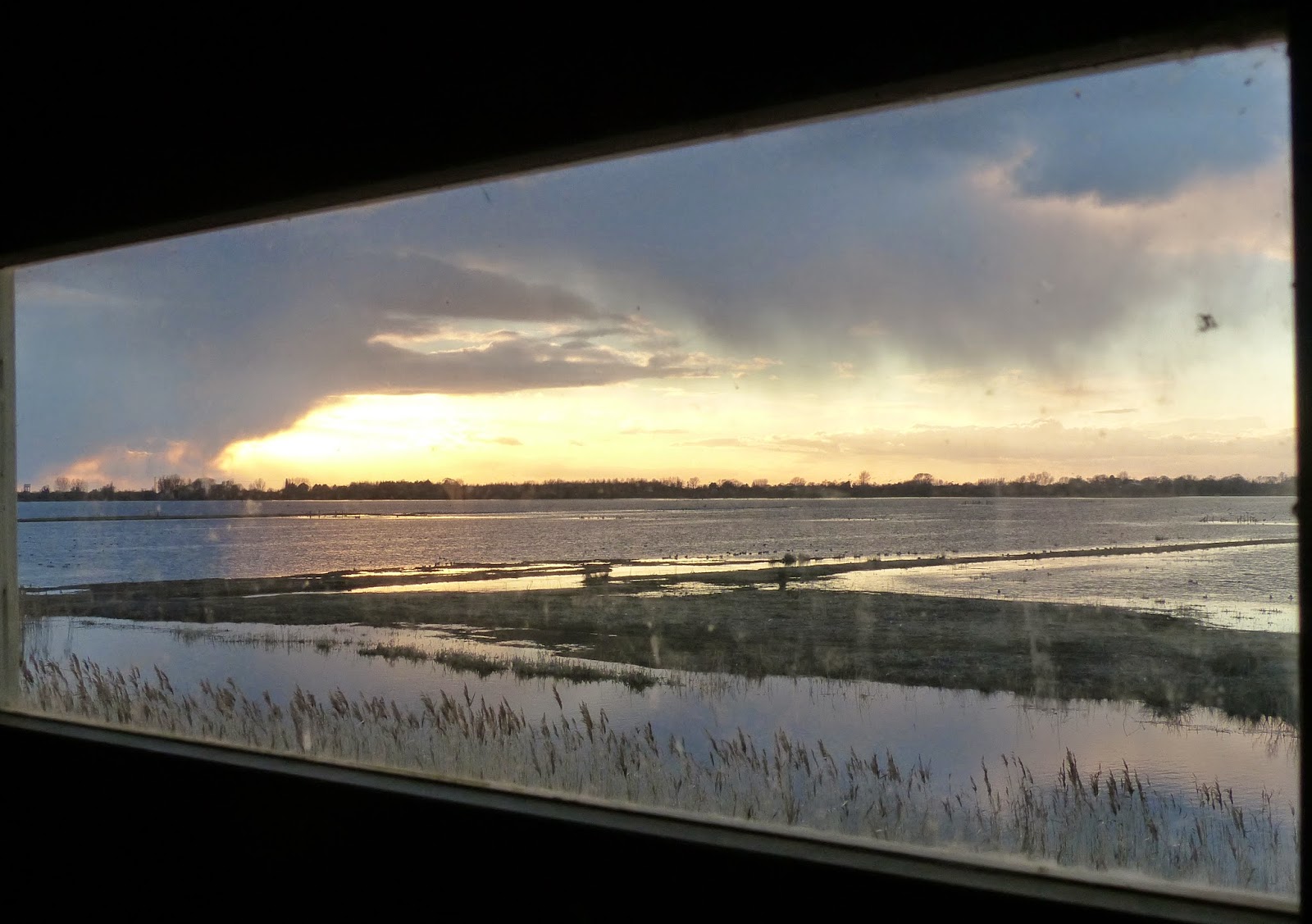 Every so often it got very stormy.
This was the view from the the hide
as the dark clouds tried to get the upper hand. 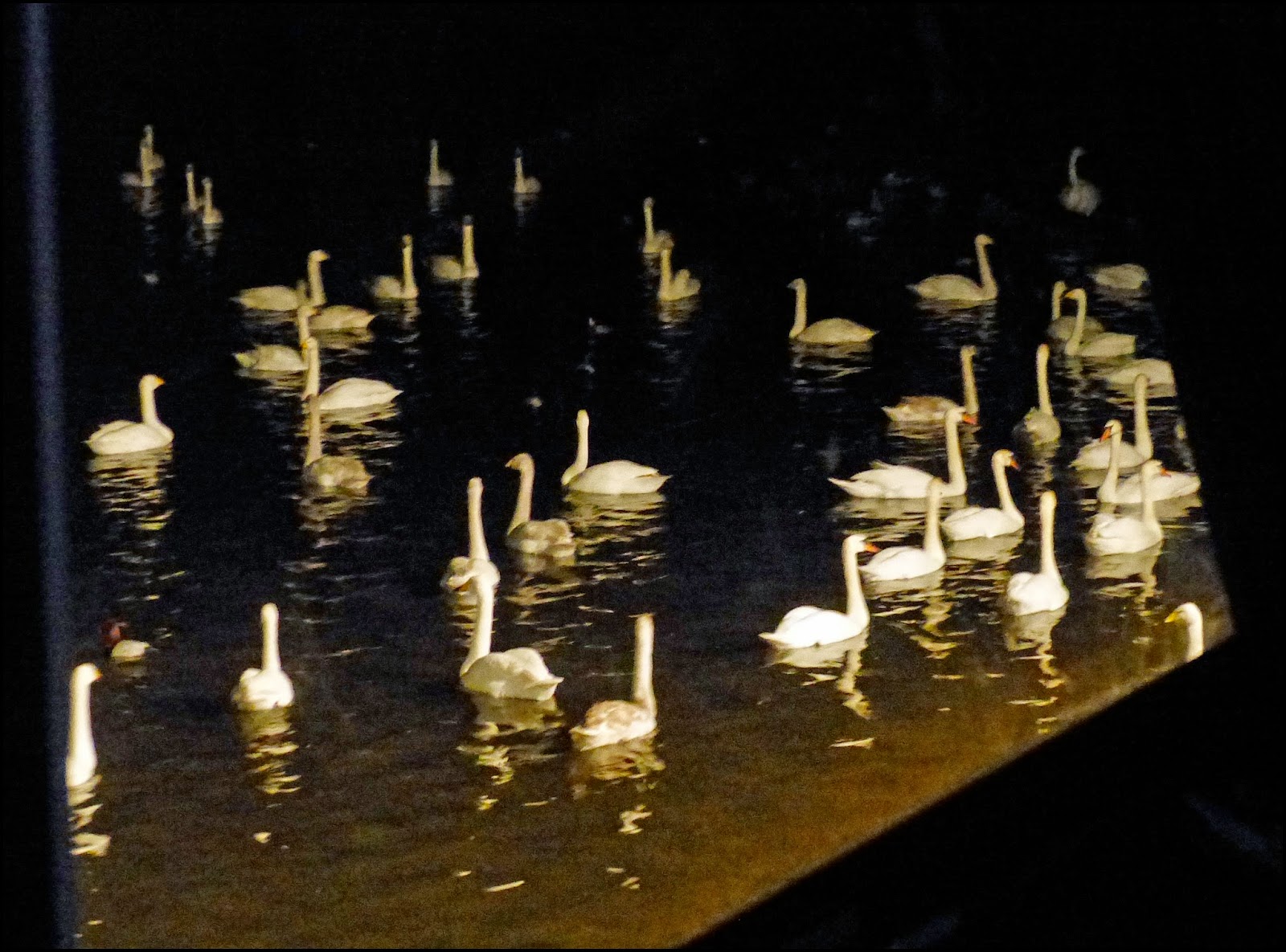 It was soon time
for the evening swan-feed ... 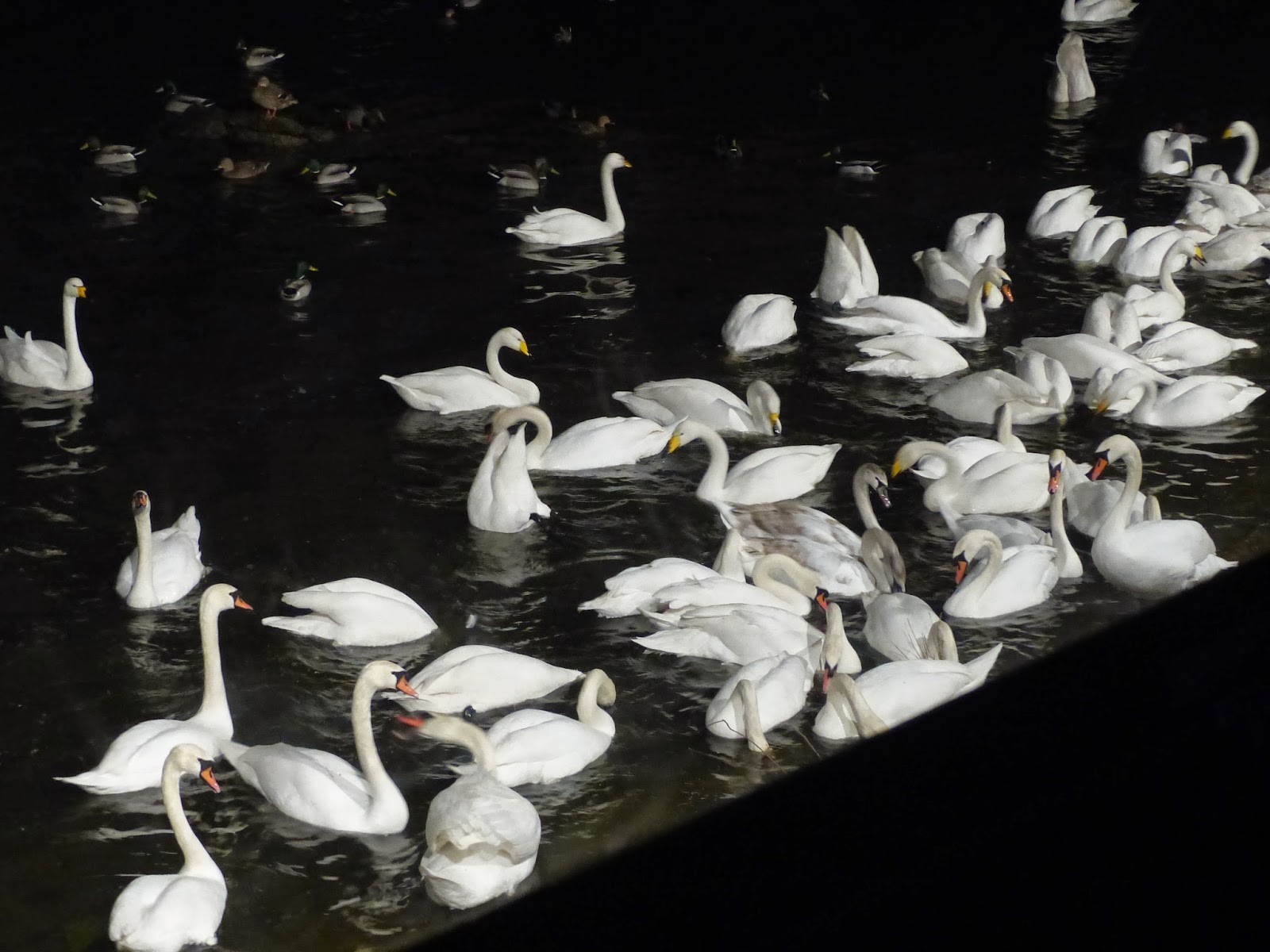 ... which was a popular event for birds and humans alike ... 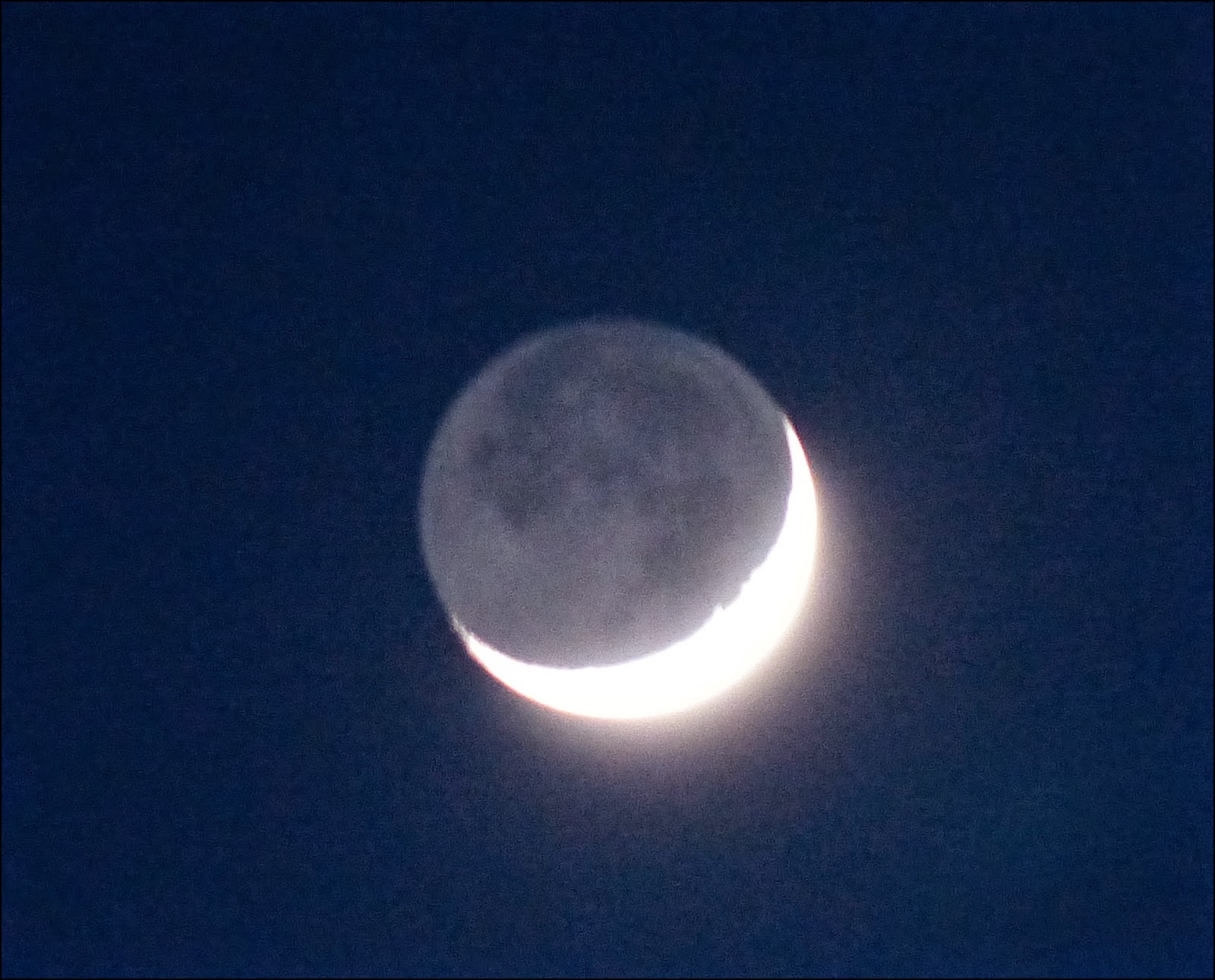 ... in bitter temperatures beneath the February moon.

Caroline, gorgeous captures of the swans, ducks and the lovely sunset. Wonderful sightings and post..

Wow, beautiful photos and I learned so much...this post is a read twice one!!
At first glance, I did miss the sparrow!! Wish I could have been there in person! Thanks so much for this post!

Very nice photos and post, Caroline! It must have been a delightful day. The mnemonics for the Whooper and Berwick are also quite helpful.

PS - a snowy egret flew onto our beach as I was writing this. That is a s close to swans as we get around here!

What a lovely series of photos, Caroline! I specially love the wigeon and the reed bunting.

PS, thank you for linking up and sharing your post.. Have a happy day and week ahead!

Looks like a great day Caroline and those sunset shots are epic.

Caroline, these images are wonderful. Particularly the swans. A favourite of everyone. You really captured the feeling weather wise. Thoroughly enjoyable look at your trip out

Great photos of the birds and sunset. Looks like you had a really great day out :)

What a lovely day out with lots to see, especially like you photos of the sun setting..
Amanda xx