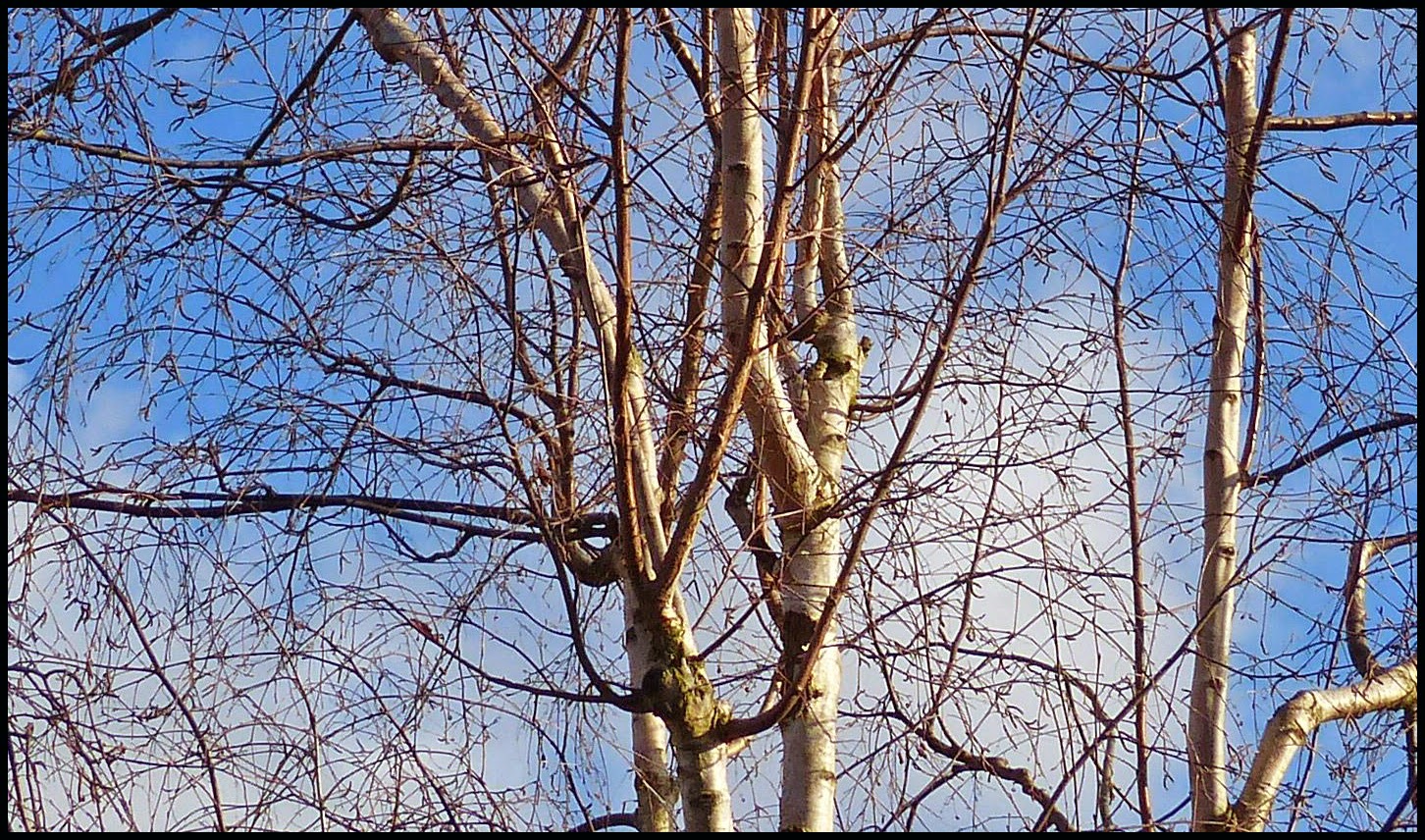 A Couple of Diary Entries

I had just walked around the garden in search of Snowdrops (but there aren't any yet) when a large form caught my eye, gliding above the Silver Birch. It was a Buzzard, and the first I have seen over my home patch. Down below, a Robin was feeding among the twigs under the coconut feeders that hand from the tree. A Song Thrush hopped into the frame. The two birds were quite unperturbed by each other's company: they were centimetres apart and yet - apparently - quite uninterested in what the other bird was doing.

I was reading Claxton by Mark Cocker (highly recommended) as I sipped my coffee on a cold January morning. The Long-tailed tits flitted between the Silver Birch branches outside, catching my eye every so often with their airborne antics in a bid to secure a morsel of fat from the coconut feeders. There was a sudden swoop and the Great Spotted Woodpecker flew in. The bird did not stay long on the coconut, but in the few seconds in which I had to admirer this striking creature, I noticed that there was no sign of red on the head or the nape of the neck. This convinces me that the bird is a female, so I'm hoping we may have a resident brood of young woodpeckers come the Spring. 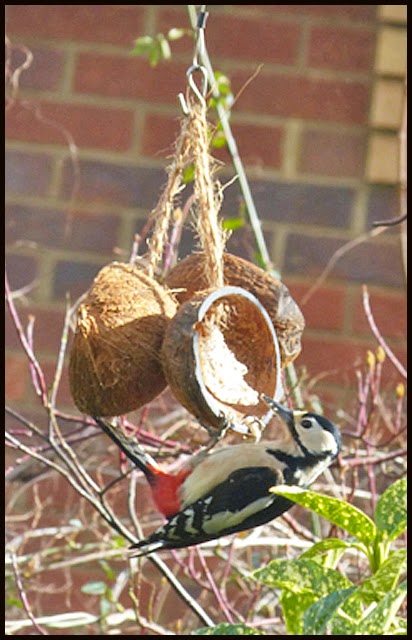 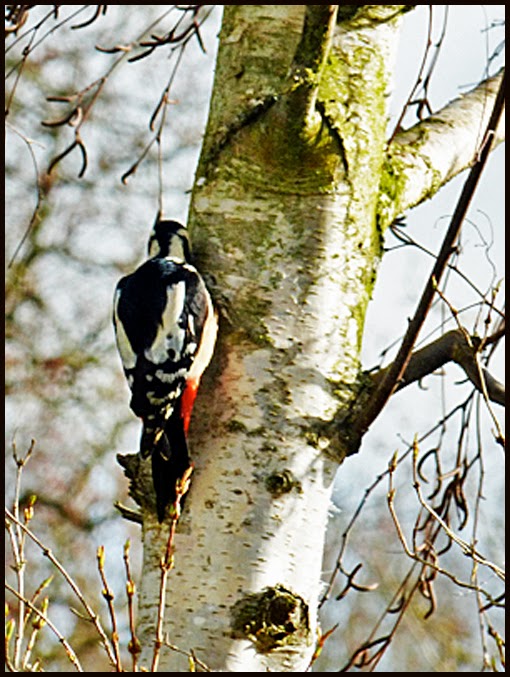 We have had some pretty cold weather with showers of large snowflakes, but very little lying snow to date. The cold weather has certainly driven more birds to the coconut feeders on the Silver Birch. The sky has been very dark at times, and I apologise for the quality of the photos. 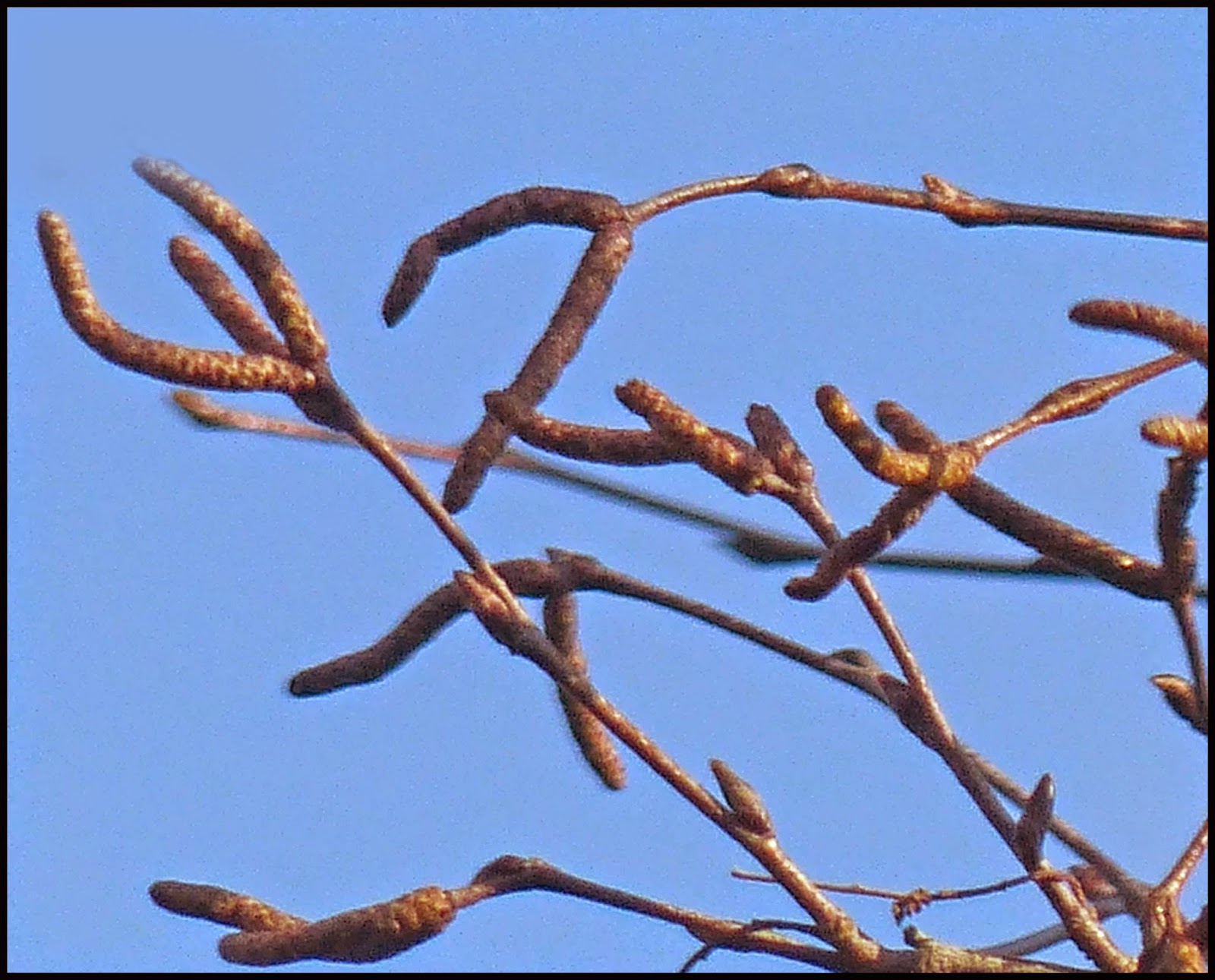 Last month I mentioned the 'forked twig-ends' (in inverted commas, as you see). These have grown and swollen considerably, and there are no prizes for noticing that they are birch catkins. The pollen will be released into the atmosphere in April. I am waiting for new green leaves to unfurl. 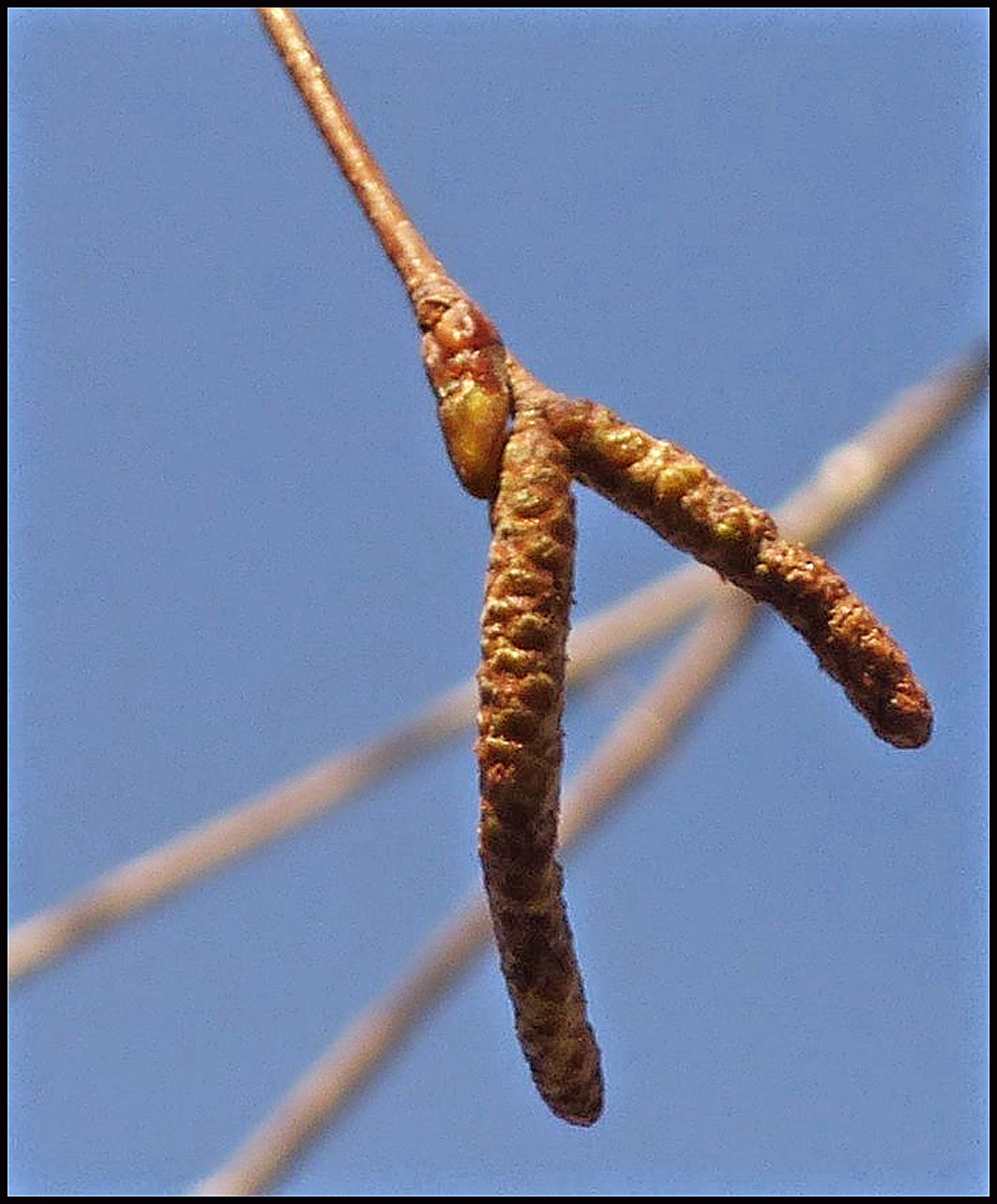 That's about it for this month. Next time I will post my updated list of species in, on, under and around the Silver Birch. Who knows, by then we may have had some avian migrants passing through. I keep scanning the bird forum posts (and twitter, of course) to see if there have been any local Waxwing sightings. Apparently there was one in the vicinity, but not close enough ...

Your bird population is fantastic.

When I went to see my new tree for following I got excited because, not knowing much about birds, I thought I could hear a woodpecker in it. But it turned out to be a crow or a jackdaw making clacking noises with its beak.

I love your photos and the way you've chosen to focus your post on the birds inhabiting your tree (& now looking forward to reading through all of your previous posts). I have Claxton on my 'to read' list so glad to hear you recommend it.
Catherine

Nice to see the birch in winter with all the critters....they seem to love it too!

Your post has made me yearn for a time when the trees in my garden will be mature enough to make some spectacular shots like yours.
Great post, you've a new follower here!

What a lovely tree. I love the bark. Your photos are beautiful.

Great bird photos, Caroline ... as usual. So neat to see the ones we don't have here.

Lovely tree, brilliant bird pictures!
I particularly like the long-tailed tits. I always find it very difficult to get a decent picture of them as they are so small and won't usually come as close to the house as some other birds.
All the best for 2015 :)