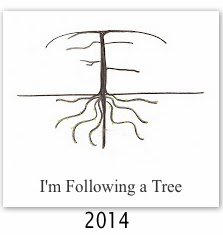 I have chosen a Silver Birch as my tree and will be taking part in the new project, 'I'm Following a Tree', run from the wonderful Loose and Leafy blog. If you would like to join in with a tree of your choice, you will find the contact details here and here. 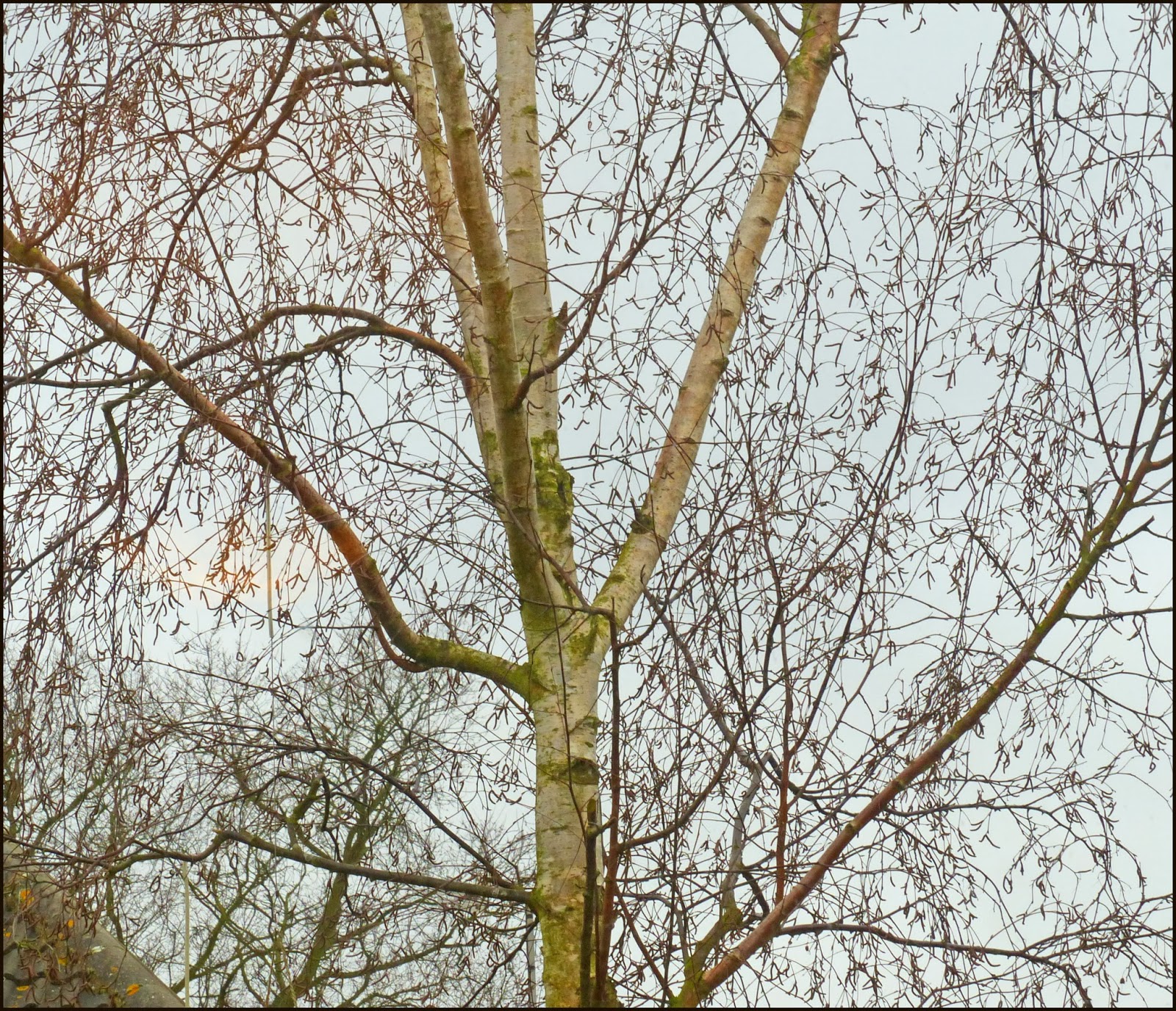 My tree is nothing very special in terms of outward appearance. It was probably part of a mass order of trees planted by contractors when new houses were built some twenty years ago. Since then it has been pruned back because space is limited. A bird feeder and a couple of fat-filled coconuts (one with mealworms) hang from the tree. 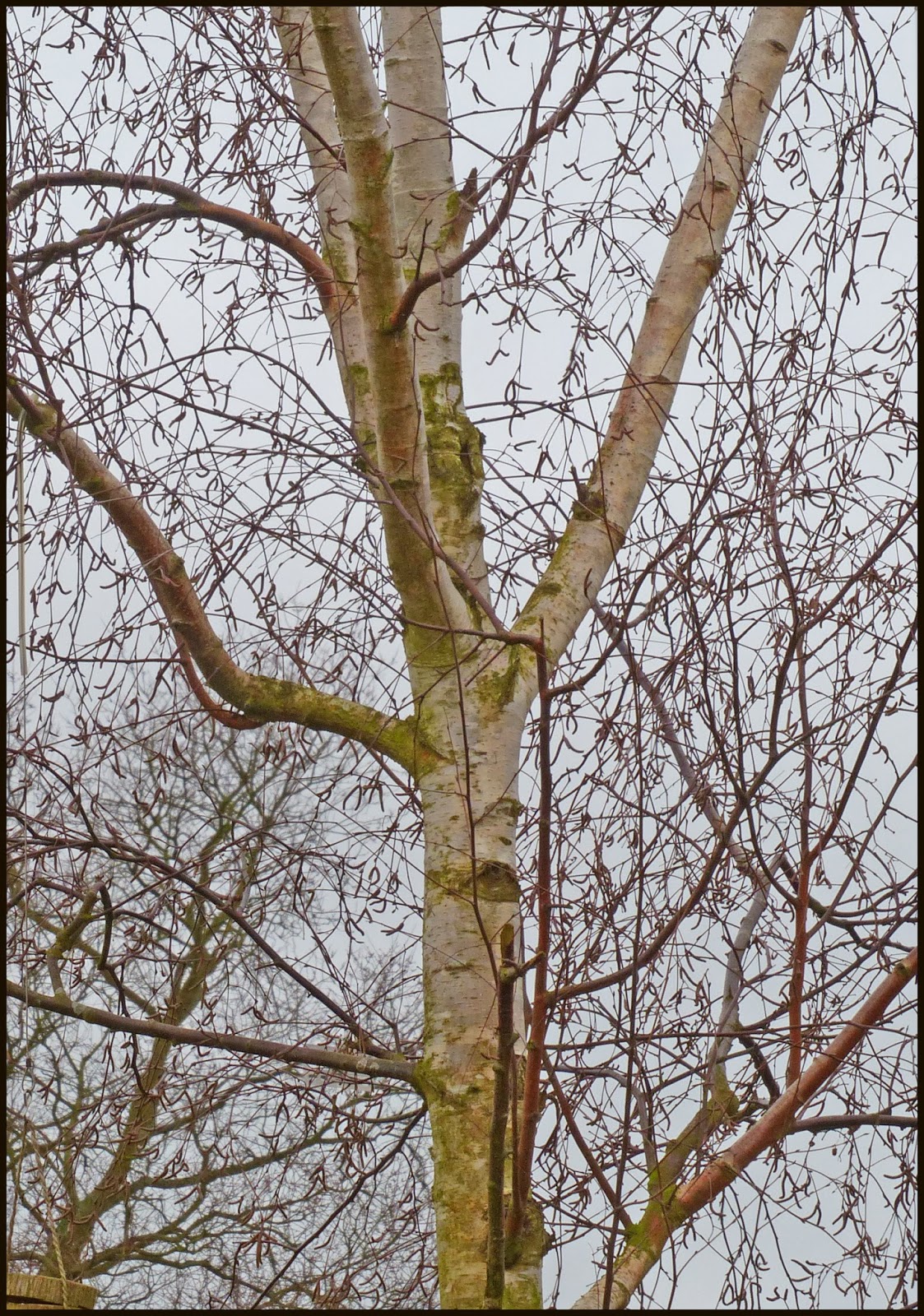 
All my posts linked to the project will be labelled 'Tree Following 2014'.

I took part in a similar project called 'The Tree Year' when I lived in Wales back in 2011, so know already just how rewarding these observational schemes can be!

I can't resist beginning this journey with the birds who visit this tree. I will give each species a number with the 'Tree Following' prefix, TF.

I watch these birds every day and find great enjoyment in observing their habits.

The Great Spotted Woodpecker is to my eye the most striking. She feeds on the fat-filled coconuts that dangle from the Silver Birch and has been known to perch on the tree itself. She is an occasional visitor, who comes with stealth when she feels no one is looking. The photos below were taken through my 'hide' of double-glazing!


This photo below was also taken through glass. You can see the catkins, which I will try to shoot again in better conditions.

This handsome little fellow (TF3) is a Long-tailed tit. I have never knowingly shared a home patch with these wonderful birds before. The Silver Birch is visited regularly by a blitz of five Long-tailed tits. The one in the photo was perching a metre away from the tree, preparing to fly towards the feeder. I am still trying to decide what constitutes a suitable 'boundary' for the purposes of this project.


I am aware of four Blackbirds, two male, two female, who perch on the tree and rootle around in the undergrowth. The one below is a male, with his yellow bill.


I have a regular (?Song) Thrush who loves the dead leaves at the base of the tree. It has a silver ring on its left leg, which you can probably make out in the photo below. A piece of bark had fallen off the feeder, and I guess it may have had some grubs on it or earthworms under it. I have seen a second Thrush, but these are shy birds and I have yet to photograph it.


The Bluetits have been particularly active in the spring sunshine. This one is surveying the scene among the catkins on the Silver Birch.


And next I come to the feisty Robins. Most of the birds perch of the coconuts to feed, but the Robins often flutter their wings frantically as they try to extract a piece of fat with their bills. I shall have to try to take a picture of the fluttering!


There are other visitors, such as the Magpies who bomb in at full speed, grab a mouthful of fat in their bills and retreat. There are also plenty of Wood Pigeons who come into the garden from larger trees in the local nature reserve nearby. They tend to huddle under the Silver Birch, waiting for the smaller birds to drop scraps on the leaf litter below.


Most of these photos were taken through glass. I hope that as the weather gets warmer and the birds get a little more used to my presence that I will be able to take photos outdoors. Meanwhile the first Bumblebee and Small Tortoiseshell Butterfly visited the garden yesterday and it will not be long before more insects appear.

I found the Grove - or Brown-Lipped Snail - in the photo above ambling along in the undergrowth. It is the first snail I have seen on the move this season. You can make out the distinctive brown lip. These snail shells come in a remarkable range of colour (yellow, pink, brown) and stripe design. Song Thrushes are particularly fond of these molluscs and demolish the shell on a thrush anvil (this link may take a second to 'settle' once clicked) which may be a favoured stone. The shell damage has possibly been caused by one of these birds, perhaps by TF5, the ringed Thrush above.

There are a few Snowdrops, which lie almost hidden in the undergrowth below the Silver Birch, close to an early Daisy that I noticed yesterday, heralding all the good spring things that lie ahead.

So much going on! Loads of detail. Fascinating. Glad you included the snail.

What a lovely idea, I took part in Tree Year the same year you did, Caroline, so maybe I should quickly choose a tree and take part in this?

Lovely selection of birds you have there. Looks to me like a song thrush, mistle thrushes tends to be greyer in colour. Though with its head at that odd angle it's more difficult to tell (mistle thrushes have a distinctively longer neck than song thrushes)

This was really interesting! I'll look forward to your posts. I should do this with one of the trees in my front yard, but I don't seem to do well with things like this and forget to do them. You have a nice variety of birds in your tree. I like those coconut feeders. Will have to try that.

Great post, I love the tree your chose. And beautiful variety of birds and photos. Have a happy weekend!

What a lovely tree to follow. I use coconut feeders as well and they certainly attract lots of birds. I'm looking forward to seeing the progress of your tree.

I just love your tree!
I am originally from Norway and one of the most common trees there is the silver birch. I have been living in London for the last 15 years and I haven’t really seen many birches around where I live, so your post was very nice. I used to have a 15m tall weeping silver birch in my old garden in Norway, I still miss it :-) I look forward to seeing how your birch changes as it gets leaves.

Wonderful, I love silver birches, and yours is clearly host to a wide range of birds and other critters, great choice!

I love silver birches. They light up our hill when the sun shines on wet winter bark.

Your bird photos are stunning, especially the GSW.

Hi Caroline, I found your post really interesting, especially the pictures of birds. I also have a large silver birch at the bottom of the garden. They are so beautiful. I have resolved to get some of those fat filled coconuts and hang them at the bottom of the garden away from the house to see if I can attract some of the shyer birds. Thanks also for visiting my tree.

The silver Birch photos are lovely. Wow, I can hardly believe how many birds have already arrived in your garden and has visited your tree....Very Lovely birds indeed. Hugs Judy

Caroline I love your birds especially the woodpecker. And flowers. I won't see a daisy before May as we are due for more snow this week.

Caroline, I believe this is the same kind of tree that I followed last year! We call it weeping birch (Betula pendula) but I read that it's known as silver birch elsewhere. It's not native here, but is a popular landscape tree in colder places. Like yours, this one grows outside my window, also double glazed :)

I especially like your broad approach to tree-following (e.g. all the birds) and look forward to news through the year.

A birch is a wonderful tree to follow, it is interesting all year round. Yours is a lovely one. And you have so many birds enjoying it. The long tailed tits often visit mine and spend ages on it. Do you know what they are looking for on a birch?
I look forward to watching your tree as it comes into leaf.

What a great set of photos. Thus us an impressive post. I've always liked silver birch.

What fantastic photographs! You have a wonderful variety of birds visiting your garden. I'm looking forward to reading about your tree, and to seeing whether we come up with similar observations!

What fantastic photographs! You have a wonderful variety of birds visiting your garden. I am very much looking forward to reading about your tree and seeing whether we come up with similar observations!