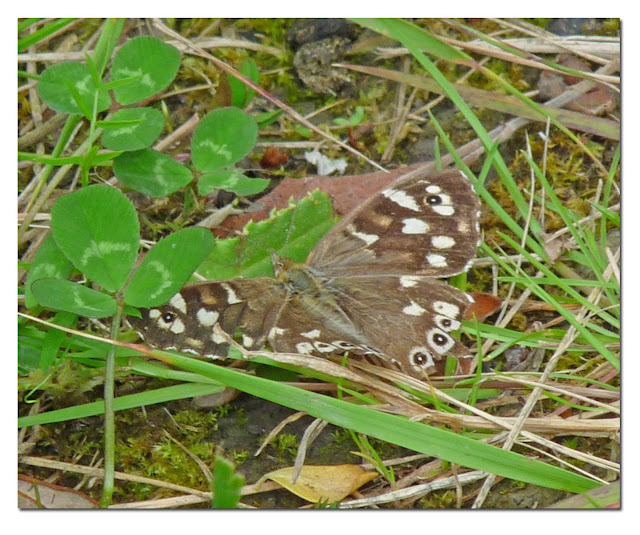 I have seen so few butterflies this year, but this Speckled Wood (Pararge aegeria) was hard to miss at Wicken Fen, despite its camouflage markings, as it was flitting around the shady areas with great vigour. Then, much to my surprise, it came to rest at close proximity to my feet, so I took a quick photo. The buttrerfly is a bit ragged around the wing, but its flying power certainly seemed unaffected!

It was good to see a single butterfly, but take a look here to see how many species the Reserve boasts. I guess the windy conditions accounted for our tiny tally as much as anything. Roll on the summer ... but then perhaps this is 'normal' Wimbledon fortnight weather!

Last week, incidentally, was National Insect Week. I only found out rather late in the day.
Posted by Caroline Gill at 12:54

That butterfly is rather big Caroline. My butterfly post, the Idea leuconoe, is also big, however it might not be seen in the temperate climes.

Caroline!
Hi We are very happy with the distant Polish!
Do you run a fantastic and interesting blog.
Your photos are very beautiful and interesting.
I am delighted with them.
I will be happy to admire your next posts.
Lucy-Maria

not many butterflies in edinburgh this summer either, but plenty up in Assynt! (I'm just about to post about them!)