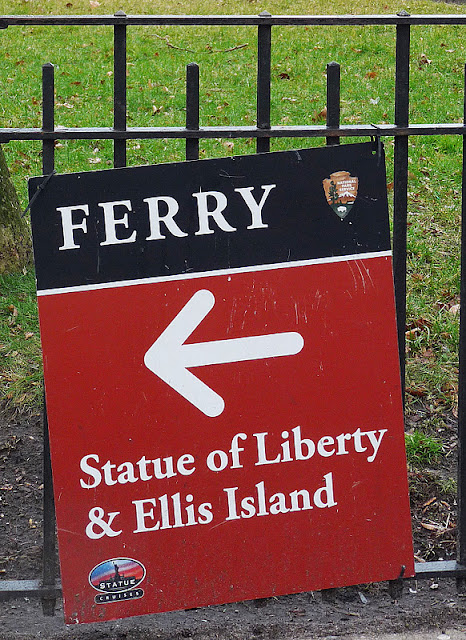 It seems almost unbelievable that three weeks ago we were preparing for what looked as if it was going to be a very stormy crossing from the embarkation point of Castle Clinton on the Battery Wall in Manhattan to New York's Liberty Island, which rises out of the vast river Hudson. However, the ferry was large and pretty stable, and we soon found our sea-legs. Of course, it was only a short crossing, but I didn't realise that at the time! The weather turned bitter, and with the added wind chill factor, I have rarely felt so cold. 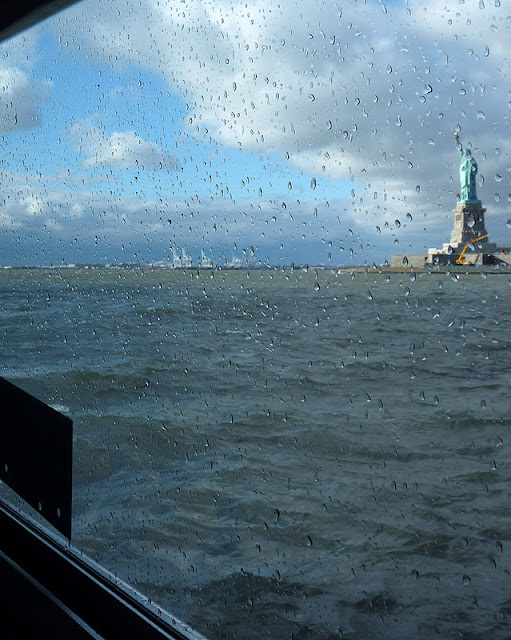 I soon had my first glimpse of the iconic Statue of Liberty from the windows of our ferry, the Miss Ellis Island. 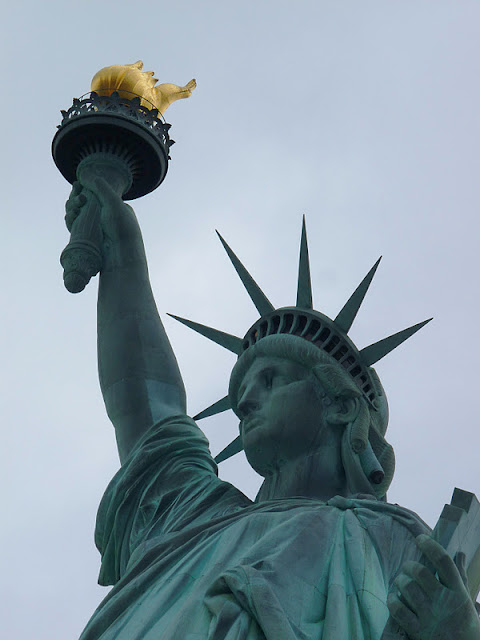 The statue grew nearer and it was not long before we were disembarking. 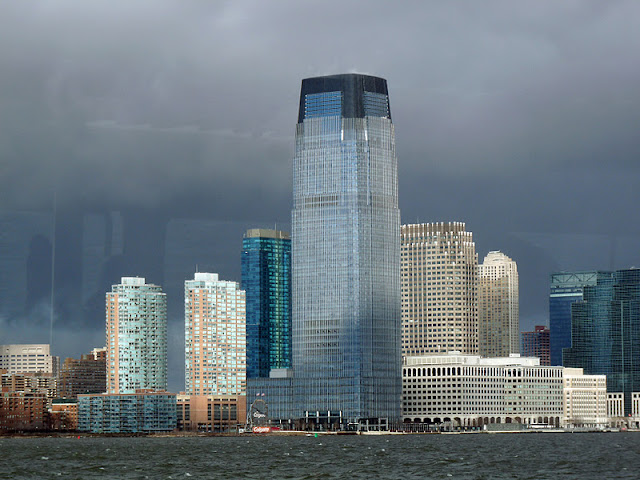 This was the view looking back towards Manhattan. You can see from the reflections that this photo was actually taken from inside the ferry on our return voyage, but it was pretty much the view we saw from the island. 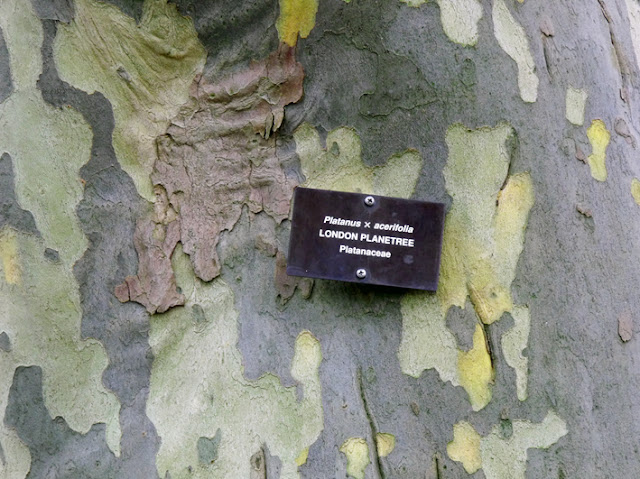 We just managed to brave the elements long enough to allow ourselves to circumnavigate the path around the island. I had particularly wanted to keep an eye out for any wildlife, thinking that perhaps I might see something other than the pigeons we had encountered everywhere in New York. The elegant London planetrees provided something approaching a less concrete and more natural environment. The patterned bark was quite beautiful, but it was far too cold to hang about for long ... 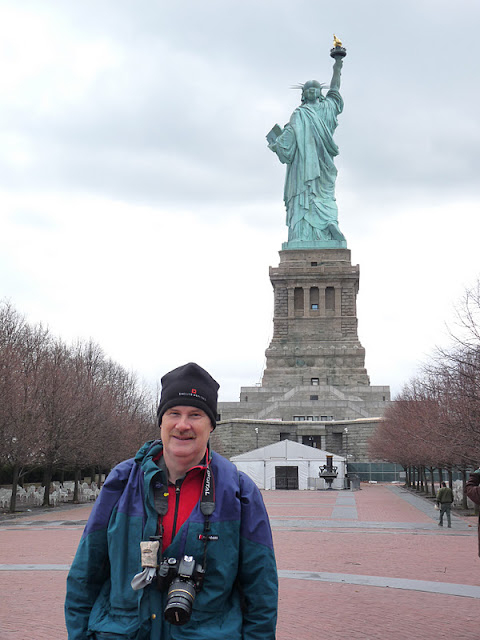 ... though David stood still just long enough for me to take his photo! 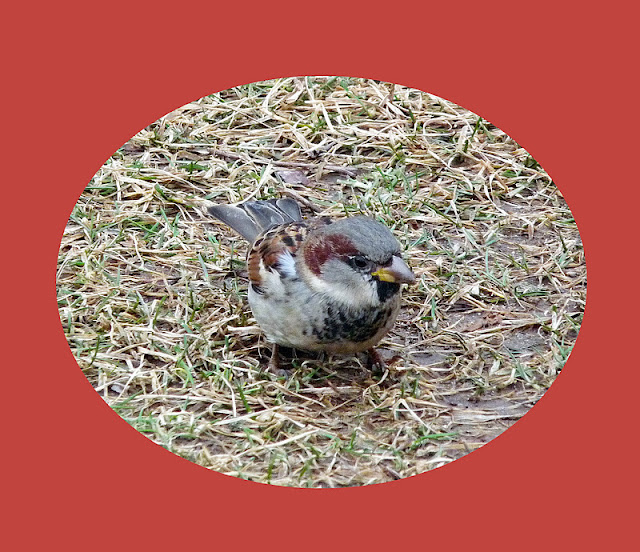 There were a few Sparrows scrabbling about in the freezing earth under the plane trees ... 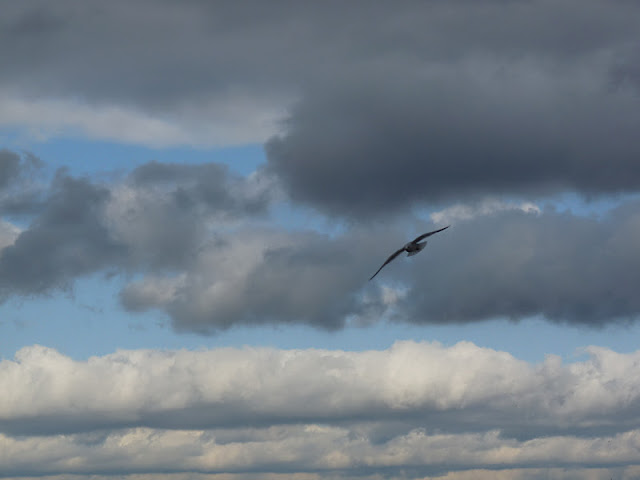 ... and the occasional gull flew past against a storm-laden sky. It was not long before large flakes started to fall on the statue. 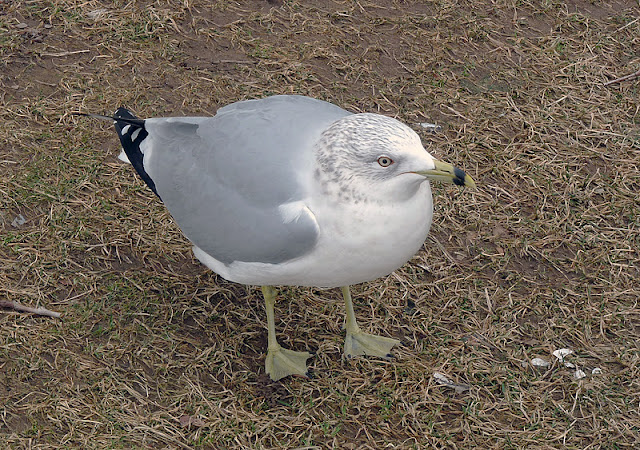 This gull had landed and was looking hopefully in our direction . . .

[P.S. My thanks to Jeremy of Jeremy Inglis Photography for his ID of Ring-billed Gull, Larus delawarensis. A 'first' for me Curiously, I note that there was a sighting of single Ring-billed at Essex, my adjoining county, yesterday!]. 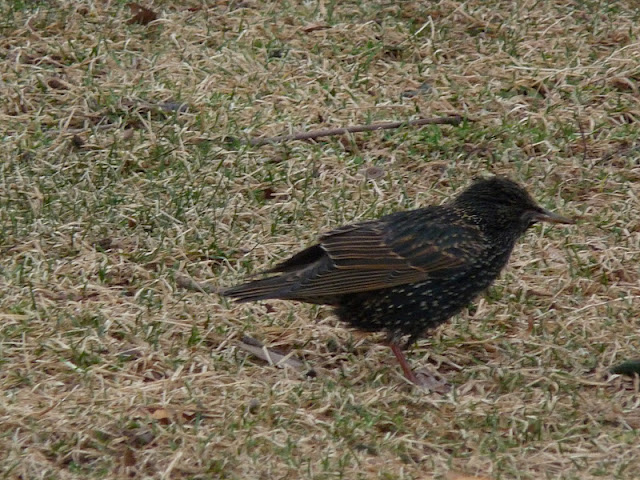 . . . while a Starling hopped about from foot to foot.

We may not have seen any very exciting wildlife on this particular excursion, but we enjoyed looking. Liberty Island was known as Bedloe's Island in a previous existence. It was originally part of the Oyster Islands, and is cared for these days by the National Park Service. It has been a smallpox station in its time and has apparently also been home to huge populations of 'English rabbits'.

Incidentally, anyone who has watched Earthflight will have seen the (trained) Snow Geese doing their fly-past above the Statue of Liberty (you can watch them here for the next 3 days). I understand that huge bird migrations can be seen from this vantage point at certain times of the year.

And finally . . . for anyone who is interested, this is what really took us out to the USA! You can see David with his Award if you scroll down.
Posted by Caroline Gill at 22:51

Really nice photo day to see the statue. David makes it look pretty small don't you think. I have never seen it up close. Then again only been to NY a few times. Welcome to America, your papers please?

Lovely shots from what must have been a memorable trip. Particularly like the view of the Statue of Liberty through the rain-splattered windows. I think that's a Ring-billed Gull - apparently they turn up at Blackpill occasionally!

Lovely photos, looks like you had a great time!

Thank you for sharing your photos. We saw the statue from the plane a few years back but we boarded a plane to travel on to Maine. You have some great shots here.

Wow Caroline - send my congratulations to David. You certainly had a good time I'm sure despite the cold.