There have been a lot of Cormorants on the Waterfront at Ipswich these last few days. The weather was overcast and grey (probably snow-laden) when I took these shots from a distance, but I rather like the silhouettes.

I had not realised that due to a lack of sea water fish, many Cormorants in Suffolk are apparently moving inland and finding food in freshwater habitats. 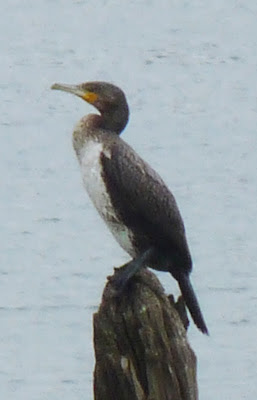 Great captures, I like seeing the cormorants with their wings wide open. The birds seem to be able to find their food. Great photos.

I remember seeing a group of these birds on the Atlantic ocean next to Maine. The adults were taking their young out for a swim and feed.

Much to the fisherman's disgust I'm sure. Looks nice in Ipswich, not somewhere I've ever been.