I posted the above photo on our return from Pylos in the Peloponnese last autumn, having failed in my attempts at identification. The creature was seriously 'on the move' so it was a case of click or miss, hence the fuzzy photo.

The identification continued to puzzle me until earlier this week Shelly from MOBugs (Missouri, USA) came to my rescue. A friend of hers was able to tell me that the creature is the nymph of a Seed Bug, the Spilostethus pandurus. It is more commonly known as the Milkweed Bug and belongs to the order of Hemiptera, sub-order of Heteroptera - and is from the family of Lygaeidae.

You can read about the hemimetabolic life cycle here. It certainly had not occurred to me that I was watching a nymph. There is a much better photograph by Normand Mlaure (you may have to scroll down), and there is another here, with only one ring i.e. an 0 rather than a figure of 8, on its back. There is further example here, with a cluster two photos down (by John Cravatta) of the not dissimilar Oxycarenus lavaterae.

For another cluster of these creatures (this time in Spain and taken by fturmog), take a look here. They have also been seen in the Algarve in Portugal.


*
We saw some other colourful creatures in Greece. You may remember these two from my previous Bug post . . . 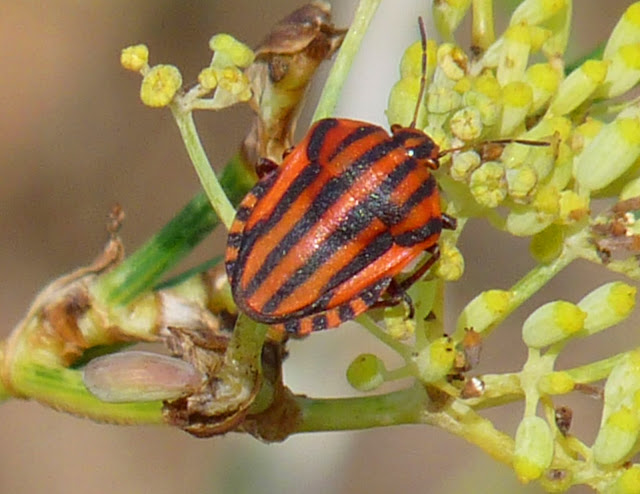 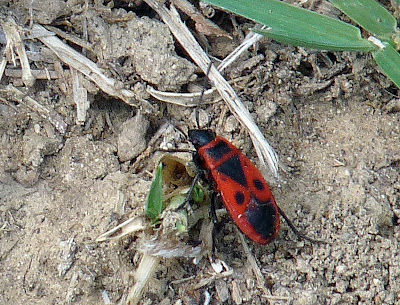 love to watch the milkweed bug crawling along a milkweed. they always look to be in a hurry.

the oystercatchers (pics below) and the swans are great captures. i'd love to get some swan pics one day. hope all is well.