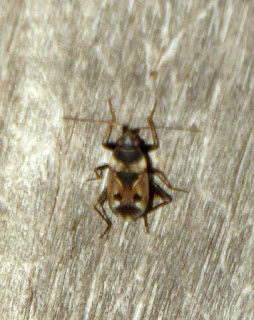 I found this tiny insect (sorry about poor record shot) on a wooden post in the garden a few days ago. The kind folk on iSpot and one of the local wildlife Facebook groups have helped me identify it as Rhyparochromus vulgaris, though there is a similar species, Rhyparochromus pini. Ironically for an insect climbing up a post, the Rhyparochromus is a Ground Bug. Apparently the species has not been in the UK for many years.

I had thought initially that it was perhaps a Fire bug (see one here, if you scroll down) in an early stage of development as we come across these colourful insects in the summer, but it is clearly something else altogether, and a new species for my garden list. A further species that is similar in appearance is the Raglius alboacuminatus, which you can read about here.

An interesting little bug Caroline. It is amazing what you can find in the garden when you look closely.

What a pretty bug! It reminds me of a species that seems to be quite common in parts of Edinburgh later in the year (though different colours). Exciting t find something that hasn't been seen in the Uk for many years!

Thank you both for your kind comments. And just to clarify, CGP, my understanding is that this is not an old UK species that has recently reappeared but that it is a species that has not been in the UK for very long...