We returned from North Norfolk a couple of days ago after a glorious time around the coast. There is so much wildlife in the area: we counted 45+ species of bird and had several encounters with animals. It was good to see a few insects emerging. I took (too) many photos so will save some for the next post. As you can see, the weather was bright at times, though often chilly. The National Trust photo here gives a good impression of the landscape.


The Norfolk Wildlife Trust centre at Cley is always a favourite destination. The sea is just beyond the ridge.


The North Norfolk skyline is peppered with towers, spires and masts. 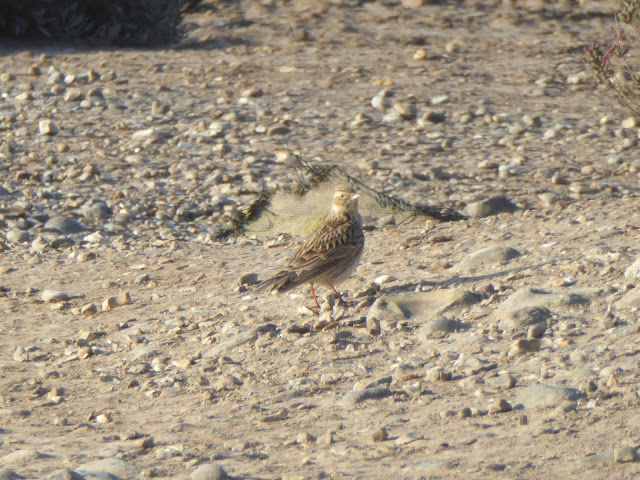 The light may be intoxicating at times but the soundscape is compelling, too. We enjoyed the heady mix of Skylark song, Oystercatcher calls and the occasional Curlew.


There were plenty of waders in the mudflats, including Redshank.


The blue building in the distance is the Blakeney Point Visitor Centre...


Once again, a good zoom was needed; but my record shot shows the Watch House, which had previous lives as a Customs and Excise lookout (yes, there was smuggling activity along this coast) and later as an official coastguard station. 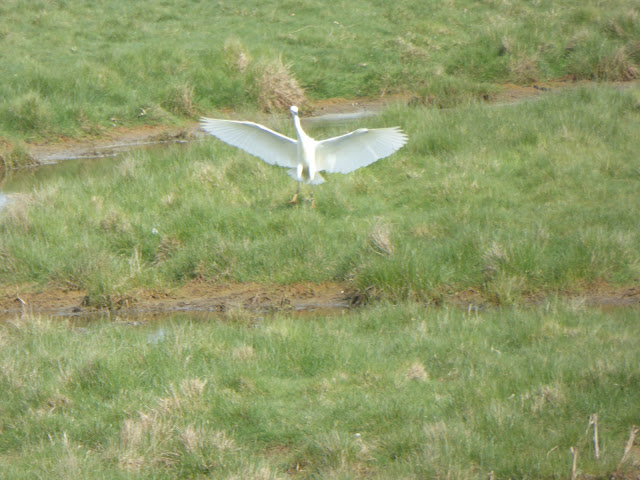 Back in Cley, just along the coast, there were good numbers of Little Egrets. I recall seeing these birds for the first time some 26 years ago when we first arrived in Swansea. I believe (if my memory serves me correctly) that they were all or mostly migrant visitors at that stage. These days many of them breed in the UK and live here all year round. 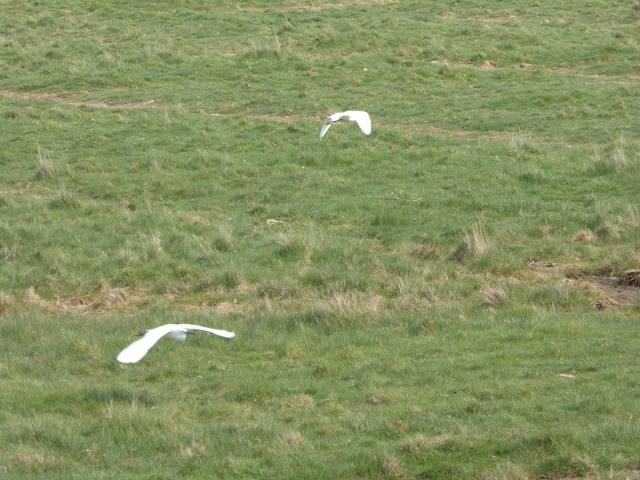 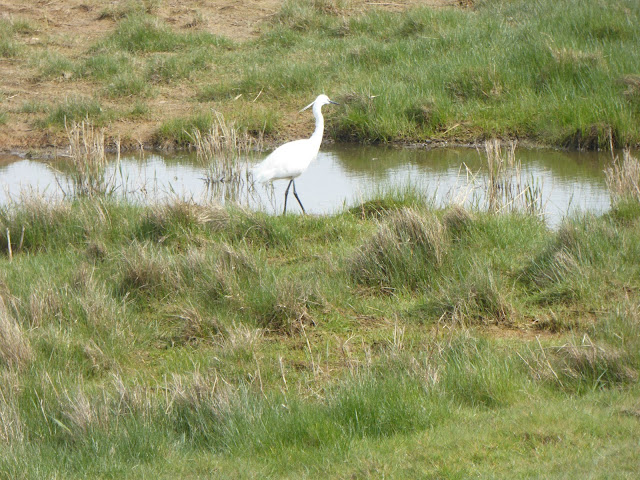 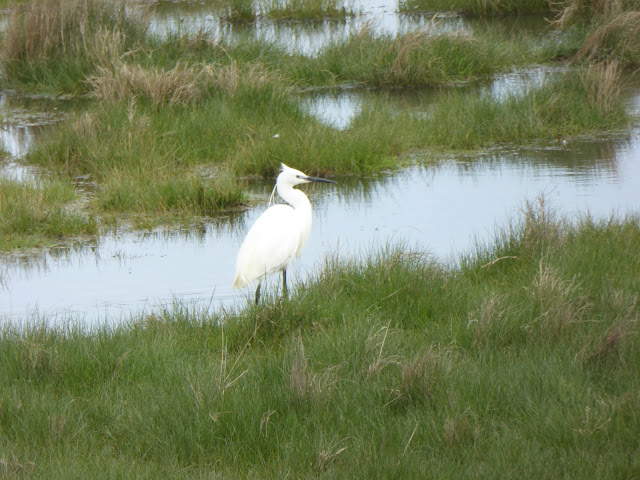 It is always hard to drag oneself away from the Cley area, but we had other sites on our agenda, including a first visit to the Norfolk Wildlife Trust site of Holme Dunes, along the coast in a westerly direction. This beautiful coastline hugs the Wash, and is wild, windswept and a very fragile environment.

You can see the attempts to slow down the effects of coastal erosion... 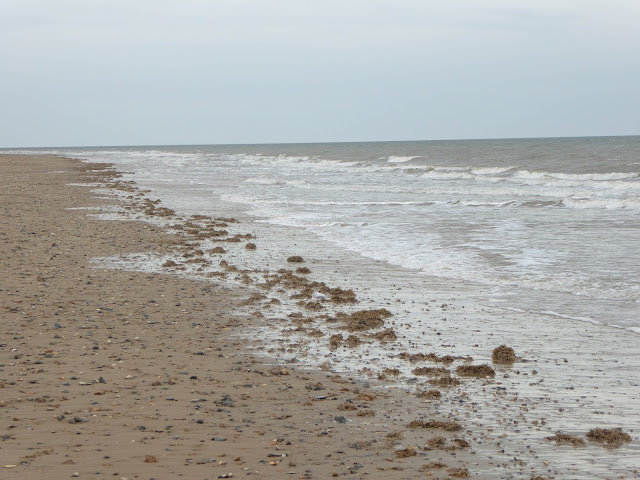 ... and although this could hardly be a more different setting, I was reminded of that evocative line by Keats in Ozymandias,

'the lone and level sands stretch far away...' 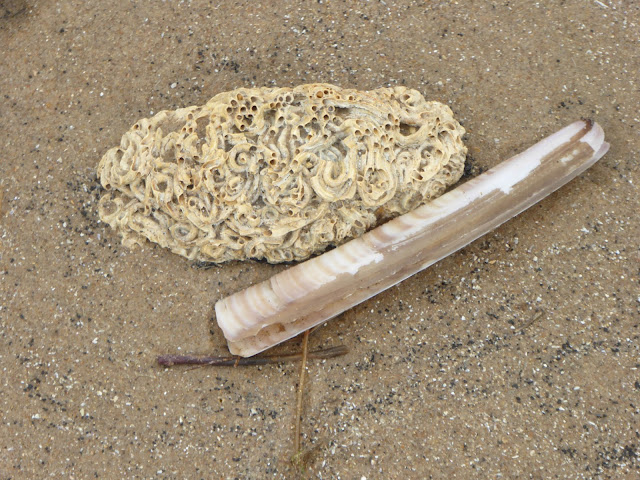 We saw a few Ringed Plovers on the beach, and plenty of evidence of bird life in the empty shells that were scattered along the tideline.

The photo above fails to do justice to a remarkable boardwalk, but you can just make out the ridge on which it stands. David is looking east towards Burnham Overy and Brancaster (with its Saxon Shore fort remains). The Wash is away to his left. 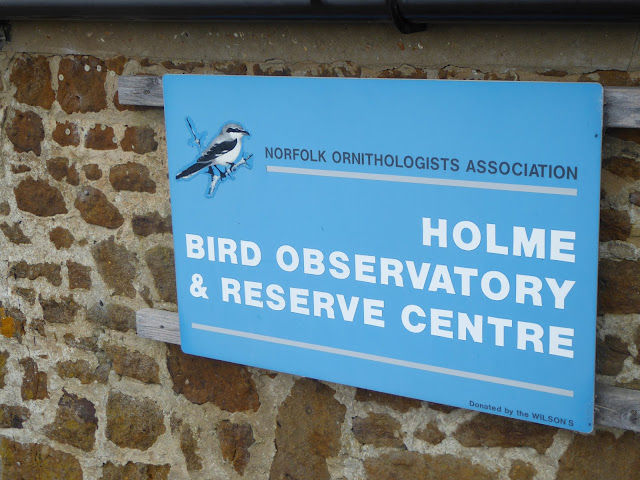 To our surprise and delight, we found a reserve within a reserve, and we enjoyed visiting the NOA hides and looking at the ringing nets. There were charms of Goldfinches in the trees, and quite a few Linnets, too. There were Pink-footed Geese nestling in the grassy areas - and a few Lapwing doing their aerial acrobatics.


I mentioned insects, and there were plenty of these strange black ones in the air. It must have been their time for hatching out. I will try and get an identification. We saw them at Cley and Holme. 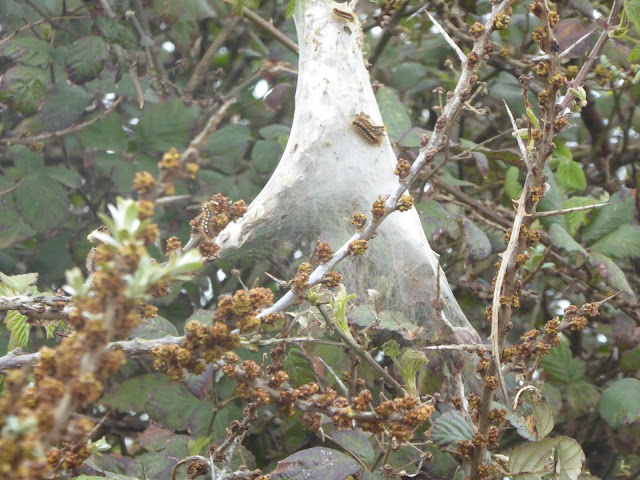 As we left the nature reserves at Holme we noticed a number of caterpillar tents. They are aleways interesting to see. 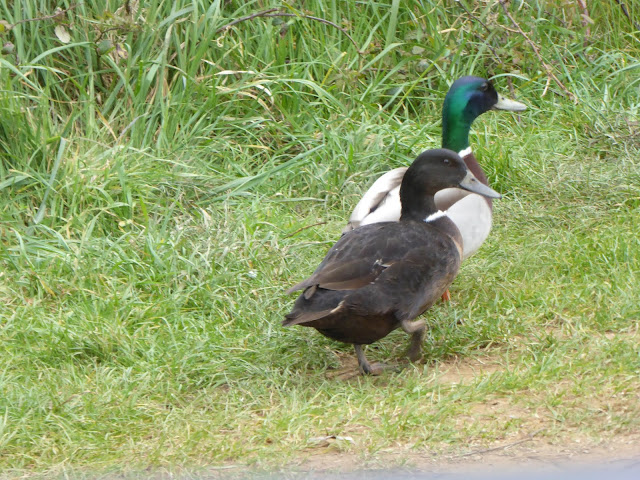 We encountered this unusual pair of Mallards at the approach to the beach in Snettisham, another excellent birding spot on The Wash. Mallards, of course, are renowned for their hybridising partnerships (and are sometimes known as 'manky Mallards'), so perhaps these ducks were not so unusual after all. 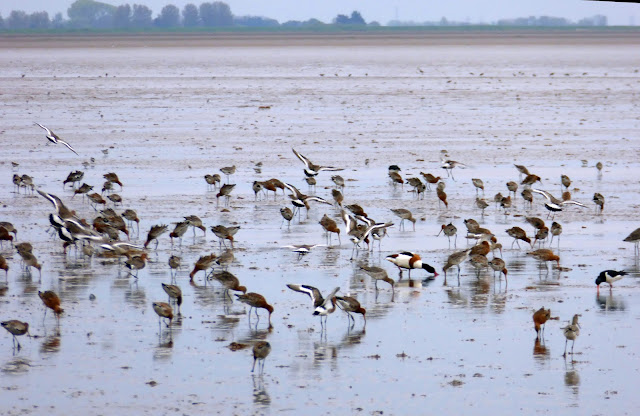 We knew that Snettisham was a good place for waders,
and as you can see, we were not disappointed. 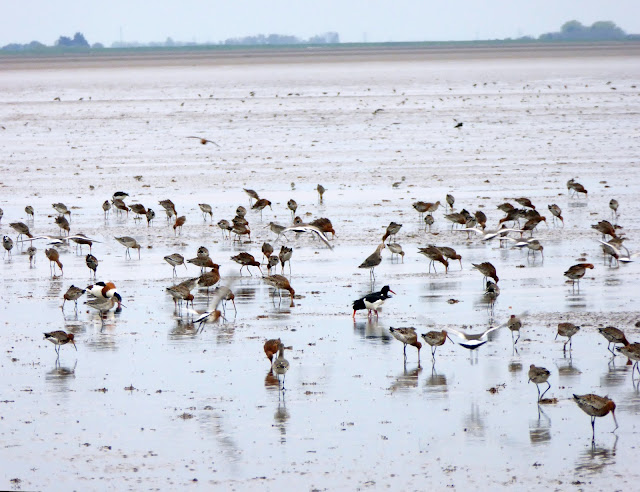 There were also a few Shelduck and Oystercatchers around. 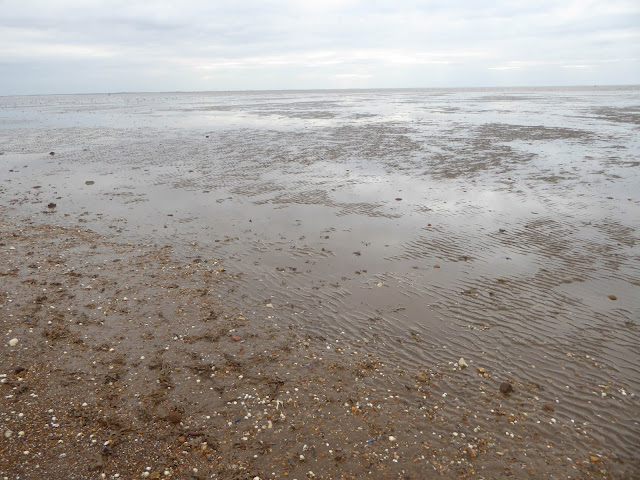 You can see the vast mudflats around this part of The Wash. From Holme we thought we caught a glimpse of the famous 'Boston Stump' across the vast expanse of water. 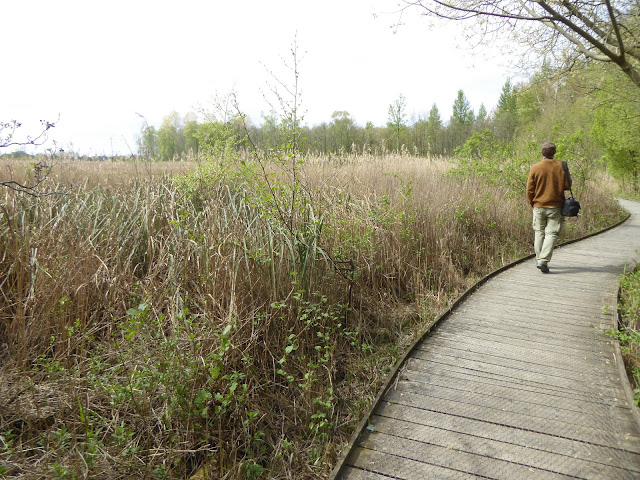 Folk at the RSPB Wildlife Fair in Norfolk last year had recommended the Hawk and Owl Trust reserve at Sculthorpe Moor, so we felt it was time to pay it a visit. The boardwalks were long and well maintained. 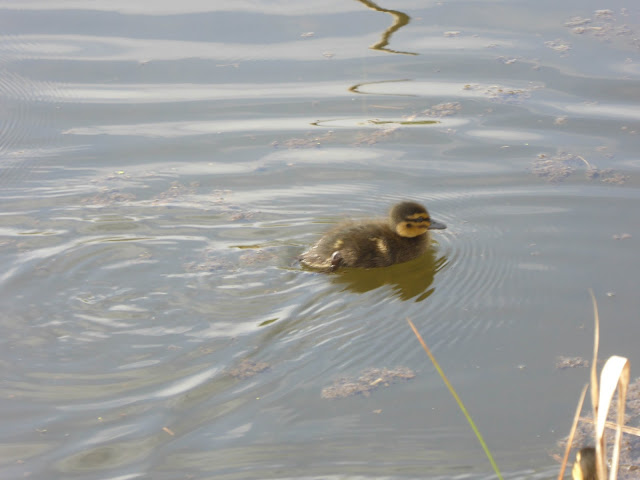 There were signs of spring everywhere, including out on the water. This was one of a clutch of nine Mallard ducklings. 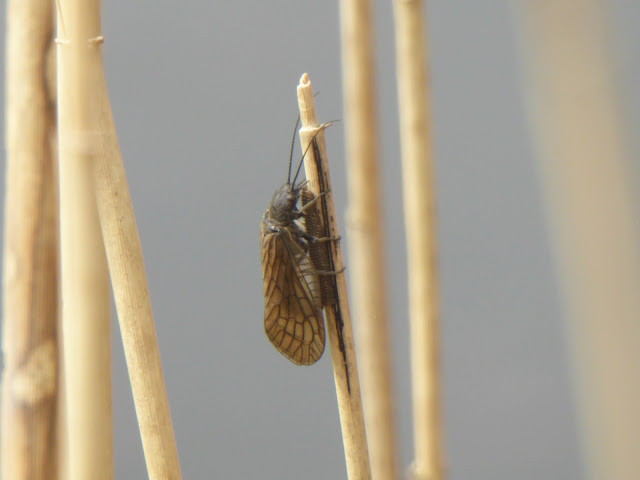 More insects - above and below - and both species in need of identification. I will add in the names if the kind people on iSpot are able to help. 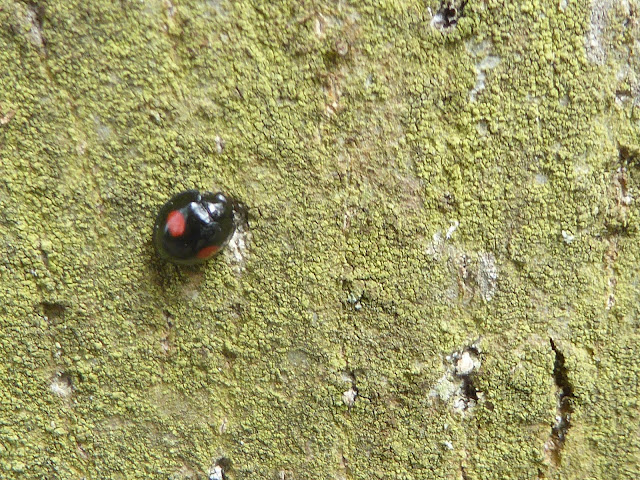 I am more familiar with ladybirds, and it was good to see our first 2017 Kidney-spot ladybird on the trunk of a tree. 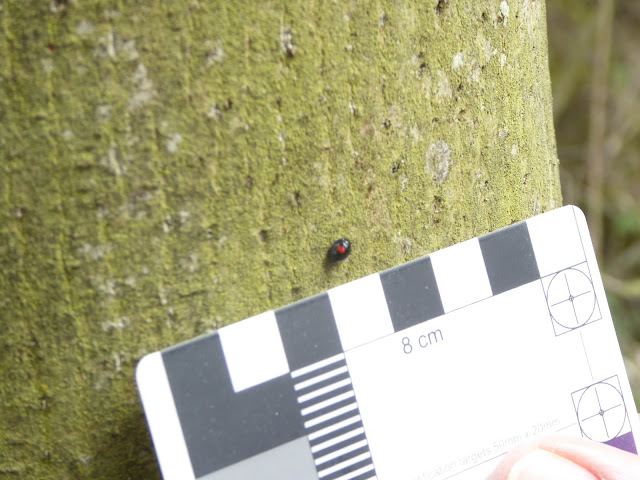 David produced his measuring card, and I will log the ladybird's details on the UK Ladybird Survey site. 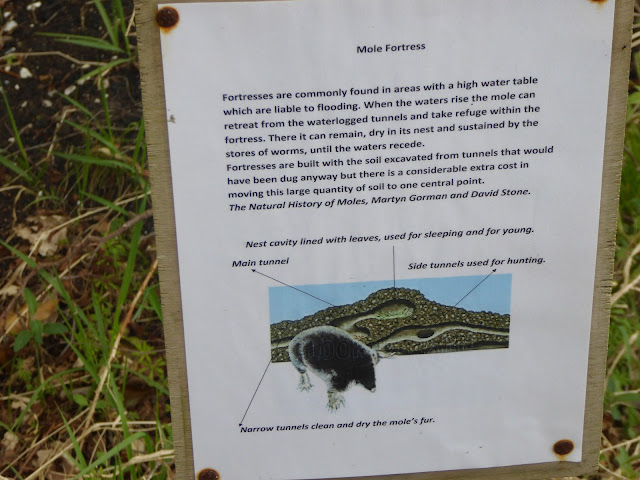 We did not see any moles, but there were some new mole heaps about. We also noticed a huge mole fortress, something quite new to me. 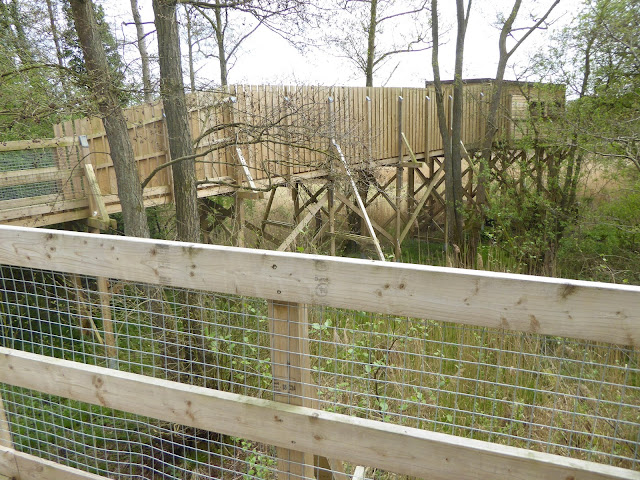 This was an impressive hide! 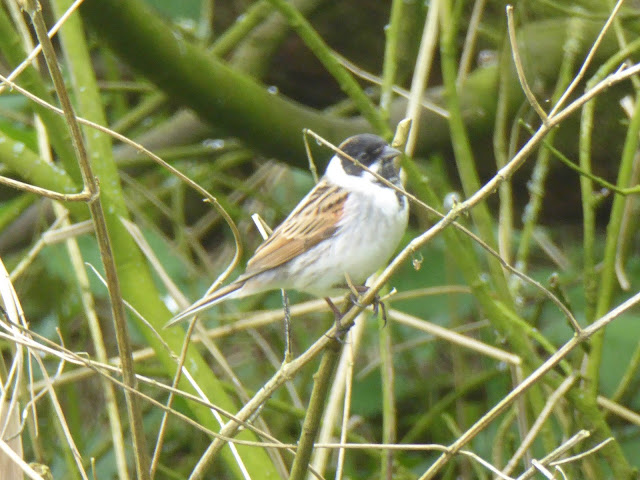 Our sightings at Sculthorpe Moor included Reed Bunting (above), Bullfinch and Nuthatch. 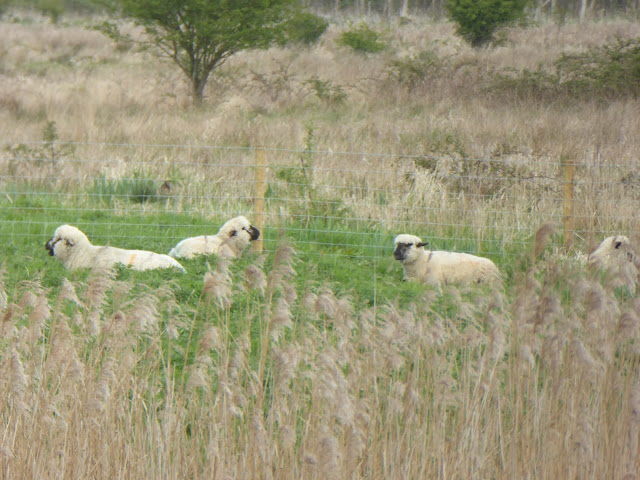 More woolly than wild, but we enjoyed watching these Suffolk (or Suffolk-cross) sheep. 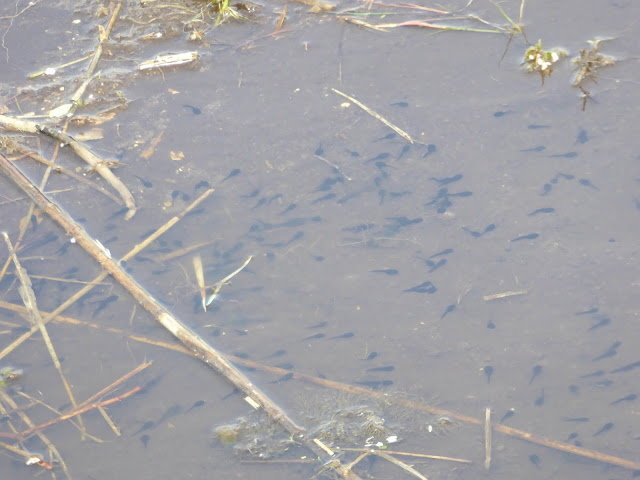 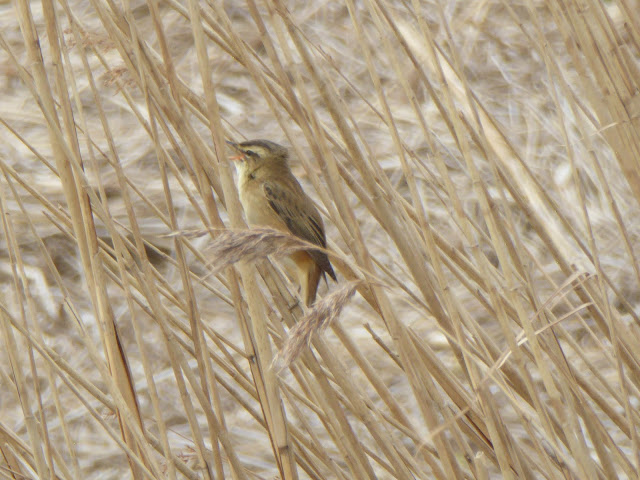 We had good sightings of Sedge Warbler at Cley and Sculthorpe... 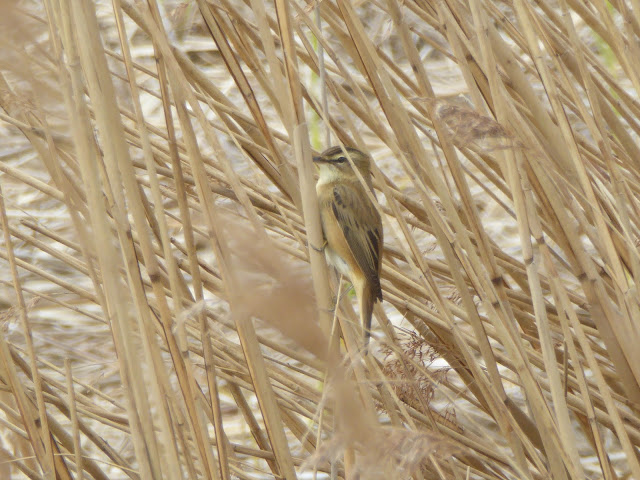 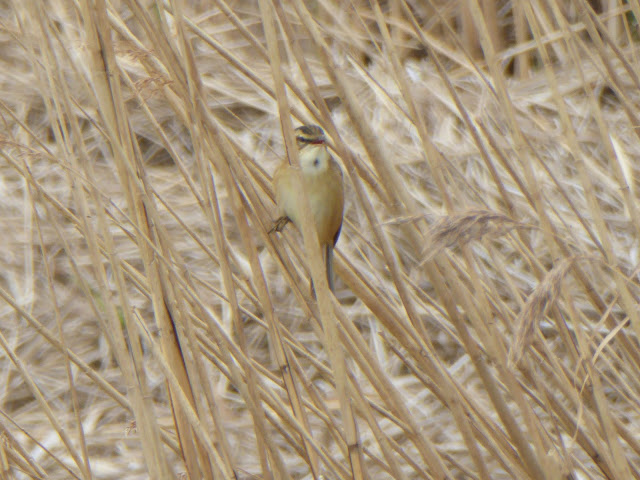 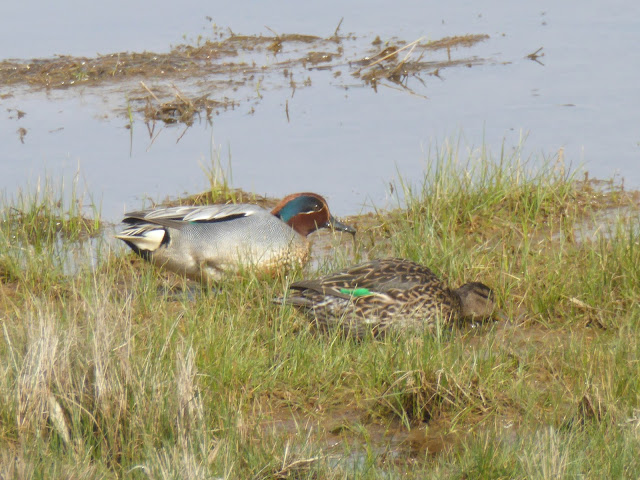 There were a few pairs of Teal at Cley: I love that iridescent splash of emerald on the female!

Hello, what a lovely outing and trip! Beautiful scenery and birds. Great sightings. Have a happy day!

It is many years since I visited Norfolk, and seeing these photographs bought back some lovely memories.
I can remember Wells, although I can't remember eating fish and chips but perhaps we did!!!