Welcome to my Tree Following post for July and early August.

These tree posts form part of a wider project run by Lucy Corrander from the Loose and Leafy blog. I am based in Suffolk, UK, where I am following an Acer negundo (aka a Box-leaf Maple). I am also continuing to keep an eye on my Silver Birch, B. pendula.

The Acer negundo is growing at a rapid rate. It is largely the foliage, of course, at this time of year; but the tree seems to be spreading out in most directions. I have to confess that I am still trying to find a way to 'connect' with this tree. Perhaps this is the poet in me rather than the citizen-scientist, but it certainly helps when there is more than a clinical interest! I wish I could find more insect or avian life in, on or around this tree. The only thing to mention is that there were (possible) hedgehog droppings underneath it. I would love to have hedgehogs in the garden again: I have not seen a live one for over a year, and that was in the grounds of the Cathedral of the Isles on Great Cumbrae, off the Scottish coast!


I have no idea whether the following observation is of any significance in relation to either the Acer negundo or the Silver Birch, but since Sunday there has been a crescent trail of mushroom-like toadstools, almost linking the two trees. Is this a sign of early autumn (I hope not!). More investigation is required.


The Silver Birch continues to fascinate and delight me. The sap has continued to rise (and fall, by which I mean drop), but I have not seen any more Cockchafers or Stag Beetles. The other birch, a Downy Birch just a few metres away, has dropped a lot of sticky sap on the cars. This has been a honeypot for wasps to the extent that I began to think that we must have a nest.


It is not only sap that has been falling. We have watched the Silver Birch 'raining' its showers of seeds (and pollen, I think) in the wind. On one occasion I stood underneath the boughs with a sheet of paper.


The coconut feeders on the Silver Birch have been much appreciated by family groups of Long-tailed tit (my favourites), Blue tit and Great tit. There have been times when all three have come at once.

I was having coffee one day when a streak of silver caught my eye. It was a juvenile Grey Squirrel. It scampered up the bark and leaped on to the coconut. It clung on there, despite swivelling round and round, for about fifteen minutes. Having been disappointed on our recent Scottish holiday that we only saw one Red Squirrel, I am not sure how pleased I should be about the arrival of this Grey one ... but it was a joy to watch.


There have been so many Woodpeckers out and about in Suffolk recently, but, alas, I have not seen (or heard) the ones that frequented our garden earlier this year. The Wood Pigeons are out in force, and the Blackbirds come and go. 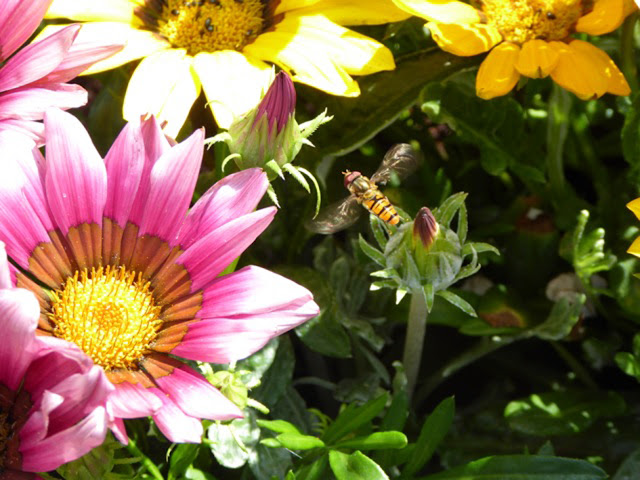 We have had some wonderful Marmalade Hoverflies, but their presence may have more to do with the Gazanias. I should like to think my new des res insect hotels have played a part! On the strength of these sightings, I have joined the Hoverfly group on Facebook. We saw one Dragonfly, but it was too quick for us to identify. There have been no Damselfly sightings to report around either tree ... as yet. Large White butterflies are frequent visitors at the moment.

This is the fifth sunny day in a row, and I, for one, am doing my best to cling on to summer. There are a few brown leaves on the Silver Birch, but you have to search for them. A colony of Winged Ants took centre stage two weeks ago, but their presence was part of a national irruption that happens each summer. There have been several 7-spot Ladybirds around the Silver Birch: I have just voted for this insect in the Royal Society of Biology (UK) insect poll. If you are UK-based, you might care to cast a vote, too. You can read about the selected insects here (and I love their allocated epithets!).

As you may know, I always enjoy keeping an eye out for similar trees on my travels. Last week we were at NT Dunwich Heath, where the Silver Birches were attracting a particular butterfly. I believe it is a Grayling (and a first sighting for me, although there were several about that day). These butterflies frequent coasts and heathland and are often - or usually - seen at ground level on sandy soils. Perhaps these butterlies were taking advantage of the sap. Graylings hide their forewings behind their hindwings when they are stationary. It is often possible to make out the 'eye-spot' wing marking when a butterfly first comes to rest: you can see this spot in my photo below. The species is listed under the Biodiversity Action Plan (BAP).

Next month we will begin to think about the season of mists, but for now I hope the summer suns continue to glow. Oh, and don't forget to see if there are any Perseid meteor showers above your trees in the days to come.

TFm5 Stoat !!! (As I looked out through the window yesterday morning, 5 August 2015, towards the Downy Birch at the front, I noticed a creature outside the front door. I waited and to my astonishment it ran back and forth twice more before heading into some undergrowth. At first I thought it might be a rat, but it did not have a rat's tail and was quite a different shape and colour to the rats I have seen in the past. I wondered if its short tail had perhaps been severed partway along, but it is possible that this was just the point at which the normal fur turned into the black tip. Of course, if the juvenile was still very young, its tail may have been very short. It looked incredibly like these kits here in the top photo. We live in a suburban area, but we back on to a nature reserve. I am guessing it was a youngster, who had perhaps taken a wrong turning after a fright. I have seen stoats before, but never SO close to home!)


Previous post ... my words on the RSPB Minsmere leaflet
Posted by Caroline Gill at 09:51

What a great post on your tree following. It is a pretty tree and I love the shots of the mushrooms, birds and butterfly. Happy Friday, have a great weekend!

Very interesting! I have struggled to think of new things to say about my tree as there aren't any visible changes, but you - you have done a marvelous job describing the environment your trees enjoy! Wonderful job, well done!

Great stuff! A grayling would be a new species to me, not sure if there are any in Notts. I think judging by the cream colour, some of your great and blue tits are youngsters! How sweet.

Wonderful post and nice to see so much going on...
Amanda xx

A lovely post - great news about the Stoat too :) I haven't seen a Grayling butterfly for years so it was lovely to see your photo :)

I love hearing about both your trees....and the trail of mushrooms is fascinating...my tree is not doing much this year.

I always enjoy hearing what people elsewhere call species we share. The "boxelder" is common here, and we call the winged seed pairs "whirlybirds"! (or samaras if we're among botanists) I like "seed keys"

Great observations! Hope you find the Hoverflies group as stimulating as i do, I'm totally fascinated by hoverflies now, such variety!