Tree Following - May to June

Welcome to my Tree Following post for May and early June. Even more transformations have taken place this month.

These tree posts form part of a wider project run by Lucy Corrander from the Loose and Leafy blog. I am following a Silver Birch, B. pendula, in Suffolk, UK, and what has up to now remained something of a mystery tree. You will find the other Tree Follower links on the Loose and Leafy blog ... so do take the chance to catch up with happenings in the arboreal world!

Having had a tree surgeon in the garden this month to deal with a couple of dead trees, I can now reveal that my mystery tree is indeed a Box Elder, or a Box-leaf Maple (Acer negundo), as we tend to call these trees in the UK. I feel pleased that I got there in the end - before the intervention of the expert!

Both the Silver Birch and the Acer negundo have continued to respond to the stimulus that is spring, and, of course, this month sees us marking the longest day. Can it be June already?

The chief excitement in a strange kind of way has been the arrival of two ... House Sparrows!

What a strange sentence to write when through my childhood these small LBJs were, as the song says, 'two a penny'. But the UK Sparrow population declined rapidly, falling by 60%, according to the RSPB, between 1994 and 2004. The reason in urban environments seems to be linked to a lack of suitable invertebrates during the birds' breeding season. The Sparrows have flitted between the two trees, showing a distinct preference for the Silver Birch. Is the Acer less popular with wildlife because it is not a native species, I wonder? Or have I failed to look hard enough for signs of life and biodiversity?

It has been exciting to watch a family of young Starlings feeding from the coconut that dangles from the Silver Birch. The mother was very helpful at times, and at others she seemed to hang back to encourage her brood to gain a little independence and nourishment of their own.


On the insect front, there have been few butterflies. However there have been three partially red insects, all in the area around the Silver Birch. You can read about them here. I am fascinated by the Ruby-tailed Wasp, which is really a 'cuckoo' species of Solitary Bee. It may look stunning, but it lays its eggs in nests that were made by another insect, and then when the larvae hatch out, they feed on the larvae of the host insect. 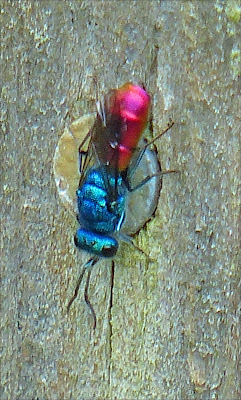 The native Kidney-spot Ladybird below was found on the same garden post as the Ruby-tailed Wasp above, pretty close to both Silver Birch and Acer negundo. Its identification has been verified by the UK Ladybird Survey, and its photo has been posted on my iRecord pages. 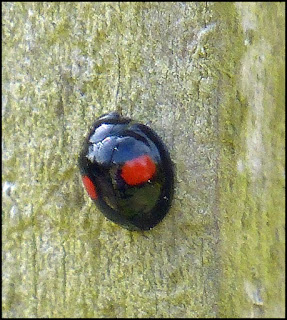 You can read about the Fire bug below in a previous post here. The pansy is close to the Silver Birch, but, of course, I cannot claim with any certainty that there is a tree-insect link! 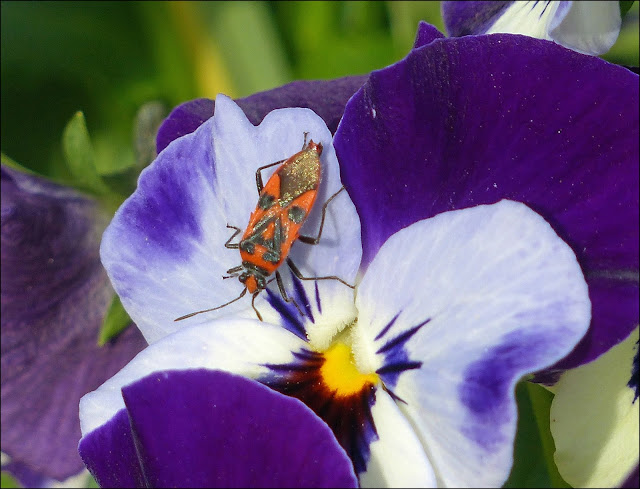 I have mentioned from time to time that there is also a similar but slightly different Birch tree, a Downy Birch in the vicinity. Individuals in the cluster of Garden Spider (Araneus diadematus) spiderlings below were beginning to emerge from their creche by this tree. My understanding is that they begin to disperse if they are disturbed, then quickly move back to the safety of the crèche. 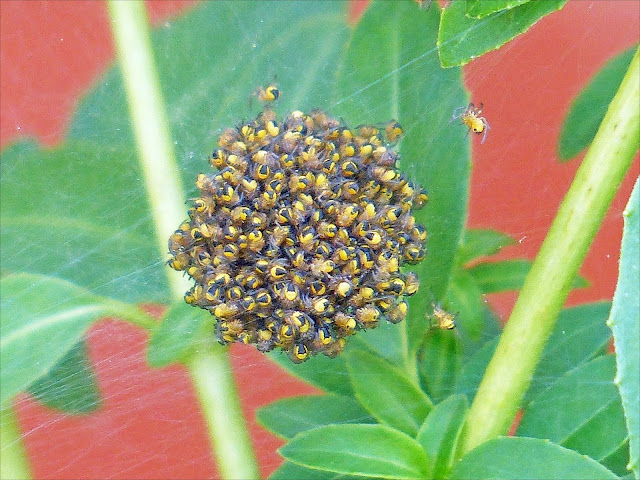 The Acer negundo finally had some bird and insect life about it. A charm of Goldfinches arrived, and there seemed to be birds trying to pair up prior to breeding. One of the Goldfinches seemed to have a taste for some tiny Forget-me-not type flowers in the grass. 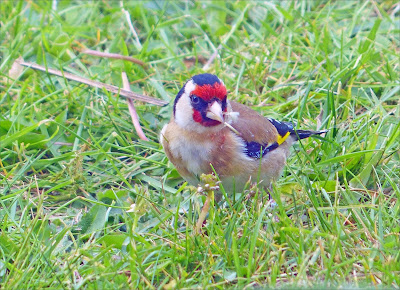 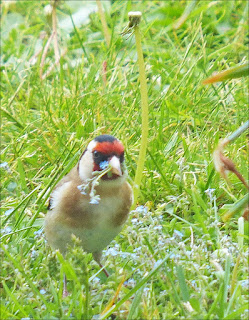 I saw a cloud of flies and then this rather secretive insect, which is proving hard to identify on account of the poor quality of my two record shots below! It may be a Hawthorn Shieldbug, which is not always found on Hawthorn. And, incidentally, there is a very attractive deep pink and white blossomed hawthorn nearby. 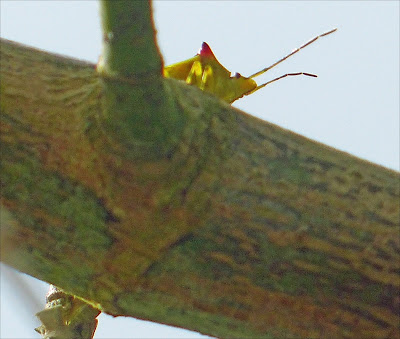 Well there is so much going there Caroline. I love your birch and all the wildlife you notice around your trees....I really should take a closer look at mine.

I was really taken by the cluster of spiderlings! What a wonderful thing to find!! And that's a great photo with the red and green background.

Fabulous pictures of squabbling starlings and pretty insects. My trees are now all out in leaf, blocking out a lot of light to my postage stamp sized garden

So pleased you have found out what your tree is, turns out we have one at the park just on the edge of the pond, it's a lovely tree. Great news on the House Sparrows, we are very lucky here as we do have quite a lot nesting in the roof. This morning there were 10 feeding on the ground the most I have had at once was 30+ when they all fledged at once...
Amanda xx

Glad you've named your mystery tree. I've adjusted your entry on the Loose and Leafy Tree Following Page in consequence so perhaps you might check I've got it right?
http://looseandleafy.blogspot.co.uk/p/what-is-tree-following-and-list-of-tree.html

The spiderlings - I've been trying to photograph a similar nest (on a box bush) this week. The threads are more noticeable in the pictures than they are in 'real' life. About them dispersing . . . they seem only to go as far as the outer reaches of the gauze and I find it fascinating to see them pee-ow outwards then reassemble into their ball. I've been told they eat each other but haven't yet found a mention of this on the internet. One can hardly count them!

Apologies for being late in reading this post. I've been away a lot recently.

Do you subscribe to any other websites about this? I'm struggling to find other reputable sources like yourself