I was very impressed with fellow-blogger, Juliet Wilson's bird list total for 2013. Do take a look here.

I began logging ...
... but I failed to keep a total. So no prizes for guessing the nature of one of my New Year Resolutions!

A beautiful Great Spotted Woodpecker graced our feeder for the first time on 23 December. I failed to get a picture then, but will post an old photo for those of you who may not know these birds. I have not seen it since, but we keep hoping it will come back for more coconut. And if it does, it will be added to the 2014 list! 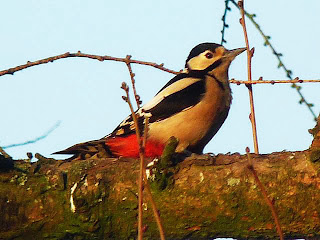 My aim is to keep things simple in the hope that my goals remain relatively easy to achieve. I plan to keep an ongoing alphabetical list, which I will re-post every so often once it has been updated. I hope to log dates and locations ...


And don't forget the RSPB Big Garden Birdwatch, which takes place on 25 and 26 January!
Posted by Caroline Gill at 16:31

Sounds like you have a nice goal, keeping the list..I am not counting but I am listing my yardbirds on EBIRD..I enjoyed your photos, pretty scenes and lovely birds. Have a happy day!