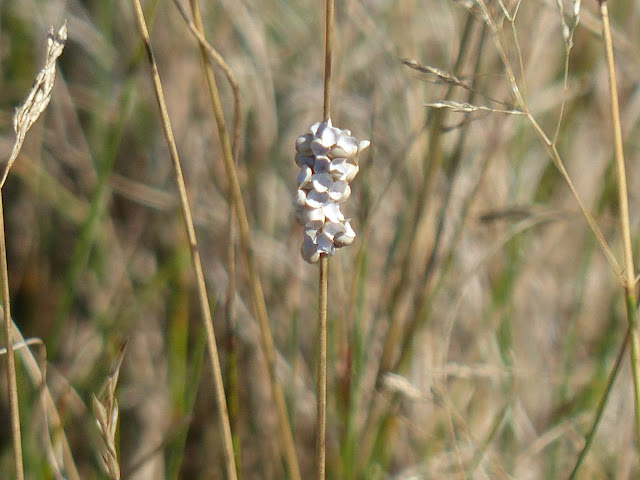 I saw this *mystery* at Carlton Marshes in an area of long dry grass ten days ago. I assumed it would be a kind of cocoon, but with the magnification of the photograph, I am not so sure.

I can fairly safely discount 'mineral', but is this 'animal' (e.g. cocoon/s) or 'vegetable' (fungi or mould perhaps ...)? Something akin to ergot came to mind, but ergot doesn't seem to fit.

Do let me know if you can solve my mystery! Thank you.


STOP PRESS, 10 SEPTEMBER 2013   My sincere thanks to all who put in their pennyworth in the Comments below. I *believe* Wilma may have set me on the right track with her suggestion of water snail eggs or egg cases. It is not something that would have crossed my mind, but the stalk was just by a special water course inhabited by rare Fen Raft Spiders (which sadly I didn't see), so it sounds plausible. Unfortunately the wind was blowing, as it often does over the marshes and fens in my region, and it was hard to get the camera to focus on a single swaying strand of grass! Take a look at these pages here and here and ... and although these ones found by Google are of Apple Snails in the USA rather than a snail species at Carlton Marsh, I think you will get the picture. Thank you all once again!

LATEST UPDATE, 11 SEPTEMBER 2013   It seems it may be 'vegetable' rather than 'animal' after all! Phil of the Cabinet of Curiosities blog has offered the following: 'Hi Caroline, There's a photograph of something similar at http://homepage.eircom.net/~hedgerow16/oct21.htm. There's a discomycete fungus called Lachnum virgineum that looks rather similar when it has dried out a bit, which sometimes grows on dead plant stems...' Thank you, very much, Phil, for this.

Neil Mahler said...
You can safely rule out fungi Caroline. Way too big for any type of Lachnum. Egg cases is more on the right track methinks.
Neil Mahler, County Fungus Recorder, Suffolk.

Weird and neat at the same time! I have no idea, sorry I can not help. Great shot, though!

I have similar things on my chokecherry tree. As I was trimming it back I noticed them frequently. My are only similar by shape as mine are all deep black in color with the same texture.

Just a guess - maybe they are snail eggs or the remains of snail eggs after hatching.

see if this link takes you to a photo of pond snail eggs that might be similar to your photohttp://www.biol.andrews.edu/everglades/organisms/invertebrates/mollusks/pond_apple_snails/egg_additional__5.jpg

Very strange....looks like some kind of white cup fungi I agree, but never seen it growing on a stalk like that. Sorry - hopeless!

Thank you all so much for your comments ... I noticed some grass snake eggs on the web last night, Wilma, and while these obviously were not those, it made me think 'egg?' as a possibility. I need to take a look now at water snails ...

Hi Caroline, There's a photograph of something similar at http://homepage.eircom.net/~hedgerow16/oct21.htm

There's a discomycete fungus called Lachnum virgineum that looks rather similar when it has dried out a bit, which sometimes grows on dead plant stems.....

hope you find out what your mystery is.

It's certainly interesting whatever it is! I read all the updates and hope the mystery is solved. There is so much to learn about nature when you look at what is around you.

You can safely rule out fungi Caroline. Way too big for any type of Lachnum. Egg cases is more on the right track methinks.
Neil Mahler, County Fungus Recorder, Suffolk.