Islands and Islets (8): An Inner Hebridean Odyssey - Wildlife on Mull and Iona


We spent three nights on Mull and one day on Iona. The weather wasn't brilliant, although the sun came out for a few hours during the afternoon of our last day (which we spent on Iona, where the colours of the kelp, the silver sand and the pure azure water were amazing). 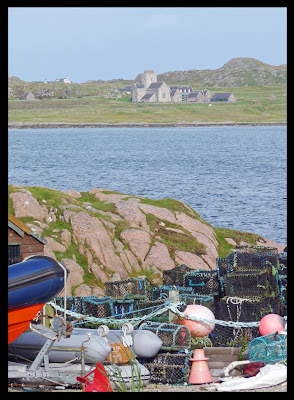 We did not see many vertebrates during this leg of our journey - though we enjoyed watching the bats (not sure what species) at Uisken Beach on the Ross of Mull and a few rabbits here and there. We also saw four red deer on the wonderful road between Duart and Pennyghael, a toad in Bunessan and a seal in the strait between Lochaline and Fishnish.

My (separate)  Bird list is a little longer, though due to the wild weather, we didn't come across half the birds we had hoped to see. Needless to say, we thoroughly enjoyed watching the following (in order of sightings) ...


The Iona Community has the 'Wild Goose' as its symbol. Many associate the Community's worship with the liturgical compositions of John Bell. You can read about the background to the Community here in a book review by Dr Josh Sweden. The fascinating history of Iona, the island, is tied in with the MacDonald Lords of the Isles, and it was one of these, Reginald, who sent monks to found a Benedictine community in this out-of-the-way island that had been occupied by Columba.


We did not see many invertebrates during this leg of our journey. There was a wonderful striped caterpillar near St Oran's Chapel on Iona (photo for a future post), and plenty of craneflies in Bunessan on Mull. I also noted some bees and snails. There were a few sea anemones (these belong to the group of Cnidarians - like jellyfish) in the rock pools near the ferry on Iona.

The otters and cetaceans may have eluded me, but we saw many wonderful creatures nonetheless!

What a wonderful trip you are having. This looks like a great place to visit and go birding. I love the carving on the pillar...beautiful! The scenery is so beautiful. Your bird list looks like you are doing very well1

oh Mull and Iona are wonderful places aren't they?

Thanks for identifying my broom moth caterpillar, I'm pretty sure you're right on that!

I just now enjoyed your blog, Wild and Wonderful. All the photos were wonderfully engaging. Taking shelter (the birds) just WOWED me.

Thanks for sharing yourself.

This may be duplicative, but I just now enjoyed your blog...all the photos and text.

Thanks for sharing all!