Butterflies and Moths (11): The Hummingbird Hawk-Moth

David and I have occasionally seen the odd Hummingbird Hawk-Moth in the UK, but this summer has been a bumper year for us. The first examples we saw were flitting and fluttering around the castle walls at Dinefwr near Llandeilo in Wales. They were well camouflaged against the stone - and they proved far too fast to catch on camera. Their name in Latin, Macroglossum stellatarum (Linnaeus, 1758), presumably means large tongue (or proboscis, used for extracting nectar), and I imagine the second word must relate to stars.
We were particularly delighted to find a 'flock' of these feathery creatures, making their way along the row of geraniums outside our apartment in the Pylos area of Messenia in the western Peloponnese.
We made a couple of visits to Methoni with its vast castle, where more of these moths were attracted to the pink pea-like flower you can see in the top photograph.
The picture below shows the tower promontory, or Bourtzi, comprising a tiny fortified island at the seaward end of the castro with its Venetian walls. This part of Greece is steeped in legend: Homer assigned the epithet, 'rich in vines', to Methoni. Much later on, Cervantes is said (by some) to have been a prisoner here: his experiences are recorded in Don Quixote. 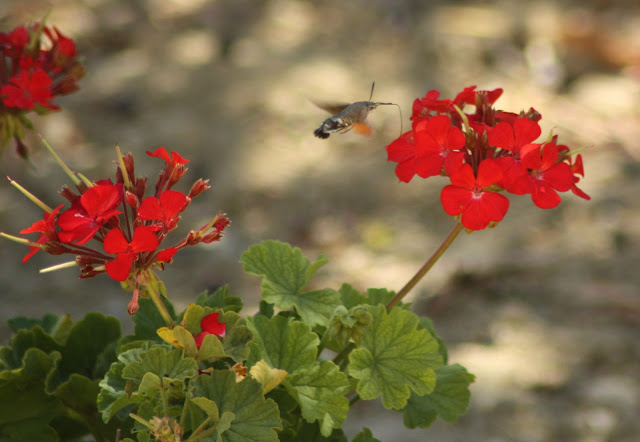 I just love those hummingbird moths! Yours looks a lot fuzzier than ours, which is yellow and black like a bumble bee. Fascinating critters. We had more then usual this year, too.

These are great shots Caroline and an interesting post too. I tried a few weeks ago to photograph one in my garden but it was just too fast and all I got was a blurr of wings in the photo. These are my favourite moths!

I have seen them here in Georgia USA too! Your photos are wonderful. My adult niece/nephew are visiting Greece in a few weeks.

Hi Caroline, you got some amazing pictures! I know it's extremely difficult to photograph these moths. This year I didn't capture any but I hope they start coming once the temperature gets cooler. I'm fascinated by them too.

what a lovely photo of the castle. Wonderful captures too of the hummingbird hawk moth, I've only see one, and that one was in the middle of Edinburgh!

our moth's look very much the same, don't they? such lovely pictures. i especially like those ruins. you live in such a beautiful area. have a great day~