A 'Floral' Afternoon on the Beach at Aldeburgh 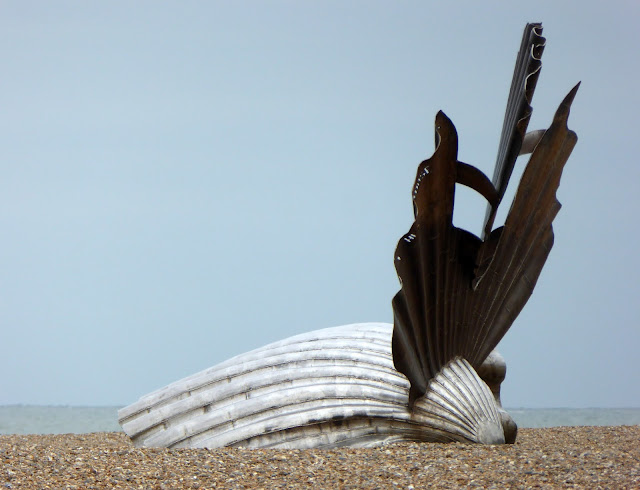 We spent a little time on the beach at Aldeburgh yesterday afternoon. As expected there were a lot of people out and about on the footpath that runs between the car park and the beach, but there were very few people on the shingle and only three in the sea. As you can see there was nobody in the vicinity of the iconic Scallop.

There were few birds about, just the odd gull overhead and a single juvenile on the beach. There did not seem to many insects either, so I decided to photograph some of the plants. Many, if not most of these, are fragile and rare; and consequently cannot be picked.


This may be Common Restharrow. I find I am a bit rusty on my wildflower names. The insect is probably a Cinnamon Bug. I hadn't realised it was there until I uploaded the photograph.

There was a straggly clump of bramble near the footpath, and David noticed this rather well-camouflaged damselfly. 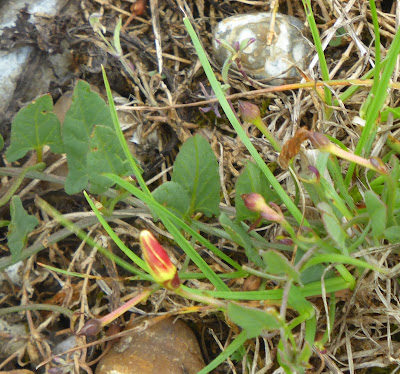 The leaves in the photo above look similar to a Bindweed. But I really don't know whether I am on the right track with this red and yellow bud. 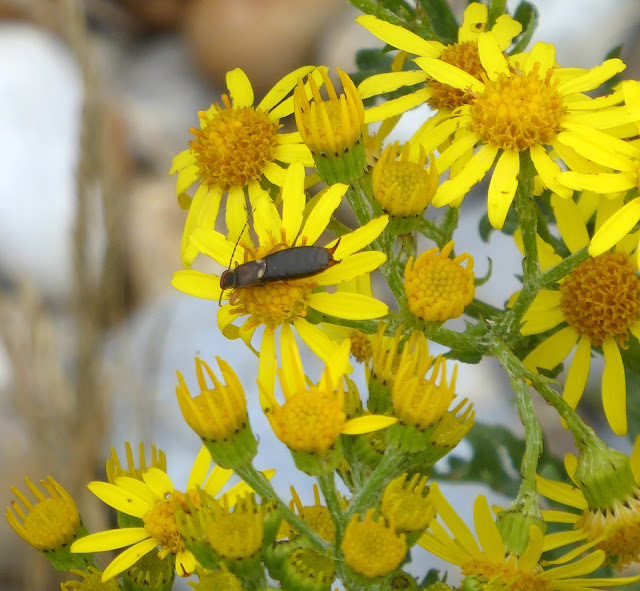 There were a few clumps of Ragwort, so we kept a close eye out for Cinnabar caterpillars. I am wondering if the insect in the photo above is a type of (possibly damaged) Earwig. Do let me know if you recognise it, and meanwhile, I shall post it on the iSpot site.

There seem to be quite a few yellow plants along this stretch of coast. I presume there must be a reason: could it be linked to salt-tolerance?


I always get confused when it comes to saxifrages and stonecrops. I wonder whether the clump of vegetation below may be related to Biting Stonecrop. 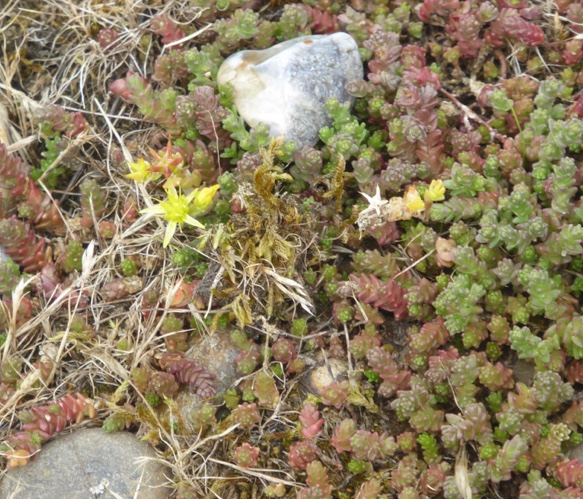 White Campion is fairly distinct, but Sea Campion and Bladder Campion are not so easy to tell apart. However, I believe the plant below is Sea Campion. There were quite a few clumps on the shingle ridge. 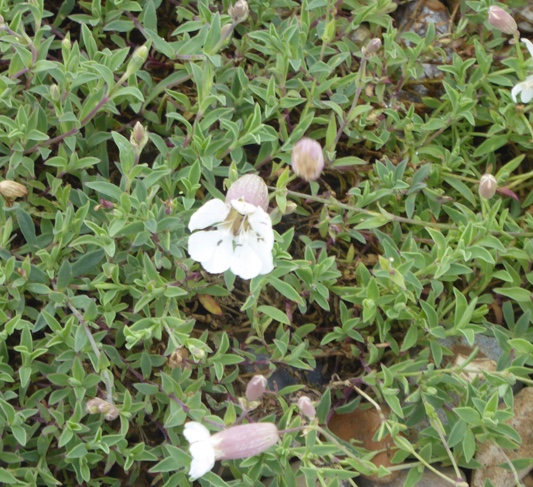 I don't often encounter Groundsel these days, but we came across a small specimen (below) near the upper edge of the beach. 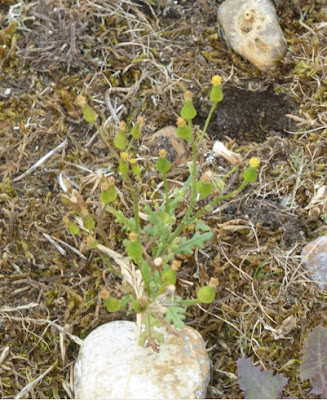 And here is the juvenile gull! 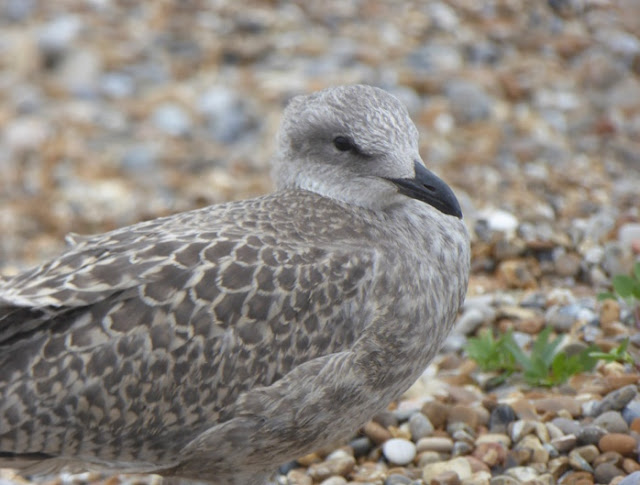 I love the patterning on its scapulars and coverts. 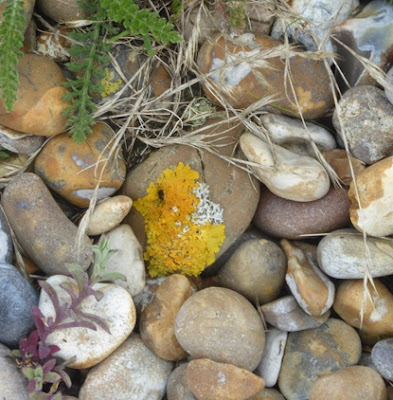 Lichen is usually an indicator of clear air. Aldeburgh is considered a healthy, if bracing, place to live. 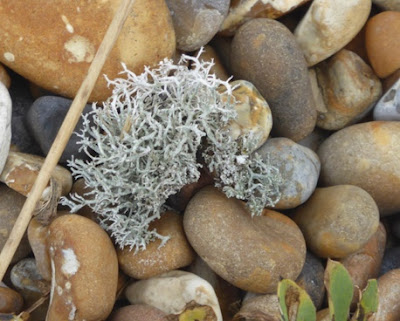 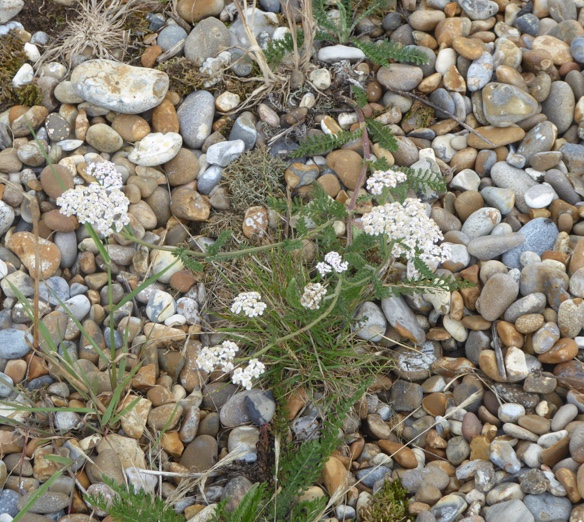 I'm guessing this is a variety of Yarrow above. 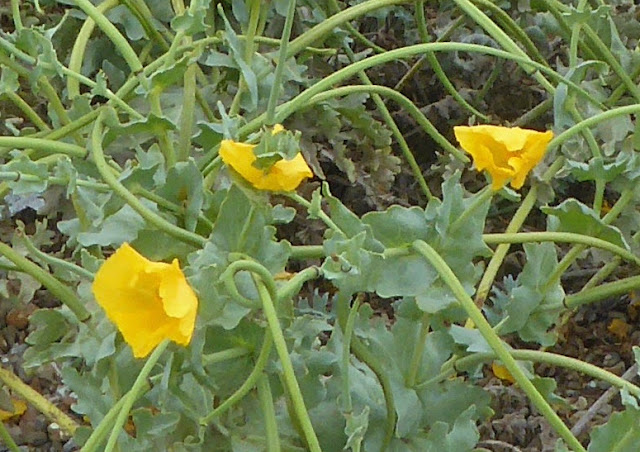 The yellow flowers of the Horned Poppy are unmistakable. 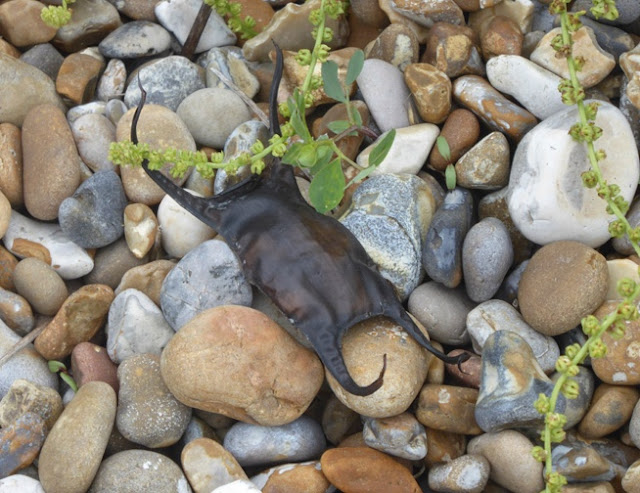 We noticed a couple of 'mermaid's purses'. 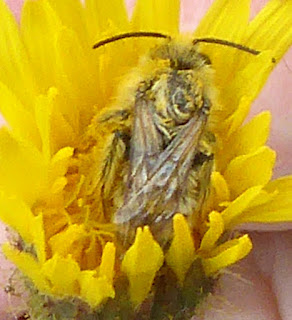 There were  several clumps of this yellow plant in the photo below; and in one of the dandelion-like flower heads, I noticed what I thought at first was a small moth. Closer inspection suggested a bee of some sort, and I hope someone on iSpot will be able to enlighten me. I apologise for the poor quality: stem and insect were rocking to and fro in the wind. 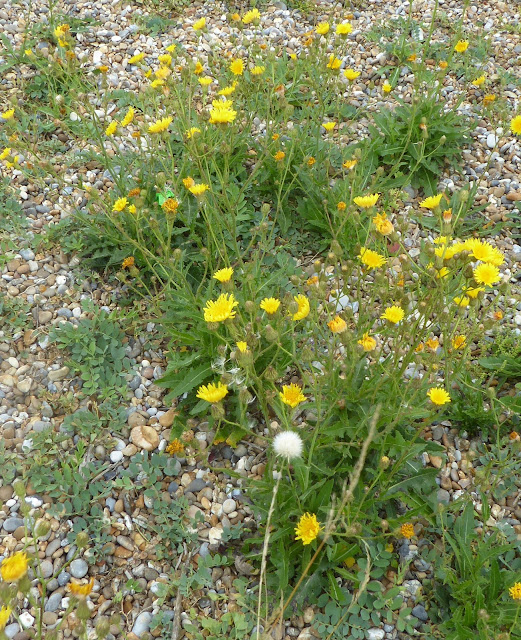 The photo below shows how empty the beach had become by about 4.30 in the afternoon. The village with the tower is Thorpeness. 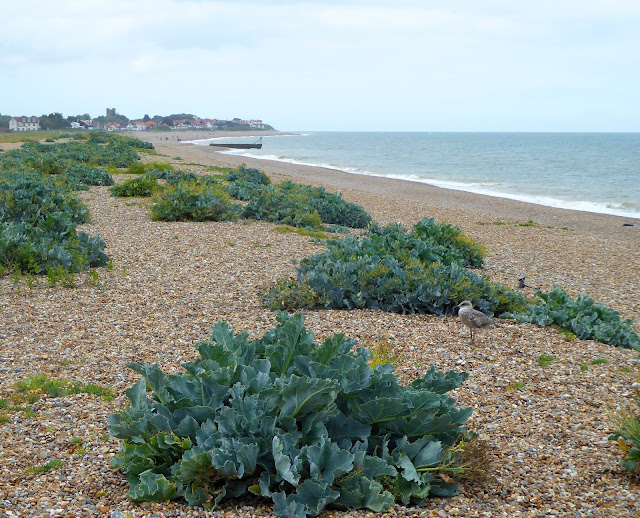 Sea Kale, in the pictures above and below, seems to grow well here on the stony beach. 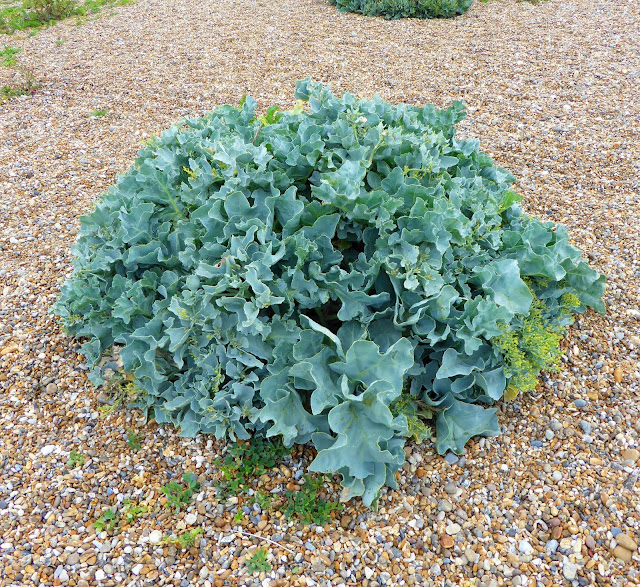 It is a plant protected under the Wildlife and Countryside Act of 1981 and should not be picked. 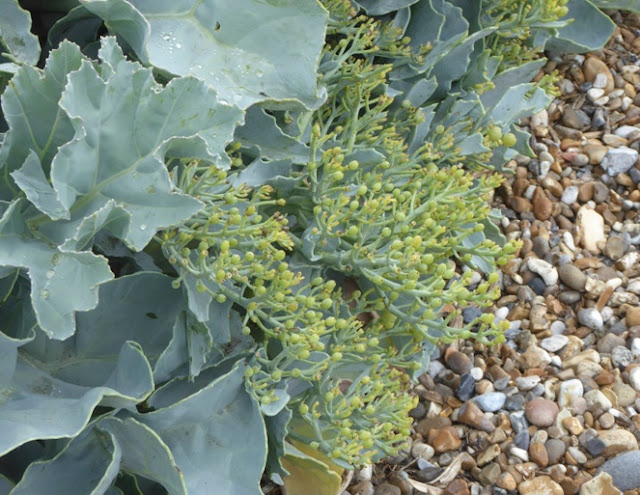 I am always intrigued by these lookout poles. In my childhood we knew them as 'bear poles'. 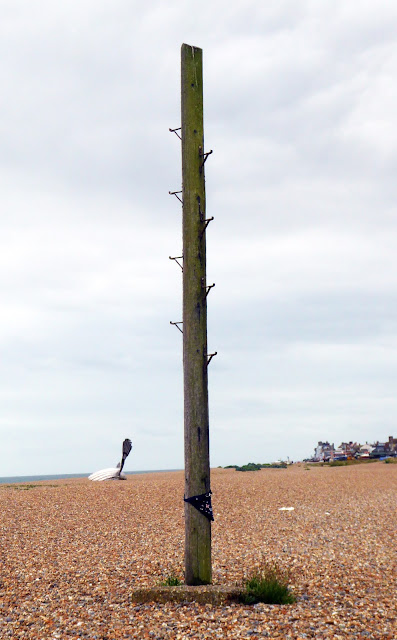 We kept looking at the stems of Ragwort... 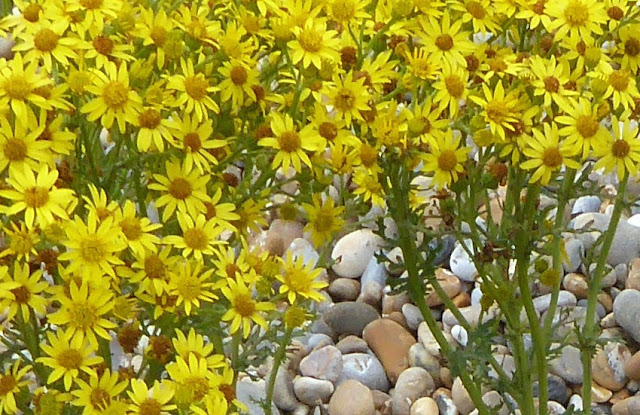 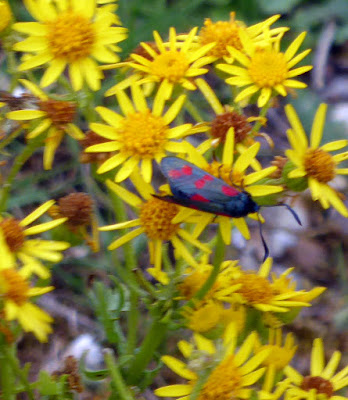 ... and a single striped Cinnabar caterpillar. 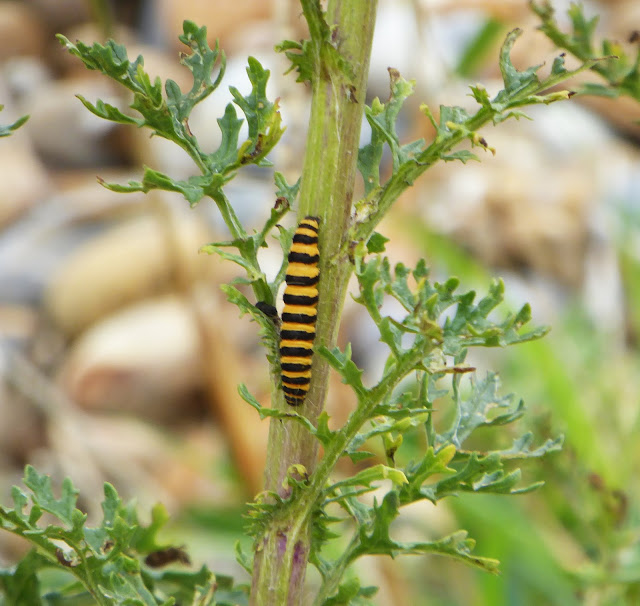 The plant in the photo below is the Sea Pea, another legally-protected plant that is well adapted to the harsh terrain. Its low-lying nature means that it is sheltered from the force of the winds on this exposed east coast. 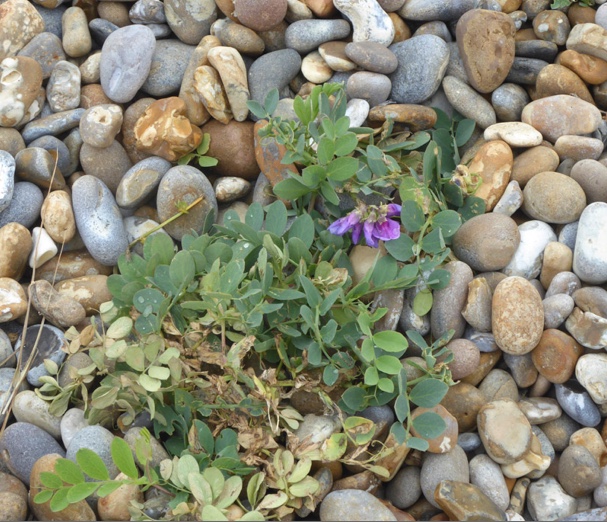 And finally, as we returned to the point where the beach joins the path, I noticed a few red Poppies. 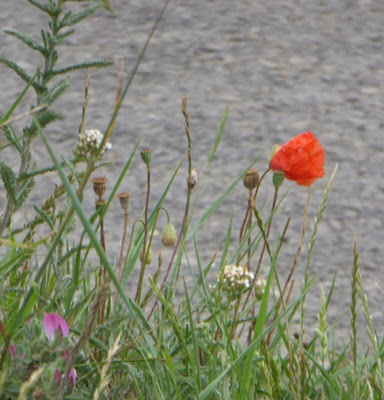 P.S. My thanks to the author of Odo-meter and Imperfect and Tense blogs for informing me that the damselfly seems to be a female Small Red-eyed specimen, a variety new to me. Further thanks to Conehead54 for indicating that the same damselfly is a female Common Blue. I will see if we have a better photograph which may possibly make a more definitive ID possible. Watch this space!
Posted by Caroline Gill at 22:10

Thank you for sharing your walk along the beach. It is several years since we've visited the Suffolk coast, but I hadn't realised just how many scarce plants live there. I think your damselfly is a female Small Red-eyed Damselfly.

what a lovely series of photos, Caroline!

I can't help with the fennel but you're right with the rest harrow and the yarrow (and they could be combined nicely in a poem!). I'm glad I'm not the only one wh gets confused between saxifrages and stonecrops,

Some of the ragwort in Edinburgh is covered in cinnabar moth caterpillars! Always lovely to see, but so often councils get rid of the ragwort.

Fabulous selection. I’m always struggling to identify plants and insects after I have photographed them despite trawling through local plant books. Very different flora to our local beach. B x

Hog's Fennel is a pretty rare plant. Yours is ordinary Fennel-not native but frequently naturalised, especially near the coast. Agree with Common Restharrow with Cinnamon Bug- the latter has become much more numerous in recent years.

Damselfly is a female Common Blue.

Lovely shots as ever!

How lovely to see a deserted beach :) The scallop sculpture is so very beautiful. You saw a wonderful selection of flowers and insects Caroline. It looks a lovely walk.

Sorry Caroline not sure if I sent my comment so if I did and this is repeated please delete one! A wonderful walk and how lovely to see a deserted beach. The scallop shell sculpture is so beautiful and you saw a wonderful variety of wild flowers and insects. A lovely set of photos :)

A lovely walk, I have enjoyed seeing all of your photographs here.
Thank you.