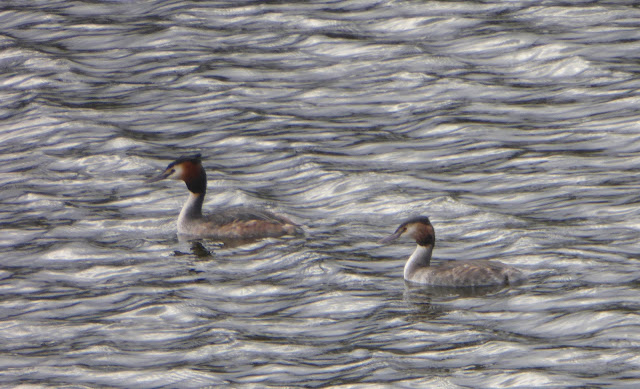 My small Lumix camera has not coped well with the low light, but it was good to see several pairs of Great Crested Grebes on the reservoir at Alton Water Park on the Shotley peninsula in Suffolk. We also spotted Moorhen, Coot, Mallard and a single Tufted Duck.

The ducks below have thrown me: I had initially assumed that they were two of the Goldeneye that will be leaving soon for their breeding ground, but I am just wondering whether they are in fact female Tufted Ducks, the far one being a white-vented variant. Do tell me what you think: I have a hunch that I may have overlooked the obvious! 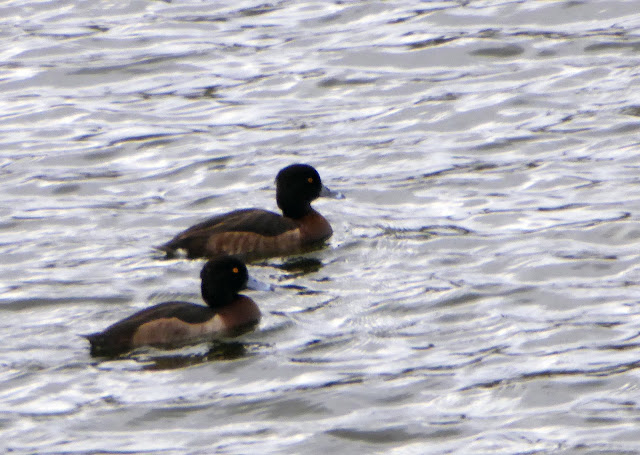 There were loud twitterings from the bushes, but most of the small birds kept to the thicket, the one below being an exception. A pair of Bullfinches could be seen flitting to and fro through a dense mass of twigs. 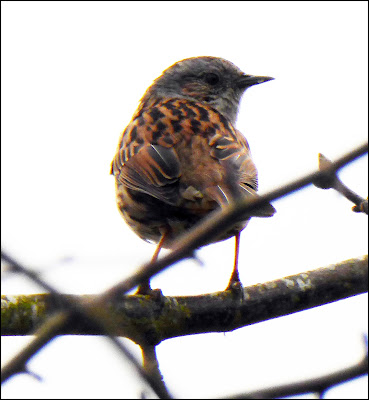 The light, such as it was, began to fade, and we headed back to the start of the trail. This was the scene at our turning point: 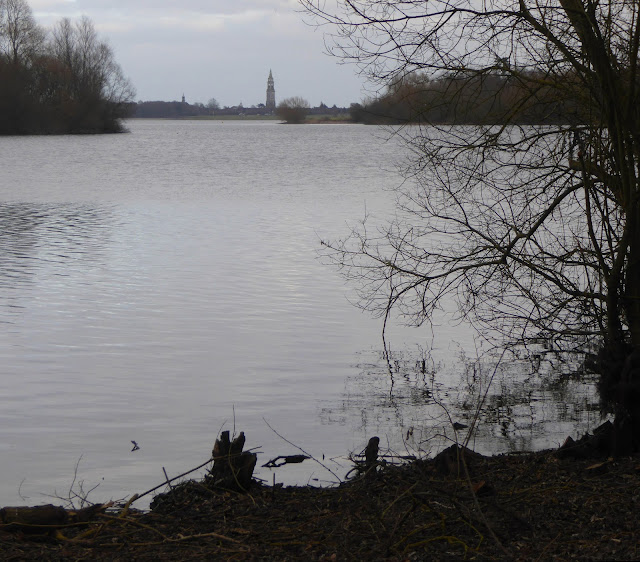 The tower is part of the Royal Hospital School in Holbrook.

Alton Water is a reservoir. It is used for recreation by wildlife enthusiasts, cyclists, dog walkers and sailors. You can read more about the spring wildlife here.
Posted by Caroline Gill at 17:34

Were the great crested grebes dancing?

Thank you, Juliet, for helping here. I think we were thrown because one had the white patch and the other didn't!

Sadly none of the pairs of Grebes were displaying, but we suspect they had been as folk were camped out on the bridge with long lenses.

Look like female tufties to me - the goldeneye has a rather different body shape, I was pondering this while watching a pair with a group of tufited duck on Sunday. I might be imagining it, but the golden eye is longer in the body and lower in the the water than the tifted duck, which is compact and boyant

Good description there from Simon on the differences between the female tuftie and goldeneye!