I am just recovering from a bout of bronchitis, so have not been out and about very much recently. However, we decided to go for a drive yesterday afternoon in the hope that we might see a Barn Owl near the River Deben.

Just as we were approaching the lay-by that has proved fruitful for bird watching in the past, we drove under some branches and noticed a bit of commotion. There were people with binoculars watching a large sedentary bird of prey over our heads.

We pulled in when it was safe to do so, but by the time we had parked, the bird had flown off. The people with binoculars told us that it was a Black Kite, and that it had made several appearances in the area. We were pretty excited!

Red Kites were under severe threat when I was growing up. By the time we moved to Wales some 25 years ago, the trend was just beginning to swing back in favour of these majestic birds. We even had one flying over our house, high above Swansea Bay.


Back in 2010, I heard that there was a Black Kite over Gigrin Farm in Ceredigion, but I did not have the chance to see it.

I had only ever seen one of these birds in captivity (see photo above), until yesterday. If only I had had my camera poised and ready!

The Kite was not the only bird of prey out and about. I just managed to take a quick photo of this Kestrel who perched for a short time, high up on a bare branch: 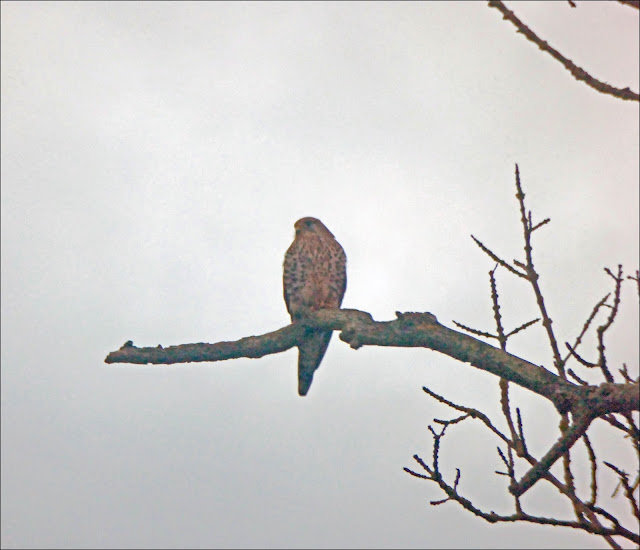 We drove on a little, and as we did so, a huge white sweep-of-a-bird flew on ahead of us down the road. It was, of course, a Barn Owl.

We pulled in safely and watched it quartering an expanse of marshy field. The light was fading fast by this time, and the bird stayed at a distance from the road. 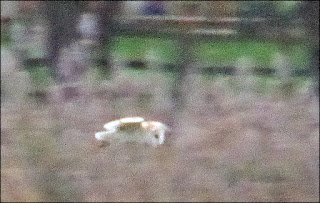 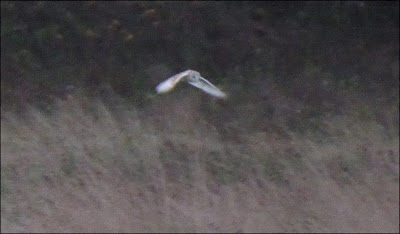 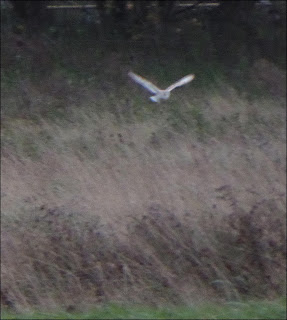 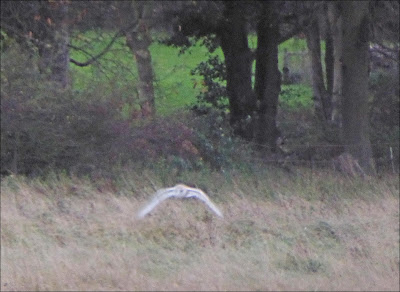 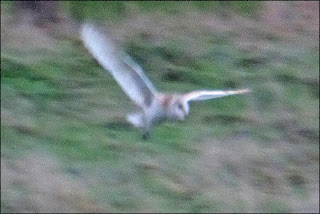 David took this photo below, which is definitely the best! 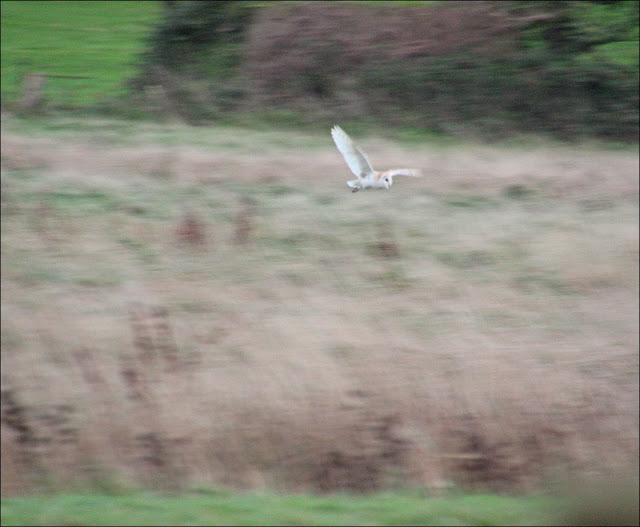 We may have had wonderful Red Kite sightings in Wales, but we rarely saw owls. Suffolk seems a good place for them: there is a lovely photo of a Short-eared Owl on the shingle at Felixstowe here (scroll to Monday 16 November) on the Suffolk Birding with BINS blog. John Richardson (of Old Man Minsmere blog) has terrific photos of Short-eared owls here. Owls - what magnificent birds!

lovely photos of the barn owl, Caroline, such ghostly creatures I always think, though I've never seen one.

I'm hoping to be able to catch up with the 10 short eareed owls at Musselburgh this week, I've already had two brilliant sightings of individuals, but I've got my fingers crossed for the whole group!

Just wonderful, Caroline--all! Your zesty writing and images. Makes my heart soar. Glad you were out and about. Miss you.

I enjoyed reading about your trip, of course, because your descriptions are both vivid and zesty--we're right with you, always. And your bird photos are wonderful--makes my heart soar. Miss you!

Great captures! Would die to see a red kite in Notts, let alone a black one. The kites are the most beautiful of all the raptors

Loved reading about your trip and seeing the photos and wonderful to see a Black Kite and Barn Owl sightings are always so very special :) Short Eared Owls sightings are occurring fairly locally so hoping to try and see one.

Wow, cool sightings. I love the Black Kite and I would love to see the Barn Owl in the wild.
Have a happy day!

I enjoyed reading your story and seeing the photos, I must admit I am not good at naming birds, apart from the ones I frequently see in my garden.