This post is the ninth in my Tree Following series, part of a wider project run by Lucy Corrander from the Loose and Leafy blog. It is the first post of the new year, but is actually largely about December 2014. I am following a Silver Birch, B. pendula, in Suffolk, UK. You will find the other Tree Follower links on the Loose and Leafy blog ... so do take the chance to catch up with happenings in the arboreal world!

December has, inevitably, been a month of bare branches. Unlike this time last year when the weather was mild and damp, we have had a run of sub-zero temperatures, with wonderful frost-flower patterns on the car roof. 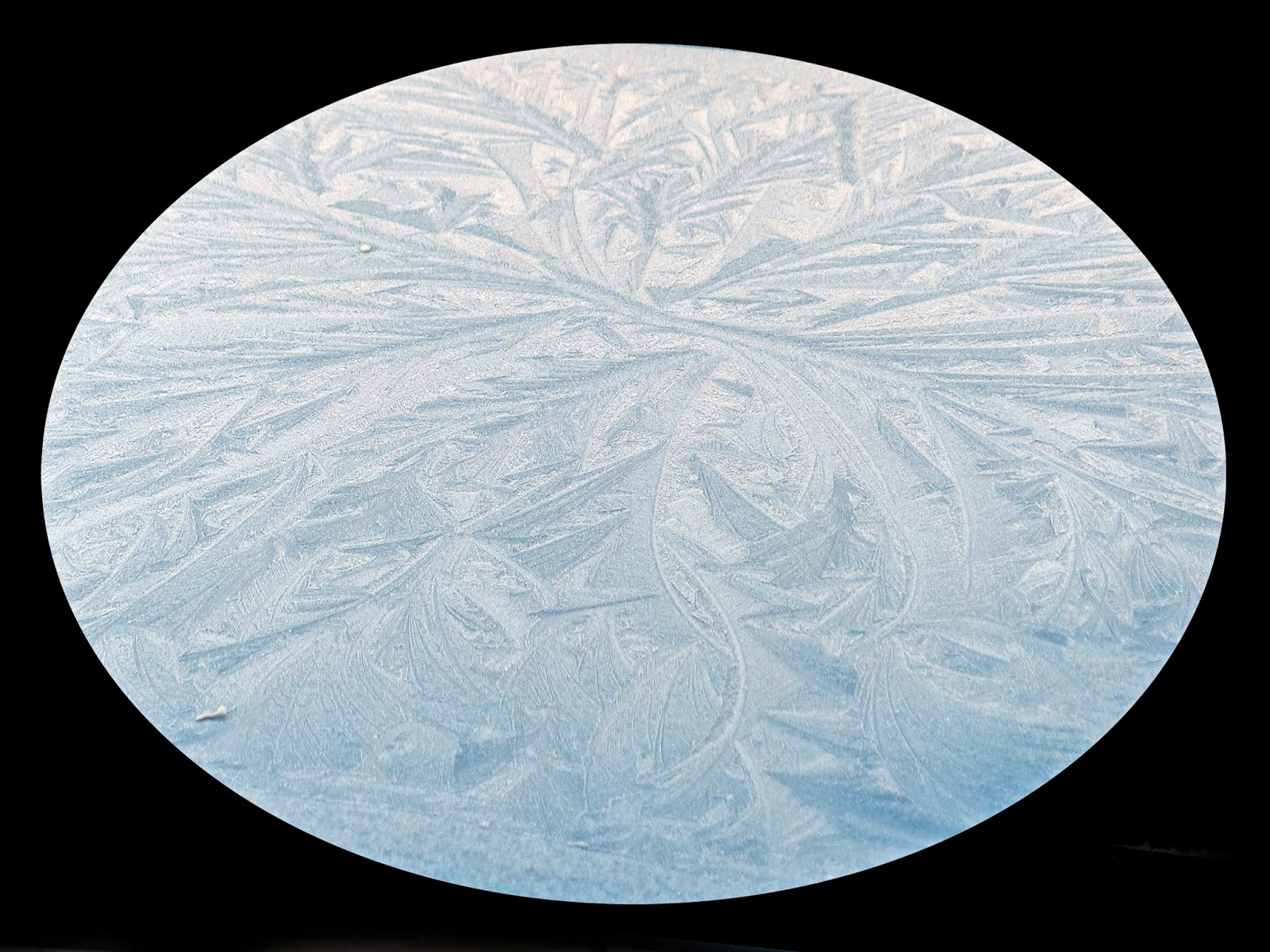 The chill factor has not prevented the Silver Birch from developing: take note of those forked 'twig ends'! Spring may not quite be on the way and last year's seeds are still winging their way on to my windowsill, but this kind of new 2015 growth is good to see. As I write the sky is overcast and the air is saturated with moisture, but it was bitterly cold at dawn.

I see the occasional Grey Squirrel in the tall tree that marks the start of the Local Nature Reserve, some 200 metres beyond our garden, but I have not seen a squirrel our side of the fence since December 11th. We have been trying hard to keep our supply of bird food topped up, and the squirrel in question discovered a feast of fat balls inside the feeder that hangs from the Silver Birch. 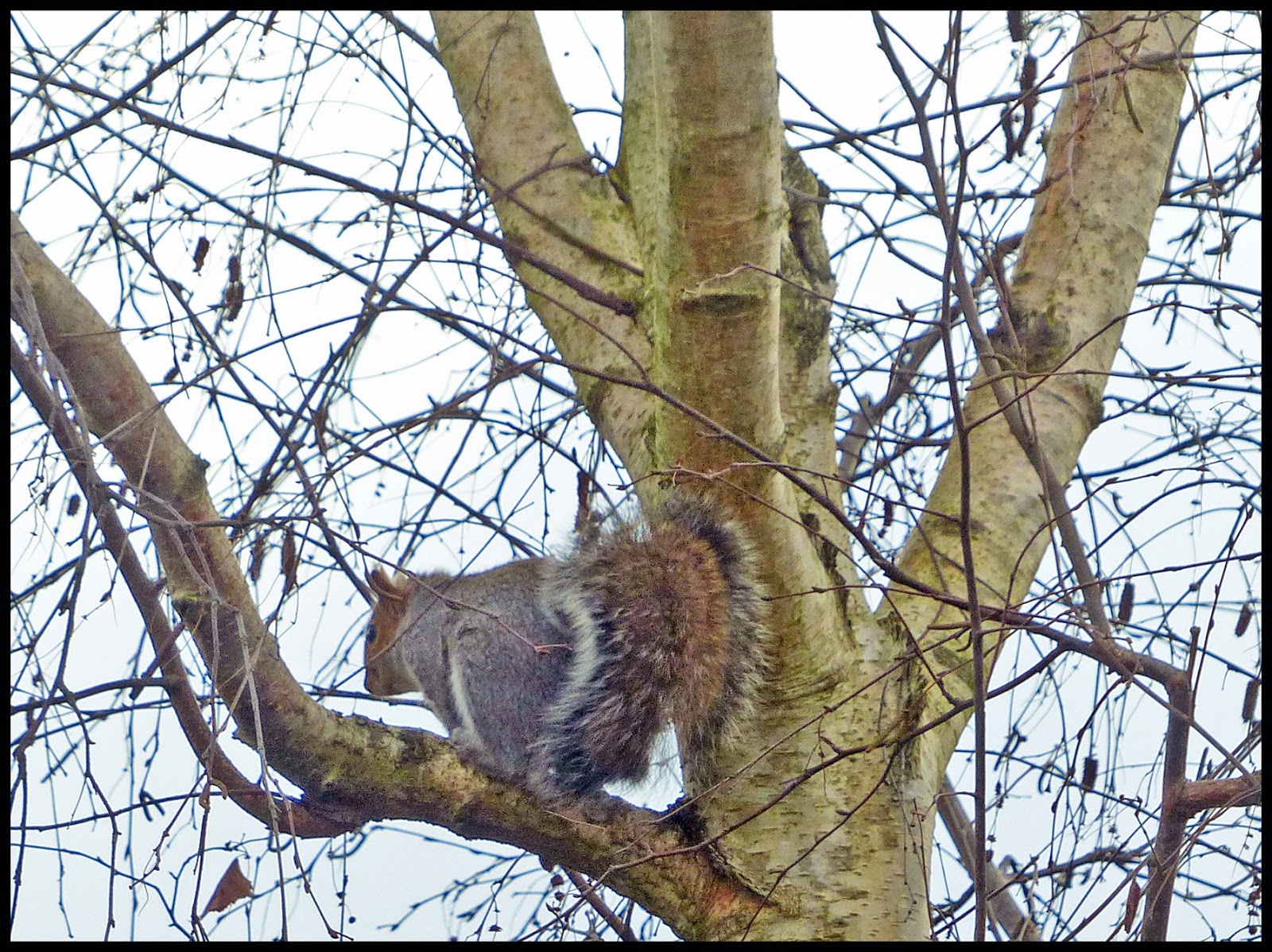 The creature climbed, dangled, hung upside down and gorged.

There came a point at which s/he could no longer reach the remaining bits of food, so s/he tried biting the wood on the outside of the feeder to enlarge the hole. I hope it didn't cause indigestion! 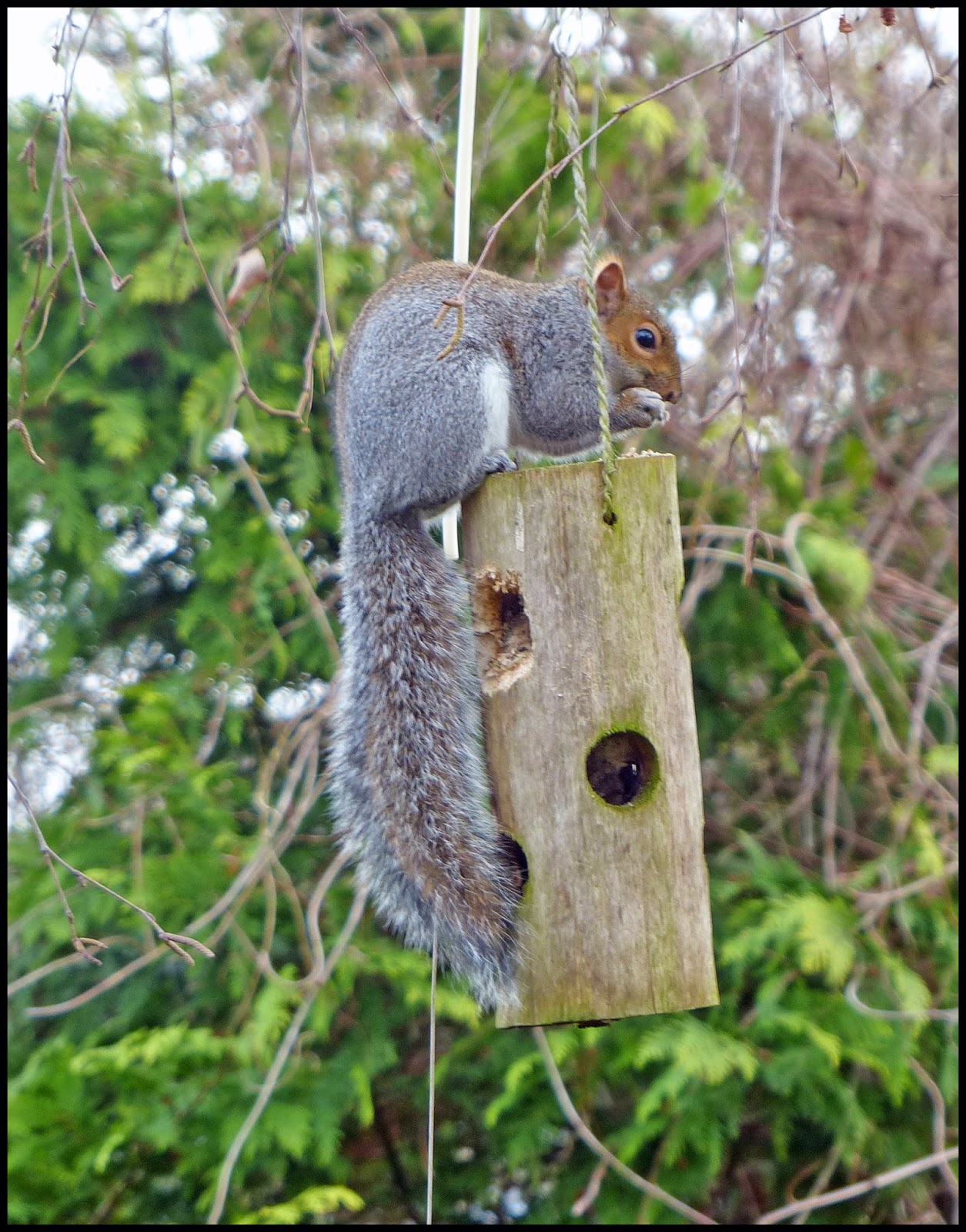 Then when that ploy no longer seemed the best option, the creature simply flipped off the lid of the feeder and climbed inside the cylinder. One very overstuffed Squirrel, and the only mammal noted in the vicinity during this period.

I can't *really* count this as a Tree-Following sighting as it was way up above the Silver Birch, but it was lovely to watch a Grey Heron flying past. This is an infrequent occurrence in my neck of the woods. I noticed a charm of Goldfinches on the Nature Reserve tree on 15 December: I have not seen this species in the vicinity of the Silver Birch since the early summer (May-June post).

David, my husband, spotted the Green Woodpecker on the Silver Birch for the first time. I went to grab my camera, and the bird flew off, so alas, no photos.

We have hardly seen the Great Spotted Woodpecker this month. The Starlings have been frequent visitors, and when they are busy squabbling among themselves and slicing of bits of fat, there is usually a wily Robin underneath, waiting for the bits that fall. I have also noticed the Blackbird in the undergrowth and the Magpies up to their usual dive-bombing antics.

The Blue tits and Great tits have been constant visitors to the coconuts. A Thrush has been seen under the drooping birch branches from time to time. I'm guessing it is a Song Thrush. According to this BTO fact sheet, the little heart-shaped markings would suggest as much, since Mistle Thrush markings are more pointed like arrowheads. 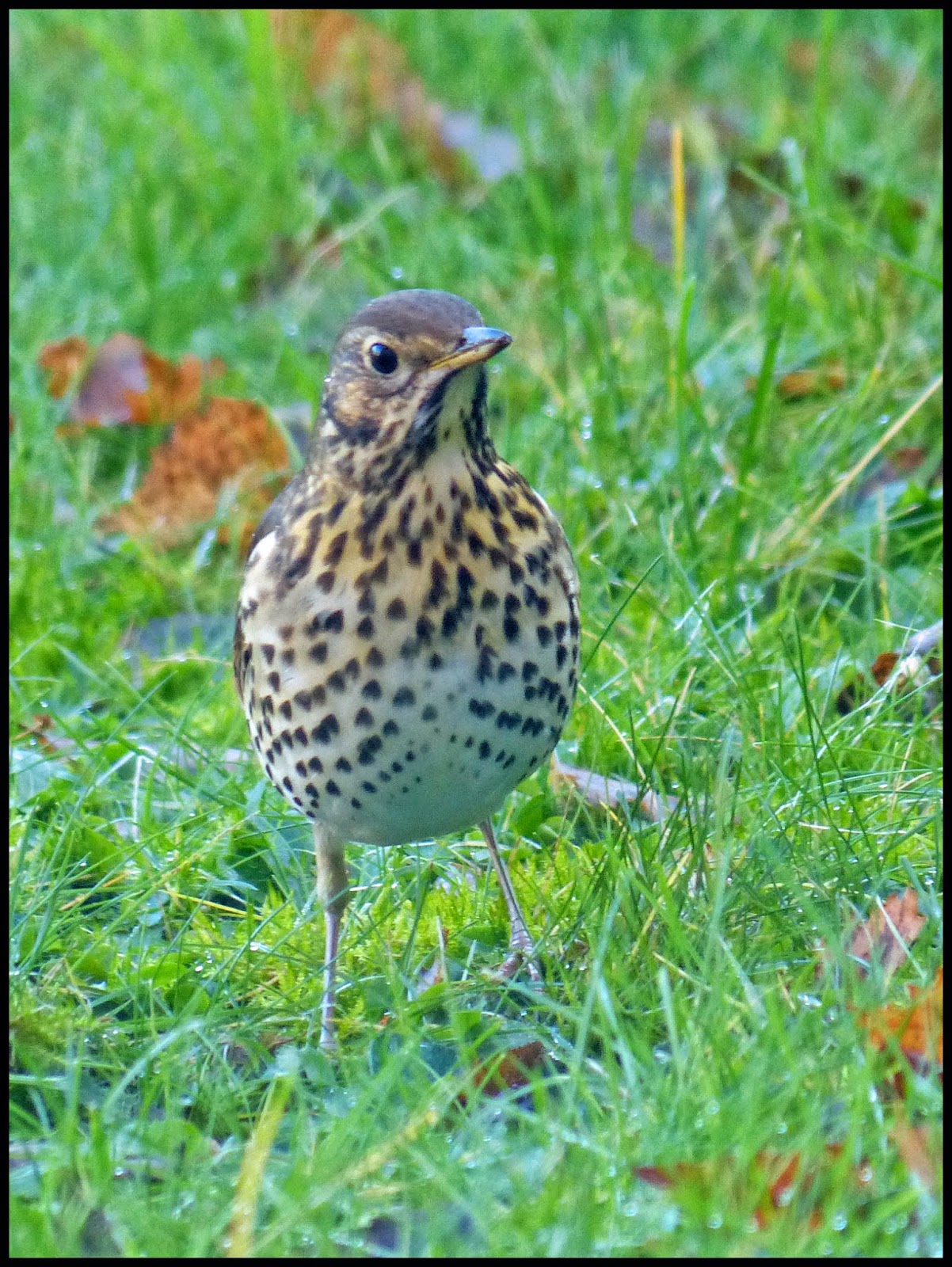 The stars of the Christmas show (acrobatic squirrel apart) have been the Long-tailed tits, who have delighted us with their intermittent appearances. They visit the coconuts on the Silver Birch in groups of three and four and are such fascinating birds to watch as they interact with one another. 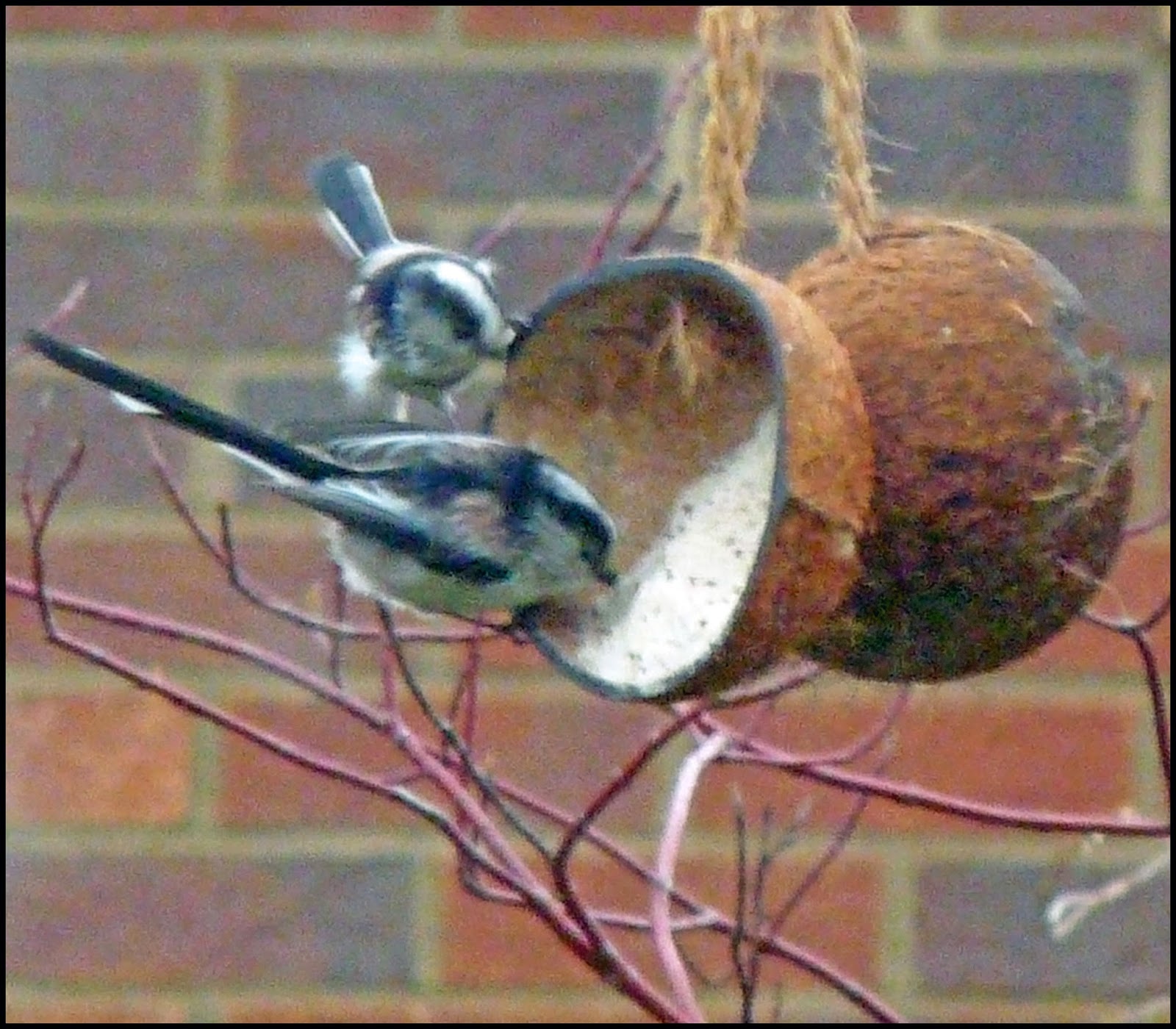 Moving on to insects and other creatures, I have seen a few moths, but these have been less frequent sightings. It was slightly off-limits in terms of distance from the tree, but we had a sleepy seven-spot Ladybird on our front door over the holiday. This morning there was a spider, but it vanished before I could take a close look.

For a list of species seen in, on or around the Silver Birch to date (nothing new to report for this last month), please follow the link here and scroll down.

Don't forget that the RSPB Big Garden Birdwatch is just around the corner, taking place on 24-25 January. And if you can't wait until then, you might consider subscribing to the BTO Garden Bird Watch, which I have only just heard about.

What surprises does February have in store?

Postscript
Just to show that I am keeping my eyes open, here is a mature Silver Birch I noticed on Dunwich Heath some days ago, making my tree seem barely more than a mere sapling! Look at the rather grotesque fungus ... 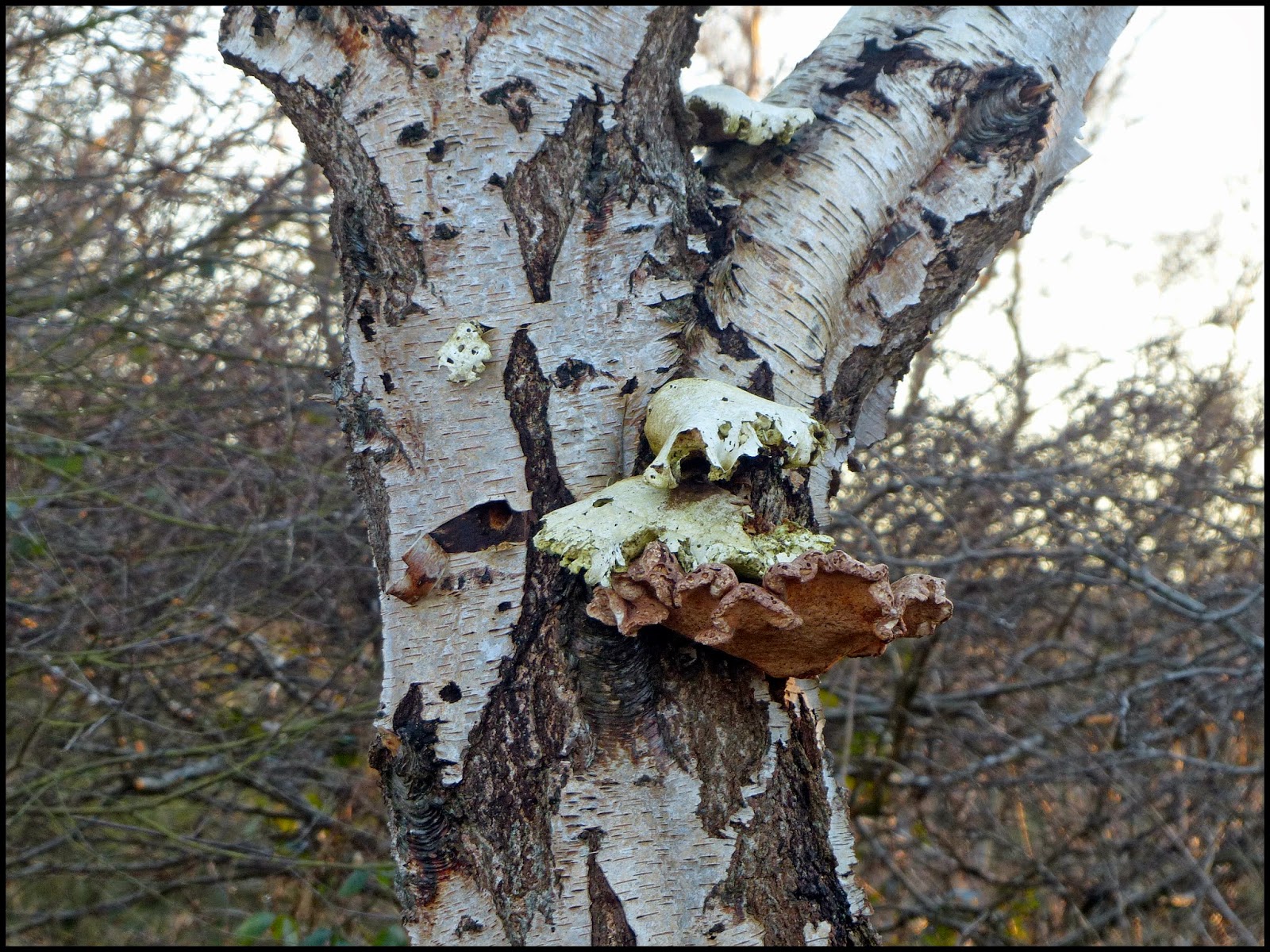 Wonderful photos--it's good to know that your squirrels are just as silly as ours are. The Silver Birch has beautiful bark.

Caroline, thanks for pointing out the "forked twig ends". I just went outside to check my silver birch, and sure enough, there are very young catkins on the tips of the branchlets!

Sara at Come Away With Me said...

Hello Caroline. I can already tell I am going to be learning a LOT about trees and the creatures that spend time around them! Your post was very entertaining - that squirrel was very ingenious and determined, as all squirrels seem to be. I look forward to learning more about your silver birch as the year progresses.

Oh, wow. I haven't seen a silver birch in years. Thanks for reminding me about how lovely they can be. <3 squirrels.

Lovely photos - I do love silver birch trees, don't seem to see as many of them as I remember from childhood. Love all the birds you get visiting too, especially the long tailed tits, one of my favourites.
Cathy

Hello Caroline, thanks for commenting on my blog.
Silver birches are lovely trees and I've enjoyed reading about yours.
I always enjoy watching the antics of squirrels, and lucky you seeing long-tailed tits as you do.
Flighty xx

What a great post! I think I have been taking silver birches too much for granted, as I see skinny ones around all the time.
I particularly like the fungus on the old tree (probably sucking the life out of it?)
Your squirrels seem even worse than ours. I have given up trying to defeat them and now put out more food and just hope there will be some left for the birds by the time the squirrels have finished gorging (your choice of word and a very good one for what they do).
As for thrushes, if in doubt, I wait for them to take off and then I can be sure, as the songthrush has orange under its wings, while the mistle thrush has white. Occasionally in winter we might also see a redwing, which of course has red under its wings. I suspect you get more of those in the east of Britain.
All the best :)

They may be common, but I still like silver birches! Had to smile at your squirrel - we seem to have squirrel-proofed most of our feeders now but there are plenty of hazel nuts around instead! Lovely thrush :)

Now your squirrel has found an easy way in . . will that be its first choice of route t food from now on?

Like Hollis, I will now have to go and look at twig ends. There's a tree near me which I think is a silver birch. It grows up from the side of an old railway embankment so I am level with its top branches but can never see its trunk. An odd situation!