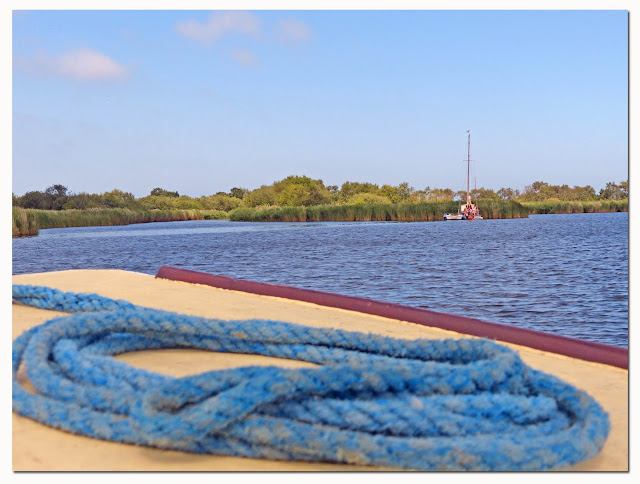 The sun shone brightly on Bank Holiday Monday. We made a prompt start and were soon arriving at Horsey on the Norfolk Broads. We booked in on a wildlife cruise aboard the Lady Ann, and it was not long before we were setting off across the wide expanse of Horsey Mere. The water is practically free of the large Broads cruisers, due to the height of the bridge at nearby Potter Heigham. As we sailed towards the little island of reeds in the photo above, I kept feeling as though we had stepped out of the pages of Arthur Ransome's Coot Club! 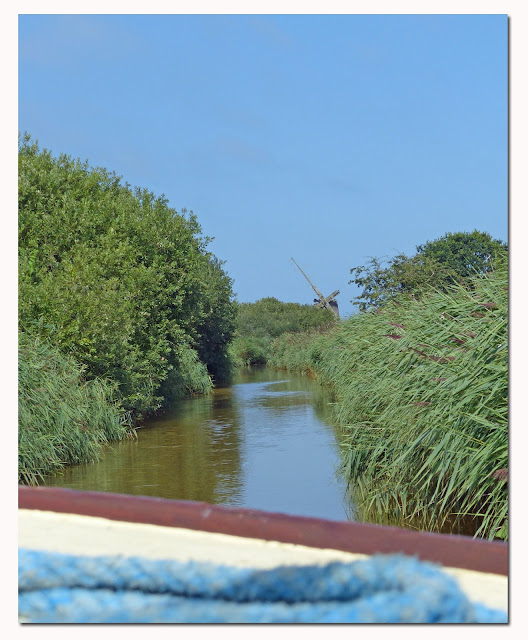 We embarked on a voyage of discovery up a small dyke. It was very narrow and shallow, and provided good wildlife opportunities. A Marsh Harrier quartered the adjoining meadows from above. 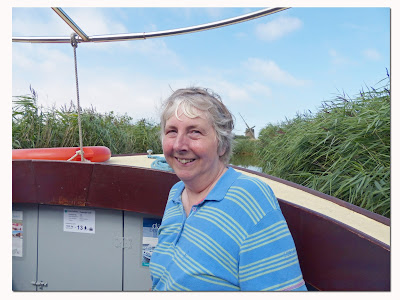 As I looked around, the derelict vision of Brograve drainage mill came into view. 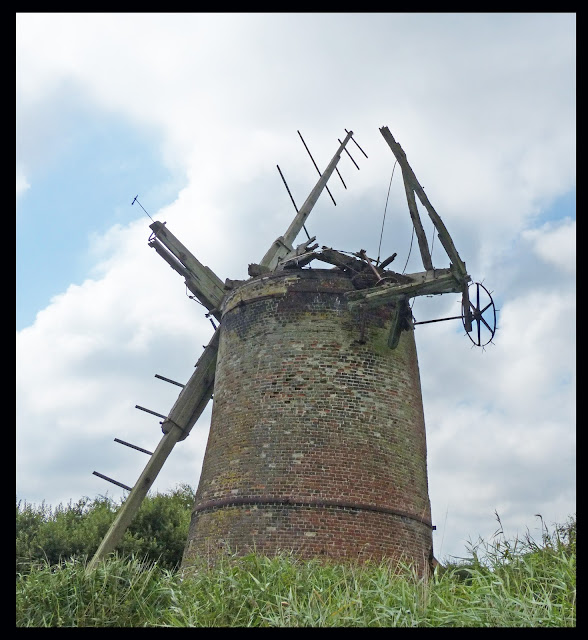 The photo above was lightened by Photoshop, but I actually think ... 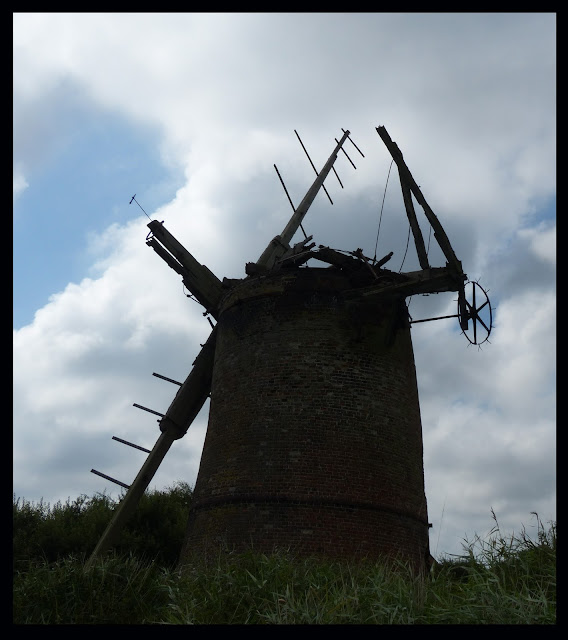 ... that this silhouetted view is more evocative. 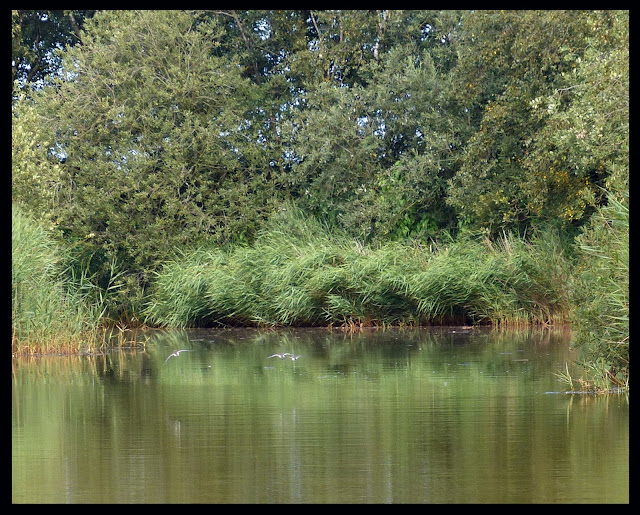 The photo above shows a trio of Sandpipers, skimming up the dyke. 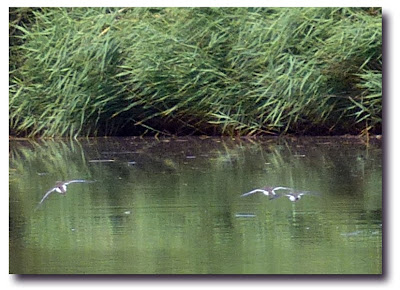 This is an enlarged shot of them. Our guide told us to keep an eye out for a Kingfisher, and there on cue - astonishingly - was the said bird. It did a quick fly-past and was gone, but I saw the brown plumage turn in a flash to its familiar iridescent sheen of turquoise and amber as it flew out of the shadow. Sadly there was no time even to contemplate a photograph.

So what else did we see? Well, Peacock, Large White and Small Tortoiseshell butterflies in profusion. David caught sight of a Water Vole, but it eluded me. There were also a number of dragonflies, particularly Common Darters and Brown Hawkers.

All too soon it was time to head back towards the staithe. You can see the 5-storey Horsey Windpump in the photo below. It is in the care of the National Trust. 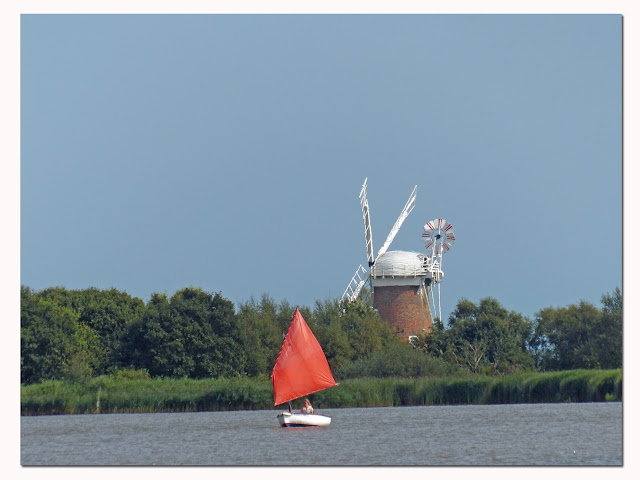 You can read about more about it here. 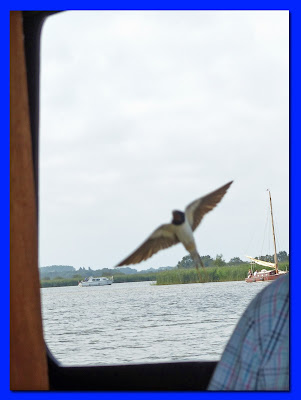 One of the special things about this wildlife cruise was that we were sharing the boat with a nest of near fledgling Swallows. The parent bird zoomed off at regular intervals, and returned with food for the young. It seemed quite extraordinary to me that the birds appeared to be unperturbed by the moving nature of their temporary home. Shades of the dove on Noah's ark, perhaps ... 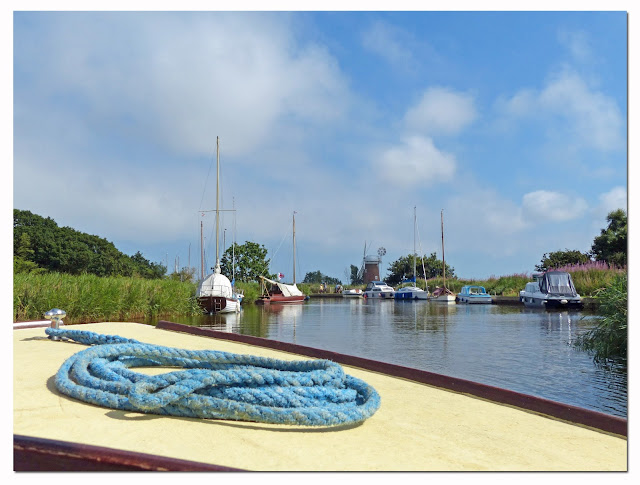 So here we are, making our way up the staithe ... 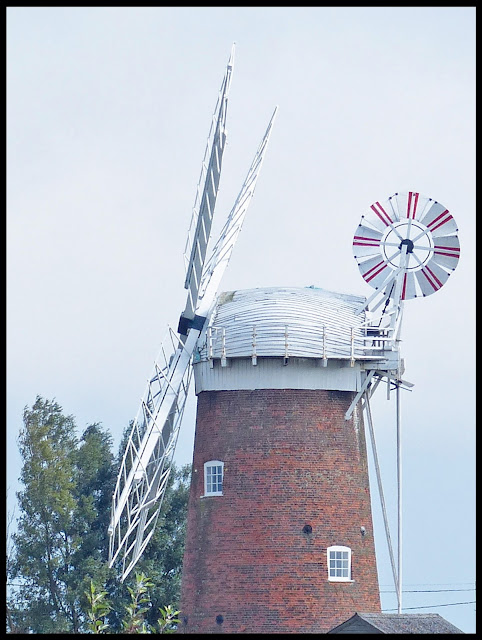 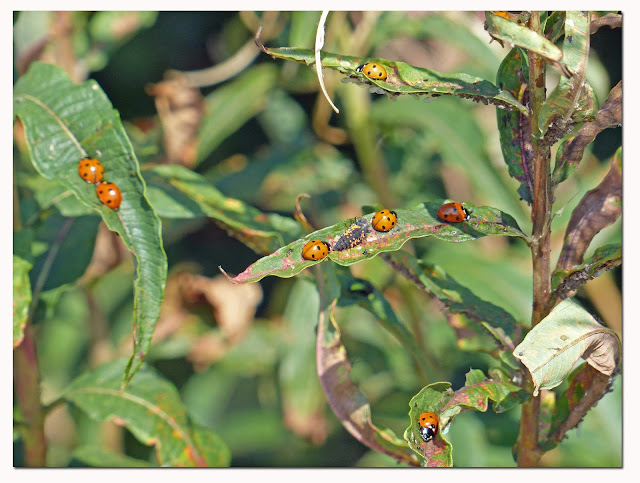 There were lots of 7-spot ladybirds along the towpath. You can see some of them in the photo above. You can also see a larva ... 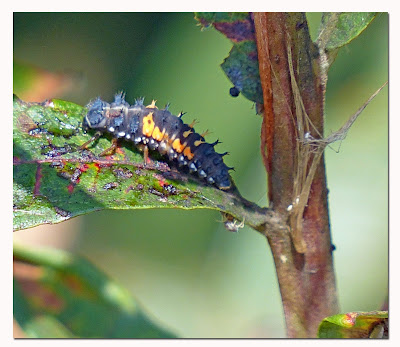 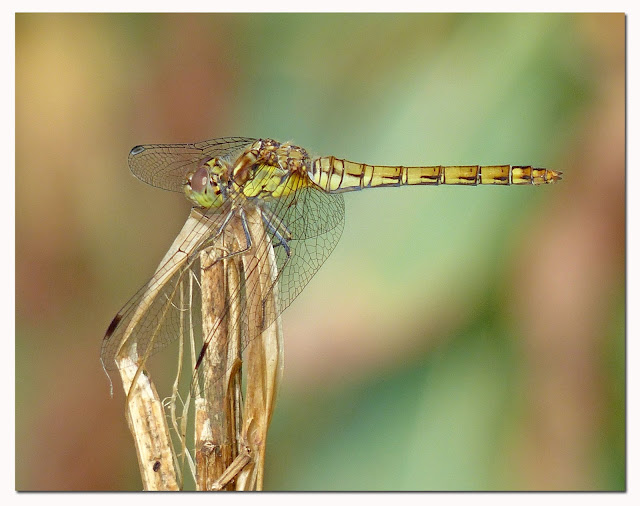 This is one of the female Common Darters. Another landed on the brim of David's hat on a couple of occasions!

Horsey Mere ~ what a great place for wildlife of all kinds!
Posted by Caroline Gill at 22:45

What a fun time on the wildlife cruise. The scenery is pretty and you saw some great birds. Love the cute ladybirds and darter. Lovely photos, Caroline.

Hello Caroline, if i were there i am always going out with you, haha! I smiled at your double posting of the old windmill your real photo is more expressive to me too. And finally, i laughed when you really can't miss the sightings of the ladybirds! I wonder where they went in our place as there's a lot of food but they are all gone, except for a larva i chanced upon the other weekend i went home. Best regards. I will be posting my out of town excapade in my other blog AITL!

looks like a wonderful cruise! Lovely to share the boat with the swallows! And a marsh harrier, how amazing. Apparently one flew over Musselburgh yesterday or the day before, but it didn't hang round!

I am enjoying your cruise (virtually) from my computer on Labor Day, 2013. How beautiful all, and you are so connected. Some time, I would love to go on one of these nature outings with you and David. I felt "sparked" and truly at home on Horsey Mere. Love that name!

oh my goodness how i wish i could have gone on this cruise with you. you've seen a bit of everything. i simply loved those windmills. it's nice to see some places that keep wildlife nurtured and not stunted. hope all is well. have a great day~